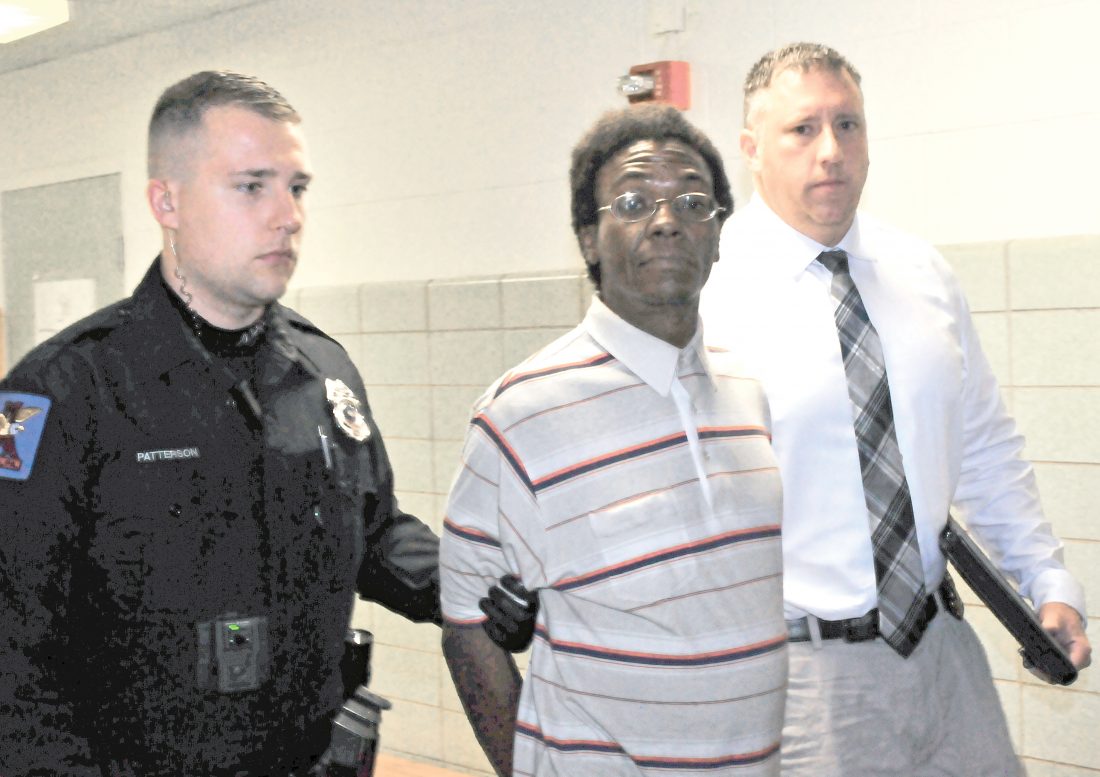 A registered sex offender who spent more than two decades behind bars for the rape of a 17-month-old girl in 1992 is now accused of raping a 15-month-old boy in Altoona last summer.

Altoona police allege Ferdy Antar Crutcher, 45, of 1914 14th Ave., raped a 15-month-old boy in the early morning hours of Aug. 11 before leaving the seriously injured child “in some weeds and gravel on the side of the alley” on the 900 block of Lexington Avenue, according to charges filed Thursday night.

Altoona police were dispatched to an apartment on the 800 block of Lexington Avenue about 3:30 a.m. Aug. 11 after the boy was reported missing. As officers searched the apartment and surrounding area, the child was found in the alley, rushed to the hospital and flown to UPMC Children’s Hospital of Pittsburgh.

Police said the boy was covered in blood with injuries to his face and torso. He was undressed from the waist down.

According to the charges, the boy’s diaper was found in the weeds nearby.

His doctor at Children’s Hospital told police the boy’s injuries were deliberate and described them as “near fatal,” Altoona police Detective Sgt. Terry Merritts wrote in the charges. The boy suffered injuries to his face and torso as well as numerous fingernail scratch marks on his body. The 15-month-old also had “handprint bruising” on his shoulders and upper arms, and both his eyes were swollen shut.

There were also injuries that indicated the boy had been sexually assaulted, the doctor told investigators.

Police indicated in the charges that a sexual assault kit was performed at the hospital, and sperm and blood were found, but testing showed there was insufficient DNA to find a match.

However, sperm found inside the back of the diaper was sent to state police for testing, and after it was entered into the Combined DNA Index System at the state and national levels, Crutcher was identified as a match.

During his arraignment Thursday night, Crutcher spoke about his 1992 arrest and subsequent guilty plea in the rape of a 17-month-old girl in Johnstown.

“I took the baby out of the crib upstairs, and I don’t even know what I did,” Crutcher told Magisterial District Judge Daniel DeAntonio, first describing how he had been at a party and “went crazy” after someone “put out some white stuff on the table” and he snorted it. “I confessed to rape. The judge gave me eight to 22 years. I maxed out the whole thing,” he said.

Crutcher is currently a lifetime registrant under Megan’s Law, and when police went looking for him with a search warrant for a DNA swab on Wednesday, they were told he was staying at an address other than where he was registered. When police got in touch with Crutcher Wednesday about the swab, he agreed to meet and provide it, police noted in the charges.

When he was questioned about the 15-month-old boy, be initially lied to investigators, police said.

Crutcher said he knew the child’s family and had been at the apartment on Aug. 11 and only took the child outside because the boy’s grandmother, who he claimed to have a relationship with, asked him to because the boy wouldn’t stop crying.

Crutcher told police he was walking with the boy, who was only wearing a diaper, and got scared when he saw someone walking toward him in the alley because he was a registered sex offender and was out in the middle of the night with a small child. He claimed he put the boy down in the bushes and ran off.

Crutcher claimed he only learned about the boy’s injuries the next day through the news and said he didn’t know how the boy could have been injured. He also claimed someone must have planted his DNA in the boy’s diaper in order to send him back to prison, police noted.

Police pointed out that Crutcher then broke down and cried for several minutes after investigators pressed him about the boy’s injuries and that his DNA was found in the diaper.

Crutcher then told officers that he had lied and then claimed he was having a sexual relationship with the boy’s grandmother and when he stopped by the apartment that night, the boy was injured bloody and crying, but still walking around and crying.

After he had sex with the grandmother, at her request, she instructed him to take the boy to where he was left and to smear blood on the side of the KNY Family Fitness Center building to fake a crime scene.

Crutcher said he did as he was told and ran home after leaving the boy and disposing of the diaper in the weeds in the alley. He said he stayed up for two days and monitored the news to see if there were any reports about the boy, police said. Crutcher told investigators he “smiled” when he learned the boy had been flown to a Pittsburgh hospital because he was worried he might have died.

Police said Crutcher knew details of the boy’s injuries and the crime scene, particularly the location of the diaper, as well as the layout of the apartment that were not released to the public. When confronted with this, Crutcher allegedly had nothing further to say.

At his arraignment, Crutcher told the court he moved to Altoona immediately after he was released from prison five years ago in October. He said he doesn’t have a job and receives disability payments.

Crutcher, who has a ninth-grade education, noted his criminal history started in high school with “stupid stuff” like stealing purses and crushing up Tylenol so it looked like cocaine in order to sell it to a girl he knew.

When asked about his mental health history by the judge, Crutcher said he is diagnosed with paranoid schizophrenia, depression and anxiety and that he stopped taking his medication.

When DeAntonio asked for the commonwealth’s position on bail, Merritts told the judge that the Blair County District Attorney’s Office was seeking a high cash bail and pointed out that a newspaper article from May 7, 1993, related how Crutcher wanted to recant his guilty plea while he also said, “he needed to be incarcerated because he was afraid he would do these things again.”

The detective noted that the child in the 1992 rape required reconstructive surgery because of her injuries.

Merritts also told the court Crutcher had made statements while in custody about harming himself and not going back to prison.

DeAntonio pointed out that a conviction on the charges could lead to a life sentence and denied bail for Crutcher.

“This case is a stark reminder of the dangers posed by individuals who seek to prey on children,” Weeks said. “However, it also illustrates how a combination of dogged police work, dedicated crime lab analysis and a determined collaboration among multiple agencies can solve some of the most egregious crimes against the most vulnerable members of our community.”

Crutcher remains in Blair County Prison and is scheduled to appear at Central Court on Wednesday for a preliminary hearing on the charges.

The Southern Cove/Yellow Creek Ministerium is providing a virtual baccalaureate service for the seniors at Northern ...

Correction: Attorney Richard L. Ducote of Covington, La., has clarified that a lawsuit he filed on behalf of an ...