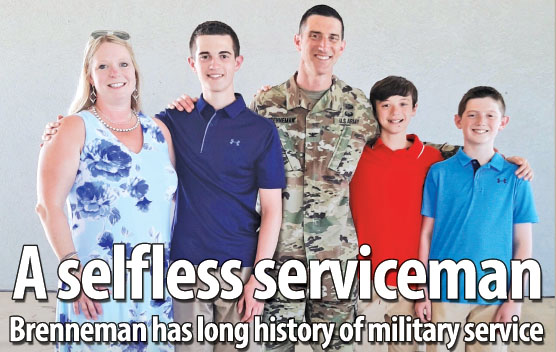 Colonel in the U.S. Army Reserve. Lawyer. Community servant. Mentor. Father. Scott Brenneman, 45, of Hollidaysburg, has many facets but takes a laser-focused approach to each day’s challenges as he incorporates “selfless service” to his family, community and country.

Brenneman was raised in Hollidaysburg, went off to college and served in the U.S. Army for about nine years, which included two deployments to Iraq. Today, he continues to serve in the Army Reserve.

“I wanted to serve. I wanted to serve something bigger than me,” Brenneman said with emotion choking his voice. Selfless service is what he is trying to instill in his three sons, whom he refers to as his lasting legacy.

A member of the Pennsylvania Bar Association, Brenneman works full-time at Sheetz offices in Claysburg as director of security and risk.

How he came to be at the company reinforces his belief that you must squarely face each day’s challenges. Like when he became a “reduction in force” as a deputy general counsel at the former National Drug Intelligence Center in Johnstown. As operations at the center declined, he attended meetings where the supervisor wrote eliminated positions on a white board and he was shocked to see his title on the list.

Within minutes of returning to his computer’s email, a co-worker informed him of an opening at Sheetz as an associate counsel. In the eight years since landing at the convenience store headquarters, he’s been promoted several times.

Early in his career, Christine Bender, of Belsano, now a claims and litigation manager at Sheetz, reported to Brenneman when he served as associate counsel.

“As a boss, Scott speaks well of his team and gives credit when it’s due. He does what he says he is going to do and has an open door policy when it comes to communication,” Bender said. “He asks his team for help and advice. He admits when he is wrong or doesn’t have the answer … and then finds out the answer and gets back to his team.”

Bender especially praised Brenneman as a mentor “who listens with such great intent. He is one of the most genuinely caring people I’ve ever met.”

Compassionate, loyal, an epitome of integrity and a positive attitude are oft-repeated descriptions among Brenneman’s longtime friends, like Army Maj. Joshua Roby of Fort Bragg, North Caroline, and Sean Connolly of Hebron, Connecticut, who served as an Army judge advocate general officer at Fort Campbell, Kentucky.

Connolly and Brenneman first met almost 20 years ago during basic training prior to both being assigned to the Office of the Staff Judge Advocate at Fort Campbell.

“From the beginning, I saw Scott as a different kind of guy,” Connolly recalled. “Not only was he very smart and capable, but he was also a compassionate leader who was very disciplined in everything he did. He was someone I wanted to be like.”

The men, and the women who they’d marry, would become devoted friends. When Brenneman married his wife, Lisa, in a ceremony with full military honors, Connolly participated in the saber ceremony. Four months later, when Connolly was getting married in Arlington, Virginia, Brenneman planned to return the honor. But it wasn’t to be.

As they headed to the airport for their early morning flight, a drunken driver crashed into the Brennemans’ vehicle, critically injuring the newlyweds.

“Obviously, they never made it to our wedding. Instead of going on our honeymoon, we spent the next two weeks with them and their family at the hospital in Nashville,” Connolly said. Lisa faced a long rehabilitation so Brenneman took a position as an assistant professor of constitutional law at West Point, New York.

While at West Point, it is practice for new cadets to be mentored by an upper level officer. Roby became “adopted” by the Brennemans, he said after he met the couple through his roommate who was officially assigned to Brenneman. “He was the first officer I met to demonstrate servant-leadership,” Roby said. “It was never official, but possession is nine-tenths of the law,” Roby said. “Over time, he and Lisa both included me and Andy (his roommate) in everything. He was always putting me and Andy ahead of himself. That’s what I remember most.”

Roby often traveled to Altoona from West Point with the Brennemans to see his girlfriend, a student at Penn State Altoona. During the Presidents Day 2003 weekend blizzard, Roby was ordered back to West Point no later than Monday.

“He drove us through 4 feet of snow on the highway and we made it back. A lesser man would have said, ‘there is nothing I can do,'” Roby said. “He demonstrated what it looked like to be a servant-leader, and I’ve tried to emulate that in my own career. He showed me what it meant to put subordinates first.”

“He’s a prime example of continuous self-improvement. He doesn’t waste a minute. … He’s constantly reading or listening to tapes as he travels to his assignment in Ohio. He is a leader who works hard at self-improvement to get to the next level and still maintains his compassion and selflessness to help others do the same … He is of the utmost integrity. You won’t find someone with a higher character than Scott.”

The Broad Top Area Medical Center in Huntingdon County has received a $1 million grant from the U.S. Department of ...