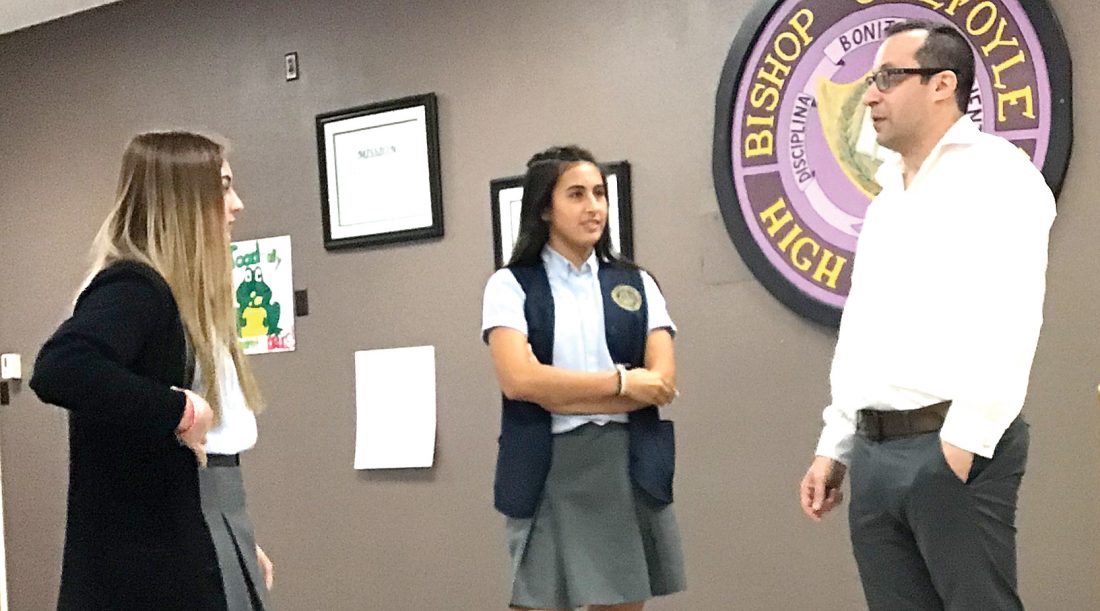 Courtesy photo Frank Cascino speaks with Amelia Partner (left) and Jaden Quinn after he gave a presentation Monday to detailing his life as an addict and his recovery efforts to Bishop Guilfoyle students.

There are many paths to addiction: It may be modeled by parental figures; it may be developed while coping with a job loss; or it may be caused by mismanaged pain treatment.

But Frank Cascino of Johnstown said for him it began in middle school with social anxiety.

Cascino, 46, has been sober for eight years.

“I wish I understood the power of my voice when I was very young,” he said. “Why do I feel like I have to have a substance in me to feel like I fit in?”

After 20 years of putting drugs into his body daily, he found his voice and shares it with students in area schools.

On Monday, he spoke to the 330 students of Bishop Guilfoyle Catholic High School.

“I had problems with social anxiety, sleep and what I didn’t understand was I thought that I had to have a substance in my body to fit in,” he said.

After his presentation, several BG students told him what a powerful message he had.

Drugs are a constant topic discussed by Student Assistance Program teams at BG and across the state, said BG counselor Tori Wilsoncroft.

So when Cascino called BG and asked to deliver a message, Wilsoncroft said she was eager to schedule him.

“Every drug is a gateway to another,” Cascino said. “For me it was alcohol. I became a heroin addict the first time I got drunk,” he said. “It started with alcohol a couple times a week — as time goes on, it’s an everyday thing. For 20 years, there wasn’t a day when I wasn’t putting some substance in my body.”

“By the time I got to heroin, I had no social anxiety. I had a substance to fix that. When heroin came along, some of my friends were doing it. I mistakenly thought ‘there’s no way one little line will hurt me,'” he said.

In addition to injecting, heroin can also be snorted in powder form and smoked. Cascino snorted heroin.

It awakened the feeling he experienced in high school of taking Vicodin when he had some teeth pulled.

“I was on heroin for three years. I switched to prescription painkillers because they were easier to get a hold of. I could drive all over town and get it that way,” he said.

He remembers the day he decided to get sober.

“The treatment process was incredible. I loved every second of learning about addiction, how it was dominating my life. I’ll never forget this. The last time I took a handful of painkillers and sleeping pills, I thought how awesome could it be to turn this all around and tell the real story about addiction. It feels amazing — eight years ago, I thought of it and I’m doing it now.”

People often as ask Cascino why he takes his story to public platforms.

“I do this because the stigma keeps people in addiction. So many people and families are affected by it,” he said. “If people could just see how you can change your life — you can do positive things; you can be forgiven; you can walk away from the darkness of that life and see the light.”

Making positive connections with trusted people is crucial to solving problems without drugs, he said.

“I encourage them to use their voice to have tough conversations about how they feel rather than use drugs. I think the fear is there are so many ways for students to communicate, they don’t want to be embarrassed in their school,” he said. “I tell kids to have conversations with special people in their life, people they can trust about topics like how it feels not fitting in, depression, even just not getting enough sleep.”