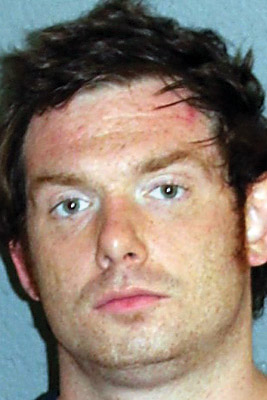 A Hollidaysburg man is in jail, charged with aggravated assault, resisting arrest, criminal trespass and harassment after a fracas with Hollidaysburg Borough police on Saturday.

Police were called to TK’s Sub and Six Pack because Steven T. Bender, 25, refused to leave, after being asked repeatedly by the store manager, because he wouldn’t quit trying to hug and text his girlfriend, who was “uneasy” about his advances, according to the affidavit of probable cause.

Police drew Bender out of the store, persuaded the manager to write a “no-trespass” notice, presented it to Bender and told him repeatedly he had to leave, according to the affidavit.

Bender refused, continuing to sit on the porch, and after “one final warning,” police moved to arrest him, but when an officer grabbed his arm, he pulled away, according to the affidavit.

Officers then took Bender to the ground, but he continued to resist, punching one officer in the face and kicking another in the face, according to the affidavit.

The first officer used a Taser on Bender, enabling them to get him under control, according to the affidavit.

Bender is in prison in lieu of 10 percent of $15,000 bail, according to state online records.