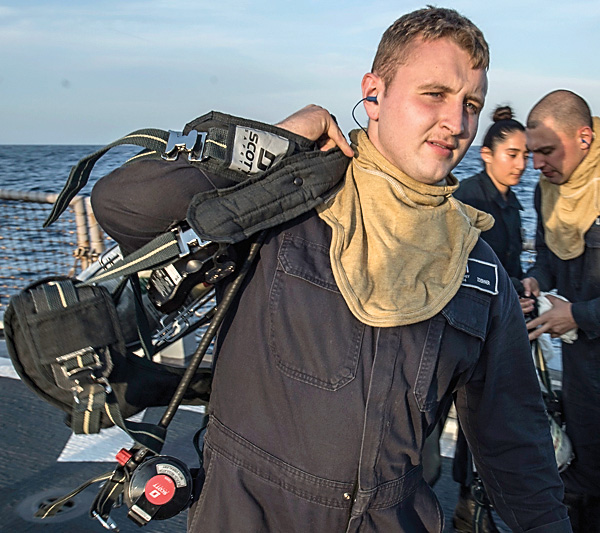 Compared to a life at sea exploring the seven wonders of the world, Huntingdon might not seem like much, but for U.S. Navy Hull Maintenance Technician 3rd Class Mark Zoerner, it’s home.

And Zoerner said he plans to return after his four-year enlistment is complete.

“I enjoy being out on the water more than in port,” Zoerner wrote in an email. “Traveling outside of the U.S. is a great experience, but it makes you appreciate all of the freedom we have back home.”

The Navy did not permit the Altoona Mirror to interview Zoerner directly, opting instead to let him respond via email to written questions.

Aboard the USS Carney, an Arleigh Burke-class guided-missile destroyer, Zoerner said he spends his days welding and plumbing. During his downtime, the 21-year-old Huntingdon Area High School graduate enjoys playing golf, working out and keeping tabs on the Philadelphia Eagles, he said.

“Ship life is good at times,” Zoerner wrote. “The food is not the best.”

On the home front, his dad, Ralph, said he couldn’t be prouder of his son.

But being a Navy dad isn’t always easy.

“Not being able to see him when he’s out to sea is the hardest,” Ralph said. “But he calls home every chance he gets.”

Keeping in contact became all the more important for the two when Ralph received difficult news from his doctors Aug. 7.

“I just found out I have Stage 4 cancer,” Ralph said. “Mark’s taking emergency leave to come visit, but I don’t know when he’ll get in, so I plan to stay up and wait. We’ll get the family together and go to Texas Roadhouse for dinner.”

Despite Ralph’s condition, the 72-year-old U.S. Army veteran said he hoped Mark could spend his leave enjoying time with family and friends, rather than worrying about his dad.

“I just want him to have a good time,” Ralph said.

Though he served in the Army during the Vietnam War, Ralph said if he could do it over again, he would likely join the Navy.

“I was on cloud nine when Mark told me he was signing up,” he said.

A few years before Mark was born, the family moved to Huntingdon, where his grandfather was the minister at a local church.

“We were living in Virginia before here, and I was working as an office machine repair technician in the Washington, D.C., area,” Ralph said. “But when a search of a nearby school revealed dozens of weapons in the students’ lockers, I knew we had to move.”

The middle child of seven, Mark spent much of his youth playing sports.

“He played basketball and football, then wrestled for the high school,” Ralph said. “He was always very dedicated.”

Athletics wasn’t the only scholastic activity in which the sailor excelled.

“I had Mark in my class three to four years ago,” Tomlinson said. “He was a solid student.”

When Mark told Tomlinson he enlisted, the Spanish teacher said he wasn’t surprised.

“I said, ‘Follow your heart,'” Tomlinson remembered. “He had a great sense of humor. He could make both his fellow students and teachers laugh, but he was always respectful, too.”

After graduation, Tomlinson didn’t stay in touch with Mark, but he said he occasionally hears news through the grapevine.

“Last I knew, he was in Spain,” Tomlinson said. “I feel like he had a lot to offer no matter where he went.”

Mark didn’t list the ports he’s visited, but said he’s been to at least 12 during his two years in the Navy.

“Egypt was probably my favorite — getting to see the Great Pyramids,” he wrote.

After the Navy, Mark said he might attend college, and his dad said the sailor might start a local welding business.

“I think it’s great he became a hull technician,” Ralph said. “The biggest thing he wanted to do was welding, because that will be real useful once he gets out.”