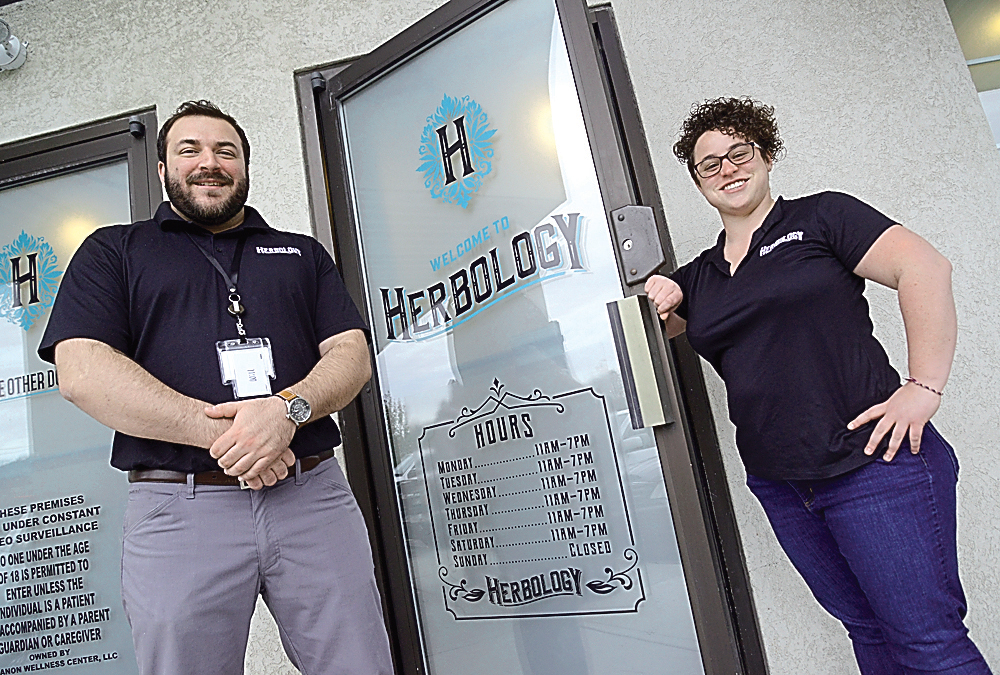 Herbology Pennsylvania Operations Manager Will Agganis and Regional Operations Manager Candace Weitzman were on hand at the opening on Monday of Herbology, the city’s first medical marijuana dispensary. Mirror photo by Patrick Waksmunski

As he waited to pick up his medicine, one patient who did not want to be named said he was very excited about the dispensary’s opening at 514 E. Pleasant Valley Blvd. in the Rosehill Plaza.

“I can get it legally. I don’t have to be worried about being drug tested at work. I feel like I am doing the right thing,” he said.

Herbology pharmacists serve patients with cannabis products, including flower, ingestible and topicals, canna­bidiol products, concentrates, oil vape cartridges and disposable vape pens, all of which must be taken off-site before use.

The Altoona location is much more convenient for patients, including Steven Carroll, 38, of Tyrone, who uses medical marijuana to treat a seizure disorder.

He said he used to have to drive to a dispensary in Pittsburgh. Then, when a dispensary opened in State College, that reduced his drive. But now, he is only 15 minutes away from the new dispensary in Altoona.

“I’ve waited years or this to happen. It helps me with transportation, and it gives me something I don’t have to worry about becoming chronically dependent on,” he said, referring to prescription opioids and painkillers.

“It is better for people in Pennsylvania to have this as an option,” he said.

Herbology opened at 11 a.m. Monday and closed at 7 p.m. In the middle of the day, about 3 p.m., 60 patients had purchased medical marijuana and 20 others were waiting, said dispensary operations manager Will Agganis.

Herbology is the management company for Lebanon Wellness Center LLC. The company received a state permit to open the Altoona dispensary in June 2017, but faced some obstacles.

“It took a while to get everything open. It’s a regulatory process with security aspects and procedures. Beyond that, it was construction,” Agganis said. “I know it’s been months and people were waiting.”

On Monday, medical marijuana patients seeking a dispensary in Altoona didn’t have to wait any longer.

“It’s been crazy. Patients have been fantastic and very forgiving of the state’s glitchy computer system. That’s been frustrating. It slows down the process,” Agganis said.

The Pennsylvania Depart­ment of Health qualifies a variety of ailments to be treated with medical marijuana.

Agganis noted that pa­tients use medical marijuana and wean themselves off of dangerously addictive opioid medications.

“People with these ailments use opioids usually. And they can be super addictive. Cannabis can be addictive too, but studies have shown it is less addictive than coffee,” he said.

The cost is between $100 to $250 for registration, depending on the doctor, Agganis said. In addition, the state charges $50 for the actual card.

Some doctors can bill the fee to insurance, but the actual purchase of the marijuana products won’t be covered by insurance.

“I hope that will be addressed,” Agganis said. “The health insurance system … the federal government doesn’t recognize cannabis as medicine.”

The act authorizing medical marijuana defines a “serious medical condition” as any one of the following: