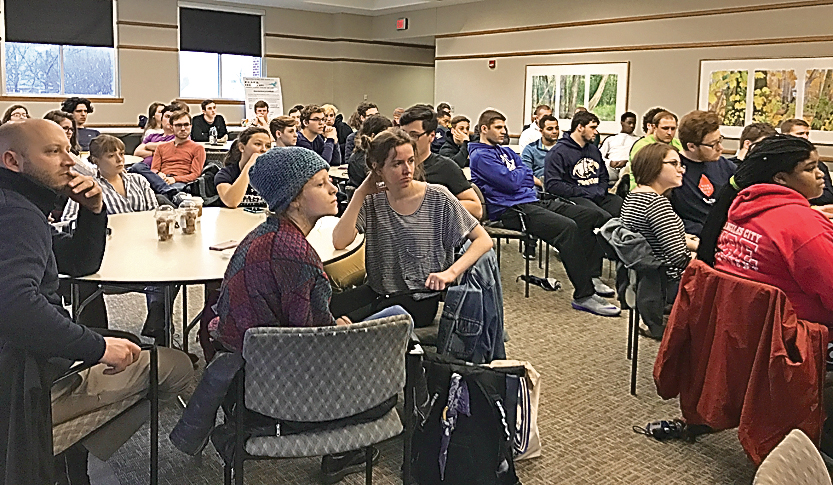 Juniata College students take in bystander intervention training that will help them take a role in responding to sexual violence on campus. Courtesy photo

Curbing the problem of sexual misconduct on campus involves more than commitment by universities.

In Huntingdon County, Juniata College had nine founded reports of rape on campus in 2016. The numbers are recorded in its annual security statistics available online.

The 2016 statistics represent an increase from the two years prior, when there were only two rape cases reported per year, like other smaller institutions in the region.

“We don’t believe it represents an increase in the number of incidents; the numbers are increasing to more accurately reflect what’s happening,” said Daniel J. Cook-Huffman, Juniata College’s Associate Dean of Students.

The main difference for Juniata in 2016 was $300,000 from the U.S. Department of Justice’s Office on Violence Against Women. That money is funding campus initiatives designed to prevent sexual assault, domestic violence and stalking through training programs, education and the creation of a new position to coordinate training and education within the college.

The grant allowed Juniata to hire a director for its Office for Prevention of Interpersonal Violence, which guides victims to their options for redress.

“Having a full-time hire who works tirelessly every day to train people and hold discussions and raise awareness and also support survivors has been a central component of our success,” Cook-Huffman said. “For colleges that don’t have the human and monetary resources to work at improved reporting systems and a prevention culture, it will be a much bigger challenge to make progress.”

A bystander intervention program afforded by the grant for students and faculty is to be completed this fall.

Juniata College’s grant was one of 27 awards nationwide totaling $8.5 million.

With fewer than 1,500 students, Juniata College’s nine reported rape cases in 2016 were higher than the five cases reported that year at the University of Pittsburgh, where about 20,000 undergraduates live and learn.

Pitt officials stressed that the annual statistics do not encompass all of the victims who seek some kind of help because in many cases, victims may only seek counseling but do not report it to police or campus officials.

Saint Francis University, Mount Aloysius College and the University of Pittsburgh at Johnstown each reported two rape cases investigated by police in 2016 and similar numbers for the two years prior. Penn State Altoona reported four cases in 2016, which was an increase for that campus. Those statistics exclude other forms of sexual misconduct and harassment.

In only one of the nine cases at Juniata College, the victim sought redress through the criminal justice system. It was not successful. The county district attorney did not have enough evidence for a conviction.

“I think it’s rare for students to seek redress from the criminal system; there’s an historic record of such a high standard of evidence and there’s not a high rate of conviction,” Cook-Huffman said. “And there’s an inherent bias of the system and cultural beliefs in general.”

Title IX is the civil rights law that has guided campus responses to sexual misconduct for the past 25 years.

Campus officials conducting investigations guided by Title IX rely on a “preponderance of evidence,” which is a lower standard of proof than what is required in criminal cases.

Through Title IX, crimes are processed as violations of a student’s civil right to access educational opportunity and can result in various non-criminal sanctions.

After a Title IX investigation, the accused student could be restricted to where they are allowed on campus or expelled.

“In all cases, we certainly use no-contact orders and interim classroom accommodations or changes in schedules during process of investigation ensure the safety of both accused and the accuser,” Cook-Huffman said. “Once completed, if it is found more likely than not that the violation occurred, the punishment is, at minimum, a continuation of the no-contact order or restrictions to where the accused can go on campus or suspension.”

Penn State Altoona counselor supervisor Christine Towns-Metrik said a significant amount of students have visited her for counseling, but have chosen not to report to the police.

“It’s easier for victims not to deal with that. It’s stressful, and they might not trust the outcome,” she said, stressing that Title IX affords protections to victims who would otherwise have no help.

“Another reason why they don’t report is because they don’t want to ruin the lives of the person who harms them. It’s sad,” she said.

DeVos’ proposed changes to existing Title IX protections against sexual assault are a step backward, according to victim advocates who say DeVos’ replacement guidelines discriminate against accusers and discourage them from reporting assaults.

Scrapping President Barack Obama’s Title IX revisions, DeVos’ interim guidelines would allow schools to demand a higher standard of evidence that would make it tougher to prove an assault, permit schools to hear appeals only from the accused and let investigations go on for an indefinite amount of time.

Sen. Bob Casey, D-Pa., is in staunch opposition to DeVos’ plan as the changed regulations appear to conflict with another federal law, the Clery Act, which Casey amended in 2013 to improve how schools respond to sexual assault.

“This conflicting guidance from the Department of Education will make it harder for victims to come forward and will discourage the change that needs to happen to keep young women safe,” Casey said in an August statement.

Universities are adhering to existing policy and are not yet too concerned about changes.

“The reported proposed changes to Title IX regulations have not been re­leased by the Depart­ment of Edu­ca­tion and are still in draft form,” Penn State spokeswoman Lisa Powers said.

A few of the more broad-scale measures include annual mandatory reporter training on sexual misconduct for all faculty and staff and creation of a new standalone office of Sexual Mis­conduct Prevention and Re­sponse (Title IX) with additional staffing.

“We work hard to provide a process for handling sexual misconduct when it occurs that is thorough, fair and provides information and support to both survivors and the accused,” Powers stated in an email.

Investigations and discipline following Title IX investigations are likely one of the most challenging and delicate endeavors an institution will undertake, Pennsylvania Attorney General Josh Shapiro said when he unveiled his campus safety report last month.

“Unfortunately, these types of investigations are still relatively new, and there is not yet a universally agreed upon best practice for how to conduct them,” he stated in the report.

In 35 pages, he recommended, in part, that universities should make policies to eliminate barriers to re­porting sexual misconduct.

Following Shapiro’s report, Gov. Tom Wolf urged passage of several bipartisan bills aimed to improve campus safety. All of the bills have only been referred to the education committee of either the House or Senate, and some have been there for about a year. None have been moved to a floor vote.

Two proposals, one in the House and another in the Senate since last September, would grant alcohol and drug amnesty for students who report domestic violence or sexual assault. It would require postsecondary schools to have policies to protect the students from discipline for violating other school policies, such as drug and alcohol use.

Other proposals seek to prevent assault by educating middle schoolers and high schoolers about healthy relationships. A bill introduced in March would require postsecondary institutions adopt standards for responding to allegations of sexual violence and expand K-12 health education standards to explicitly address areas of consent and healthy relationships in middle and high school.