Independent board will advise officials on child abuse prevention, enforcement 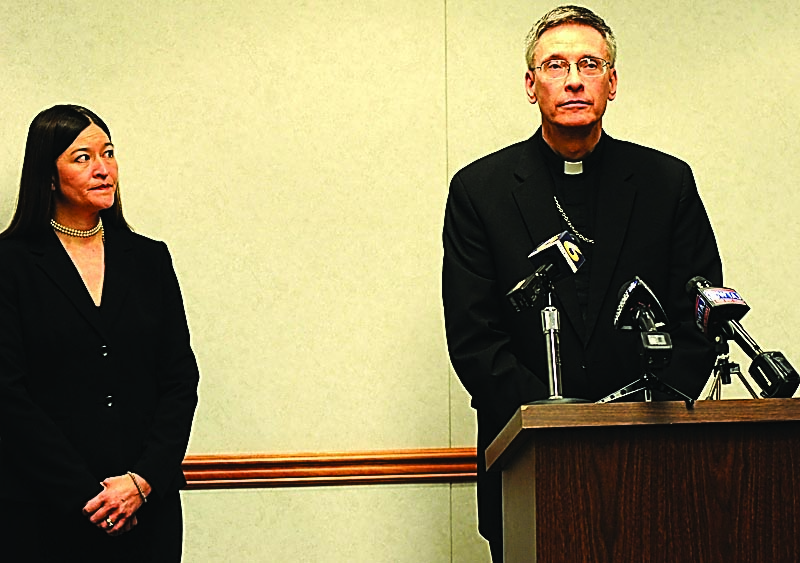 The Catholic Diocese of Altoona-Johnstown and the U.S. Attorney’s Office revealed a series of broad reforms Monday, aimed at preventing child sex abuse and responding swiftly to future allegations.

Under the agreement, the diocese will establish a five-member Independent Oversight Board for Youth Protection, slated to advise officials on child abuse prevention and enforcement. The diocese is also set to establish new rules for contacting law enforcement and publishing accused clergymen’s names, to reform its allegation review board and to hire a consultant and a new official to handle abuse, according to the document.

“One year ago I made a public pledge to victim-survivors. … Today I reaffirm that pledge,” Bartchak said.

Song stressed that the memorandum doesn’t constitute a court order; Bartchak was a “willing partner” in the process, she said.

While there is no legal mechanism to hold the diocese to its reforms, Song said federal officials would meet with diocese representatives if changes are made.

Bartchak expressed doubt that the new rules would be weakened in the foreseeable future.

“God help a bishop who comes later and tries to undo that,” he said.

The newly established oversight board is set to consist of five members from several jobs and disciplines outside the church. It will include a public servant with decades of experience, a licensed social worker, a retired law enforcement officer, a former U.S. attorney and a “courageous survivor” of sexual abuse, Bartchak said.

Song and Bartchak didn’t name the members yet, but they indicated names would be released soon.

Under the agreement, the board is set to exist for 10 years, with members able to vote it out of existence after June 2022 if they feel it has accomplished its goals. The independent board will supervise new rules and policies to prevent abuse, the memorandum states.

“The memorandum of understanding before you represents a clear, definitive break from the past,” Song said. “This agreement puts victims first, it provides for public reporting and transparency.”

The diocese is also set to reform its existing, church-mandated Review Board, which advises the bishop on abuse cases. The board — which the attorney general’s report described as a tool to cover up abuse — will be staffed entirely with new members, Bartchak said.

The board is set to include a social worker, an attorney, a former state police investigator and others, including a Protestant counseling supervisor and a Carpatho-Russian Orthodox clergyman, he said.

Bartchak didn’t indicate whether those who had served on the review board during the past allegations will continue to hold positions in the diocese. Protesters angry at the response to abuse have called on the bishop to remove those who sat on the board from prominent church roles.

Asked whether the diocese would publish financial records, as some others have, Bartchak didn’t provide a definite answer.

The memorandum includes new roles and continuing affiliations with outside groups, including the firm R.L. Nichols & Associates, who will prepare new policies and procedures. The diocese will employ a new director of youth protection, partner with sexual assault crisis centers and provide free mental health care access for victims, according to the memorandum.

The diocese is also set to hire Nulton Diagnostic and Treatment Center, which keeps Altoona and Johnstown offices, to run a 24-hour child abuse hotline.

Under the new rules, the diocese is expected to swiftly respond to abuse allegations: Officials must call law enforcement within 12 hours of a credible claim, immediately remove a suspect from contact with minors and place him or her on leave within a day. Diocese officials will also publicly release suspect’s names, photographs and assignment histories, according to the memorandum.

Bartchak didn’t definitively answer whether the diocese will release full information on all those accused in recent decades.

Other planned changes include mandatory training for clergy members and non-clergy employees, as well as occasional reviews of employees’ computer and internet use.

The changes represent the most sweeping shifts since a series of scandals hit the diocese, which covers eight counties. Song specifically cited the case of Joseph D. Maurizio Jr., a former Somerset County priest convicted of abusing young children during trips to Honduras.

The state attorney general’s report, released in March 2016, detailed decades of abuse and named dozens of priests and church officials involved in cover-ups and political schemes. It followed the 2013 suicide of Stephen Baker, a local friar accused of abusing children at Johnstown’s Bishop McCort High School and other sites.

At the press conference Monday, Bartchak framed the reforms as a good-faith commitment to improve the diocese’s handling of abuse.

“Of course, one incident of sexual abuse is too many,” he said. “And we need to repent of that and make sure it

In a joint memorandum with the U.S. attorney’s office in Johnstown, the Catholic Diocese of Altoona-Johnstown is set to issue broad reforms to prevent and better handle sexual abuse claims. Among the expected changes:

n A new independent board, consisting of five professionals from various fields, to advise the diocese on reforms.

n All-new members on the existing allegation Review Board, which handles abuse claims. The new members include two officials from non-Catholic sects who are experienced in youth issues.

n New rules on swift reporting to police, suspension of suspects and publication of their names and information.

n Work with outside consultants as well as anti-sexual assault groups.