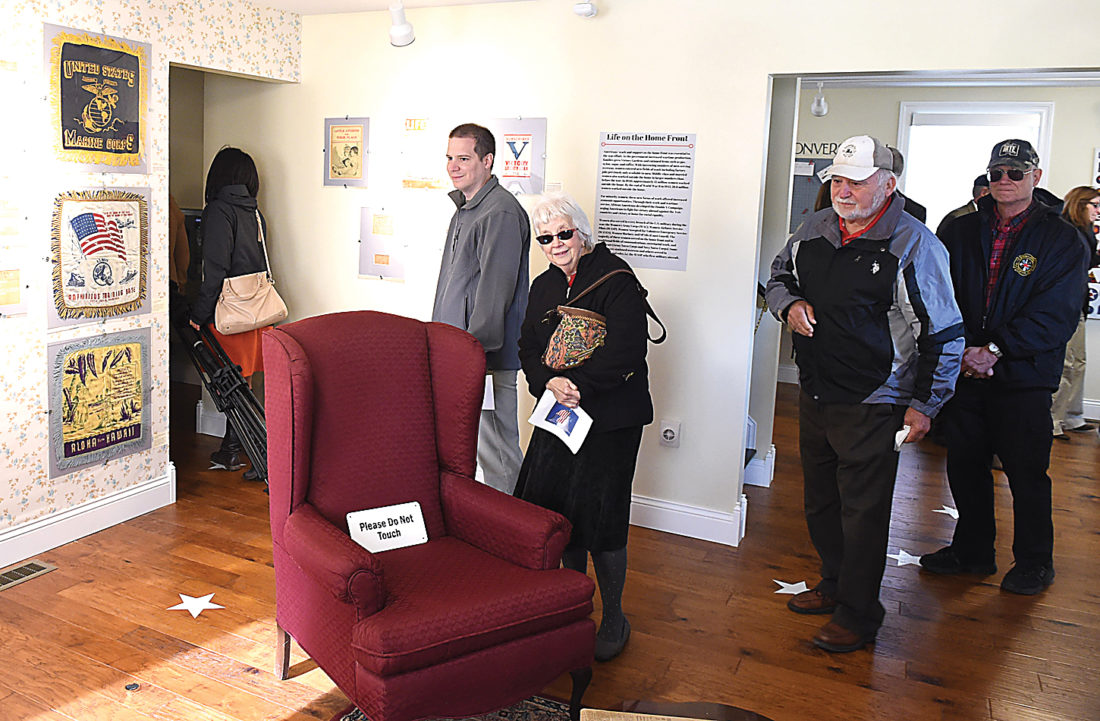 Based on Keirn’s research in the National Archives, the plaque confirmed that Van Tassell’s grandfather participated in the Battle of the Bulge, alleviating doubts Van Tassell might have had about the truth of family stories over the last 70 years.

Keirn’s gift helped validate those stories for Van Tassell, including his grandfather’s memory of spending a night in a fox hole so close to German lines that he could hear enemy soldiers chat with one another, he said after the dedication.

The finding embodied by the plaque is only a footnote to the vast trove of information embodied in Keirn’s donated artifacts — just one-tenth of which are initially on display in the converted house on St. Mary’s Street.

But the plaque’s effect in making Van Tassell’s grandfather’s experience “real” is the same effect that the museum can have on Saint Francis students who have already begun to research there and on visitors from the nearby community and the region, Van Tassell said.

When they come, those visitors can study artifacts like the letter sent from Keirn’s cousin, Bill Dibert, to a relative — when Dibert was in training in Florida.

“Hello Hoarder,” it begins — perhaps fittingly to the relative of a man who would one day amass a collection that took 14 box trucks to transfer.

“How the hell are you and Pete getting along still arguing I suppose?” Dibert continues. “Is he still working as hard as he always does, or is he getting lazy like me?”

The letter is full of irreverence and the self-assurance that comes from youth and belonging to a tight family — and it is a preamble to Dibert’s entry into the machinery of a great war that eventually killed him in April 1945.

Visitors can also see exhibits like the poster-sized enlargement of a photo showing Altoona native and future city police chief Jack Kuhn — one of five Blair Countians among approximately 600 members of the elite World War II Ranger force — standing with a group of soldiers conferring amid hillocks of mud and dirt in Europe. Kuhn is slender, smiling, with a jutting jaw and a carbine held in one hand pointing downward. His hand is clenched, so one can see the outline of one of the bones running from his knuckles to his wrist.

Keirn began collecting at about age 10 after family members — five uncles and three cousins served in the war — returned from the service and gave him items.

The stuff ended up in footlockers in his attic.

He didn’t realize its significance until he was in the Army himself, as a command sergeant major, ordered to take a delegation to the dedication of a museum in Belgium, where there were also former German soldiers.

At first the former enemies were cold to one another, but relations thawed, and eventually the veterans became friends, shaking hands and exchanging gifts.

Keirn himself became friends with a German veteran and visited Europe many times.

Eventually, he took the old memorabilia out of the footlockers and created a museum in his house, moving the artifacts later to what had been his rental property next door to his business, Keystone Radiator.

He cultivated connections with old soldiers in this area, meeting with them regularly, recording their stories — stories that now can be told as part of the museum experience.

State Rep. John H. Eichelberger Jr. eventually helped him solve the problem of what to do with the collection in the long run, when he helped make the connection with Saint Francis.

The beginnings of that connection involved various instances of university officials saying to one another, “you wouldn’t believe” what the man from Altoona was willing to donate, said university provost Wayne Powel, master of ceremonies at the dedication.

“We knew we were being entrusted with artifacts of incredible value,” he said.

At their best, museums like Keirn’s can evoke a dramatic understanding of how “ordinary people (can be) shaped by extraordinary circumstances,” said local historian and Penn State Altoona history instructor Jared Frederick, who attended the dedication in an olive-drab World War II uniform he uses for re-enactments.

“Personal things” generally do the best job of that kind of evocation, Frederick said.

Probably the finest feature of Keirn’s collection is its documentation of the five Blair County Rangers, an astonishing story that testifies to the “fortitude” of a local society that had survived the Depression, Frederick said.

Dr. Sarah Myers, the Saint Francis professor who is the museum’s curator, will rotate the artifacts on display to keep the museum experience fresh, she said.

She will also solicit stories from veterans and their relatives from this area about World War II — and other military matters — to enhance the museum experience, she said.