Counting their losses — 4-H kids deal with effects of virus 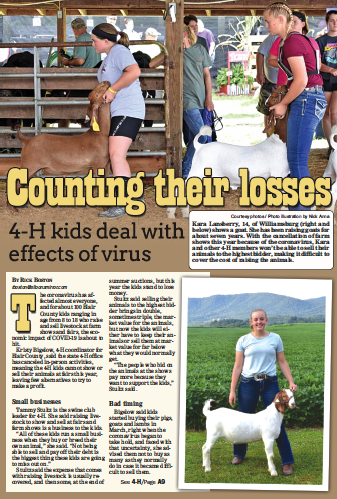 The coronavirus has affected almost everyone, and for about 100 Blair County kids ranging in age from 8 to 18 who raise and sell livestock at farm shows and fairs, the economic impact of COVID-19 is about to hit.

Tammy Stultz is the swine club leader for 4-H. She said raising livestock to show and sell at fairs and farm shows is a business to the kids.

“All of these kids run a small business when they buy or breed their own animal,” she said. “Not being able to sell and pay off their debt is the biggest thing these kids are going to miss out on.”

Stultz said the expense that comes with raising livestock is usually recovered, and then some, at the end of summer auctions, but this year the kids stand to lose money.

“The people who bid on the animals at the shows pay more because they want to support the kids,” Stultz said.

Bigelow said kids started buying their pigs, goats and lambs in March, right when the coronavirus began to take hold, and faced with that uncertainty, she advised them not to buy as many as they normally do in case it became difficult to sell them.

“My suggestion was to cut their initial investment and limit the number of animals they bought,” she said.

Even with cutting back on their numbers, most kids stand to lose money. Stultz said getting market value for an animal will not cover the costs of raising it.

Stultz said that local agriculture businesses are loyal supporters of the 4-H kids’ livestock sale, but the virus has impacted their bottom lines, too.

“The kids cut back on the number of animals they are raising, which means they are not buying as much feed,” she said. “It is having a ripple effect that starts back at the breeders who were not able to sell what they usually do.”

With farm shows and fairs not an option this year, the kids are limited on what to do with their animals.

“They can either take them to the livestock auction and sell them for market value, which is far below their worth, or keep them,” she said. “These kids are not going to make any money, and a lot of them will lose money.”

A way of life

Kara Lansberry, 14, of Williamsburg has been raising and showing goats and lambs at area farm shows and fairs for seven years.

Her father, Joe, said Kara invests a lot of time and money into raising her livestock with an eye toward showing and selling them to the highest bidder.

“Not having the sale, the kids are going to lose a lot of money,” he said. “You want a big crowd. The more people bidding, the higher the price goes.”

Lansberry said Kara normally raises four goats and three lambs for farm show season, but this year she cut back to only three goats to minimize her losses.

“Because of the virus, it just wouldn’t be profitable to keep the others,” he said.

Lansberry said Kara has decided to sell her animals now to cut back on the cost of feed and other supplies needed to keep them. He said they usually have a good idea what the animals will fetch at auction in August, but with that no longer available, they are going to cut their losses early.

“We have to sell them now,” he said. “We will probably get half of what we would at the farm show though.”

Bigelow said plans are underway to set up an event in Martinsburg so the kids can show their animals and compete for ribbons, but it won’t be open to the public.

“It will give them an opportunity to exhibit their livestock,” she said. “It won’t be a 4-H show, and we are asking spectators not to come.”

Stultz said that although the kids will not be able to show their animals to the general public, it will be a morale boost to them to still be able to show.

“The pride of the kids standing in the ring showing is an important part of the experience for them,” she said. “These kids live for show season.”

It remains to be seen how many kids will take part in the private showing. Bigelow said some of the kids have already moved on for this year.

“When we thought there wasn’t going to be a show, a lot of kids sold their animals,” she said.

Lansberry said his daughter is among those not showing this year, a decision they made early on.

“When they canceled the sale part of it, my daughter decided not to show because she is going to lose money on her animals,” he said.