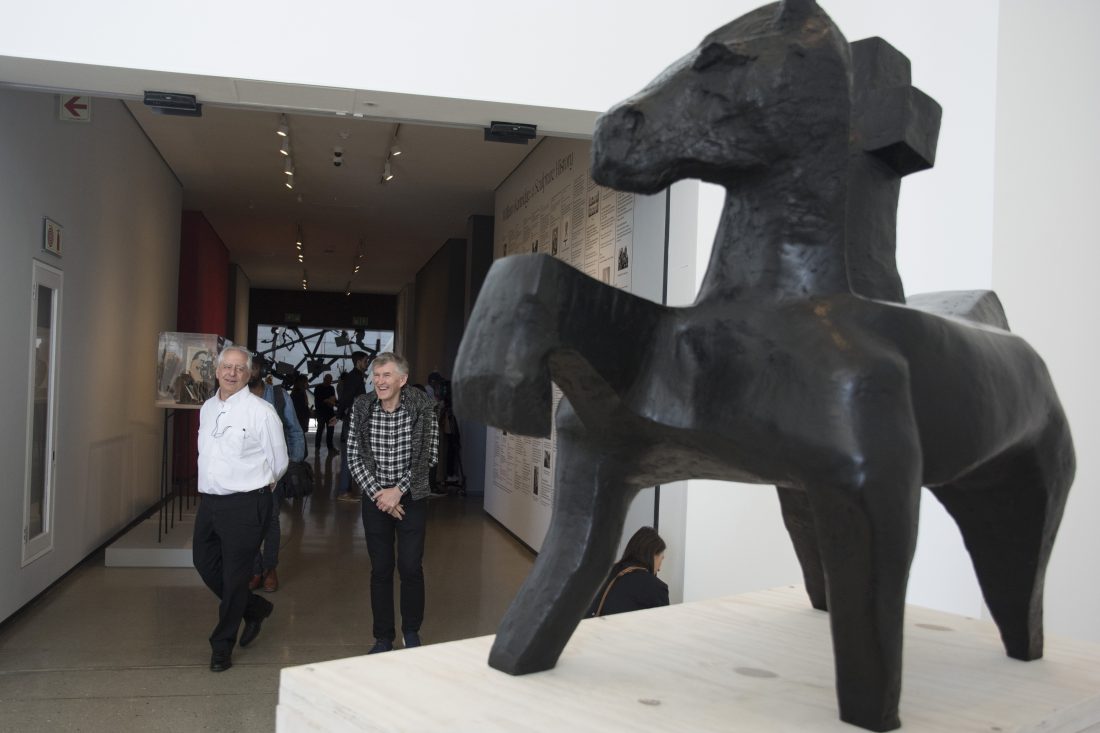 The Associated Press South African artist William Kentridge (left) at the opening of his exhibition in Cape Town, South Africa Aug. 23. Kentridge’s work of evocative videos, graphic tapestries, charcoal drawings, woodcut prints, sculptures and immersive sound installations combine in his largest single show in which he explores compelling themes including the country’s apartheid history and the participation of Africans in World War I.

Surveying the work of Kentridge’s prolific 43-year career in many mediums, the show brims over at two locations, The Zeitz Museum of Contemporary African Art at Cape Town’s waterfront and the Norval Foundation in the Steenburg vineyards nearby.

“Why Should I Hesitate: Four Decades of Art Making 1975-2019,” opened Sunday and is running through March, draws its title from the words of an African conscripted to fight in the First World War, who was faced with a difficult choice: risk death in the war or refuse to serve and face persecution by the colonial regime.

Kentridge, the son of anti-apartheid lawyer Sydney Kentridge, who represented Nelson Mandela, told The Associated Press that social and political commentary have inspired his work.

“I think this comes from living in South Africa, where even if you think you are doing personal work, divorced from politics, you suddenly find that the outside world has come into the studio and shapes and infects and reflects the work, said Kentridge. “So without thinking of myself as a political artist there is a lot of politics that comes into my work.”

The show starts with Kentridge’s early charcoal drawings from the 1970s and moves to his etchings, large graphics and videos, evoking the tensions of South Africa’s violent struggle against apartheid, the system of racial discrimination that ended in 1994.

Wide-screen video and sound installations take the viewer through dream-like journeys in history and provoke questions about the present and the future.

Kentridge said that working to mount such an expansive show of his work, including 50% of his video installations and 60% of his sculptures, made him think about the historic sweep of changes in South Africa.

The exhibit fills up several floors of the Museum of Contemporary African Art. The dizzying amount of work is interspersed with rooms designed for reflection, such as a library where people can sit and look at elements of inspiration, a workshop showing how Kentridge’s prints are produced and the tapestry room which has seating to contemplate the fabrics mounted on the walls. There is also an area for children.

Kentridge’s sculptures, from the small to the monumental, are displayed at the Norval Foundation gallery set among Cape Town’s vineyards in Steenburg.

“I call it anti-sculpture,” said Kentridge of the work. “It is not like traditional sculpture where it looks the same as you walk around it. My sculptures occupy space, but there is only one spot where it all pulls together. From other angles you see all the different parts in a kind of exploded or chaotic way. It shows how we construct coherence from what is a chaotic reality around us.”

Kentridge became internationally prominent with shows at the Museum of Modern Art in New York and the Louvre in Paris. He has also designed productions for operas at the Metropolitan Opera in New York, La Scala in Milan and the English National Opera in London. “The Head & the Load,” described as a processional opera about the paradoxical participation of Africans in World War I, was produced in London and New York in 2018.

“Kentridge’s position is solid, unshakeable because his work is accessible and honest. He is one of the pillars of contemporary art in Africa,” said Azu Nwagbogu, a curator of the show. “Really this exhibition holds up a mirror to events going on today and focuses on events that have gone on before now … He illustrates the complexities and paradoxes of the relationship between Africa and Europe. His work will always have relevance. And this exhibit shows the breadth of his talent.”