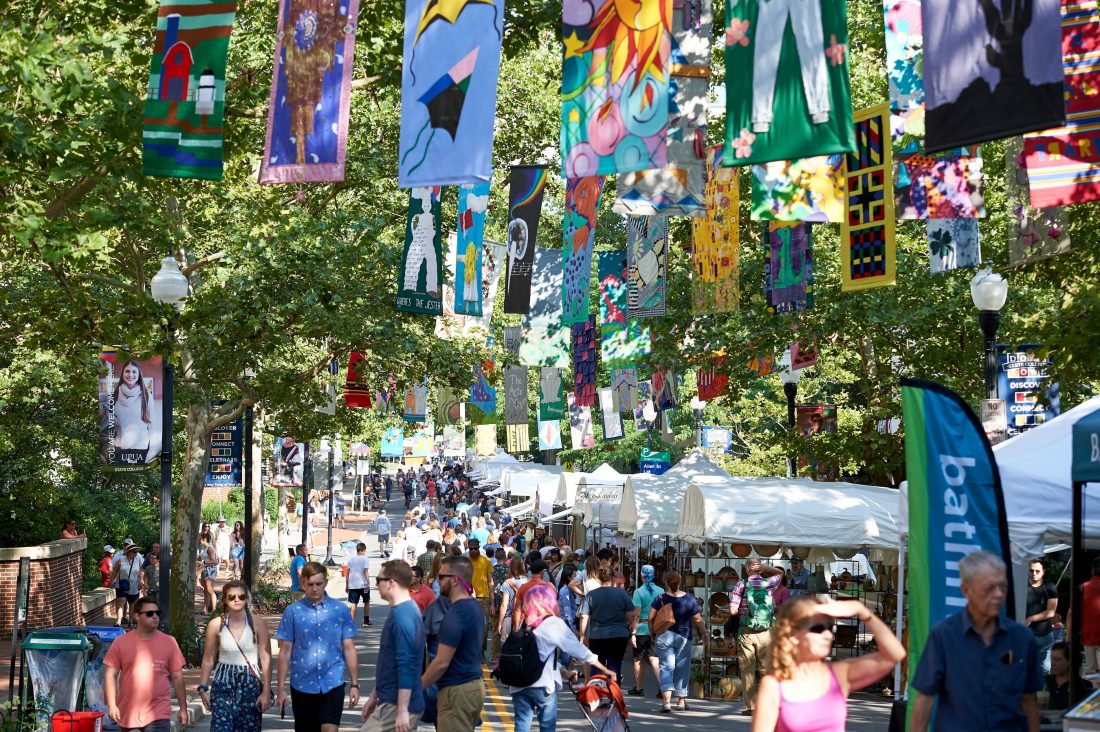 Courtesy photo The Central Pennsylvania Festival of the Arts will be held July 10 to 14 in downtown State College. Photos from a previous year show, above, booths and banners at the sidewalk sale.

State College is transformed in mid-July. Artists and performers from 38 states converge on the town and the landscape is transformed for five days. Beautiful pieces of art are displayed, music and laughter are heard throughout the town as the Central Pennsylvania Festival of the Arts takes hold of the area.

The festival has become a staple in our region. Held rain or shine, the outdoor and indoor events will return for the 53rd year from July 10 through July 14. The festival will bring with it new and returning, notable and creative artists and entertainers. There will also be some changes this year because of ongoing construction in State College.

“There’s lots of construction, so we had to move some events. Street painting used to be on Hiester and will be moved to right in the middle of Allen Street and Foster Avenue. Before some people didn’t walk down there, now they’ll be able to see the artists who paint on the streets,” said Rick Bryant, executive director of the Central Pennsylvania Festival of the Arts.

Bryant mentioned there also will be some new food vendors this year. There will be 318 artists at the annual Sidewalk Sale. Among those is Chris Locke from Texas, who has been to the festival in the past. He uses old horns to create and sell amplifiers for cell phones.

“Each one has its own look, its own personality and its own sound. I make every piece with care, and if I listen, I feel like the horn itself helps guide me to the shape it wants to be,” Locke said.

Locke has been creating these pieces since 2011. He acquires the pieces from yard sales, flea markets, auctions and private transactions. He said he makes them with the desire to bring old and new together, the simple and complex, the handmade and mass produced. “I like these contrasts,” he said.

Hailed artists come from all over the country and our region to display their works. John Hovenstine of J. Hovenstine Studios in Hollidaysburg will display his creative, funny and sometimes off the wall prints of his illustrations and photographs.

“I have eight grandkids and often think of them and what they think would be funny,” he said.

Some of Hovenstine’s work has received attention with national companies. This will be his third time at the festival. His favorite part of being there is his encounters with the people who visit his booth.

“People come in and interact and laugh; it’s a really fun environment. Meeting people is the best part of it all,” said Hovenstine.

Like Hovenstine, Tim Vitullo of the Tim Vitullo Band, has been part of the festival in recent years. A graduate of Pennsylvania State University, his influences are jazz, jam band, country and blues. His band will perform this year on the Festival Shell Stage on Friday, July 12, from 6:30 to 8 p.m.

“I was fortunate enough to perform regularly in the downtown bar scene while I was a student. Everyone I was fortunate enough to play with always viewed Arts Fest as a major opportunity. You had arrived — if you will — if you could get booked for the festival. Unfortunately, none of those bands made the cut. Even as a touring act, Arts Fest is still one of the most high-profile festivals at which we have had to opportunity to perform. It gives me a great sense of accomplishment to be on the bill again this year as a result,” he said.

Vitullo, who has shared the stage with greats like B.B. King, is thankful for the opportunity to return to the home of his alma mater. He embraces the creativity that is infused in the festival.

“Arts Fest is the ideal scenario for a songwriter and performer, too. The event is a giant celebration of the wealth of beauty and creativity Pennsylvania has to offer. As a result, crowds are open minded about experiencing new art, regardless of the medium. We’re ecstatic to have another opportunity to catch the ears of so many people in our home state that are in tune with the arts,” said Vitullo.

Many people flock to State College to embrace the arts and this festival. Bryant said the event draws about 130,000 visitors to the area and infuses $13 million into the local economy. This community who consistently supports the festival is a highlight for artists.

“The crowd at CPFA is always amazing. A lot of them are repeat clients or just people who enjoy coming back to see me, even if they aren’t buying. Arts Fest was the first show I ever did, so it always feels like home,” Locke said.

What: Central Pennsylvania Festival of the Arts

When: July 10-14. Children and Youth Day on Wednesday; performers and artists from Thursday through Sunday

Admission: Free for outdoor events. Indoor performances require a button that can be purchased for $10; children under 12 do not need a button if they are accompanied by an adult with a button