A different perspective in black and white: Huge prints on display at Juniata College 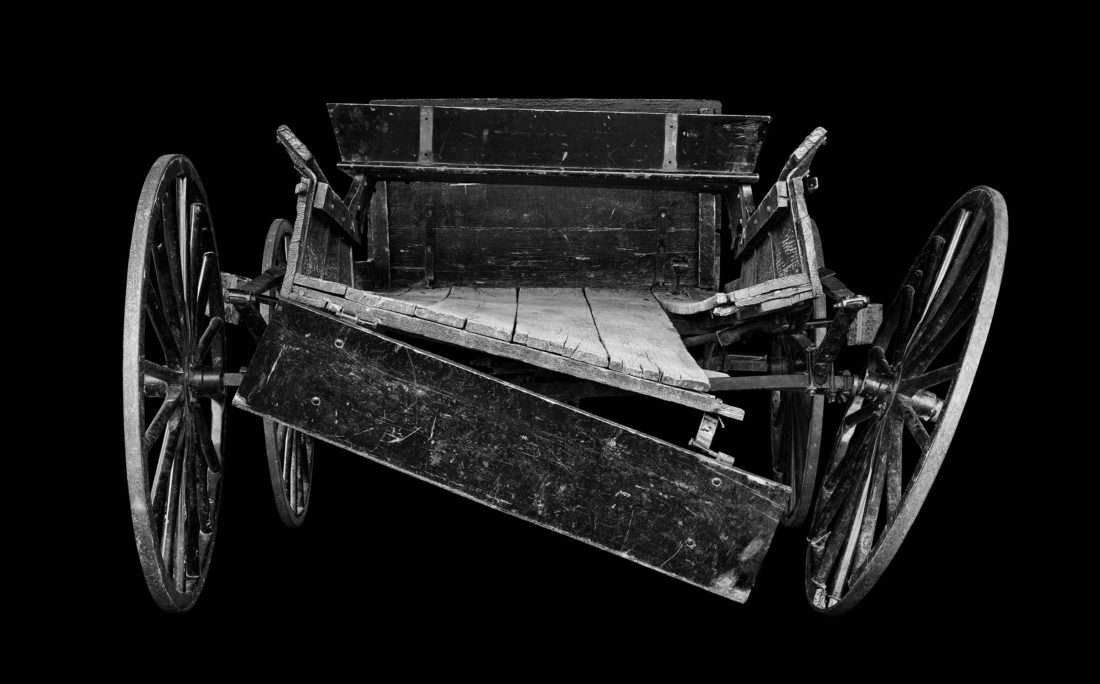 Photos courtesy of Juniata College “Broken Wagon” is a 5-by-8 feet life-sized depiction of a broken Amish wagon floating in a black void. A Pennsylvania Dutch phrase is carved by the artist into the back of the wagon.

Stephen Althouse grew up on a farm in Bucks County. But his family lived in Mexico for a time, and he did an exchange program in Argentina, prompting him to go to college for a degree that would enable him to work for the Diplomatic Corps and live abroad.

During his junior year at Rollins College in Florida, Althouse took an art class to satisfy graduation requirements. It changed his life.

He changed his major to art and went on to become an artist, sculpting pieces influenced by his farm days, photographing them and making large-scale prints, all while teaching college in Miami for 30 years and traveling the world.

Althouse returned to Pennsylvania in 2007, and today his work is on display at Juniata College Museum of Art in Huntingdon.

“Transfigurations: Large-Scale Photo-graphic Works” runs through April 7 and features eight large-scale, black-and-white photographs of objects he created, some draped with white fabric, in high resolution against a black background.

“Althouse’s photography takes ordinary objects such as shovels, tools and wheels out of their context and transforms them into images that invite contemplation,” Kathryn Blake, director of the JCMA, said in a press release. The pieces “allow us to focus on the details of very simple and humble objects and give them a metaphorical quality by presenting them as art instead of everyday objects.”

Due to the large scale of the photographs, viewers are more likely to notice the small details in each object, and “think of each aesthetically instead of just considering how it was useful,” says Blake.

Many of the objects contain words from languages unfamiliar to most Americans, including Braille, Latin, Pennsylvania Dutch and unusual dialects of Spanish.

“Sometimes artists, myself included, feel the need to put words into the artwork,” Althouse said. “The written word is extremely powerful. … You have to make sure that word or phrase is absolutely perfect for that piece. You’re taking a giant, giant chance.”

If he used English, he said, most viewers would just focus on the words alone. By not using English, it gives his art “a high degree of mystery.”

Althouse uses language that relates to his own life. He is of Pennsylvania Dutch descent; he lived for a time in Catalonia, Spain, and Oaxaca, Mexico; and he currently lives in an Amish community in Centre County near Rebersburg.

One piece in the Juniata exhibition called “Wheel I” was done in 2008 while Althouse was mourning an Amish bishop who had befriended him and had died suddenly while chopping down a tree. The pigment print, which is 5-by-7 feet, integrates phrases from a 16th-century hymnal that were read at Elam Beiler’s funeral that “question which way to turn.”

Why does he use Braille?

“It’s not that overt,” he said. “All my work is metaphoric. I hope people look at it, and they like it or they don’t, but hopefully they’re not trying to figure out what I’m trying to say.”

What are you trying to say? he is asked.

“All my work is portraying humanity across time in a very metaphoric way, the contradictions and paradoxes I see as I go through life,” he said. “I think people are essentially very, very good. But humanity does some horrific things. War.

“These are questions I have about us and humankind. We do such good, but yet we can be so bad to other people.”

Althouse said art didn’t interest him as a child, although his parents occasionally took him to the Museum of Art in Philadelphia, which he enjoyed.

In high school, he was more interested in shop, and he liked to build things. So by the time art grabbed his attention in college, he leaned toward sculpture.

In addition to Rollins in Winter Park, Althouse’s undergraduate studies included Temple University’s Tyler School of Art and the University of Miami in Florida, where he earned a bachelor’s degree in sculpture. He then received a master’s degree in fine arts from Virginia Commonwealth University.

He returned to Miami where he worked as an artist while serving as a distinguished professor at Barry University for 30 years. He was able to satisfy his dream of traveling abroad by regularly teaching courses and lecturing on his art in France, England, Spain, Ecuador and the Galapagos Islands. He was an artist-in-residence at the Museum of Modern and Contemporary Art in Belgium during 2003-04.

Althouse was creating three-dimensional works of wood and forged metal that resembled farming implements. Then he began using found objects as his art. And, like any artist, he was taking pictures of his sculptures, which led to his preoccupation with photography.

His artwork now incorporates both mediums. Rather than looking for subjects to take pictures, Althouse determines in advance what he wants to create and he finds the objects for his sculptures.

Once made, he photographs them, using available light and long exposures, usually between four and eight minutes. He develops the film by hand, digitizes the negatives so he can enhance the image on his computer and then prints the photographs on large scale — up to 9 feet long — to rival the size of sculptures.

He does it in his studio near Rebersburg, where he moved the family in 2007 so his children could enjoy a bucolic childhood.

Althouse has enjoyed 11 solo museum exhibitions in the 10 years since, and his work is represented in more than 50 museums in North and South America and Europe. Additional solo exhibitions of his work are scheduled for this year at the Museum Moderner Kunst Karten in Austria and at the Mobile (Alabama) Museum of Art.

When: Through April 7, 2 to 8 p.m. Monday and Thursday; 10 a.m. to 4 p.m. Tuesday, Wednesday and Friday; noon to 4 p.m. Saturday. Check website for closures at holidays and class breaks