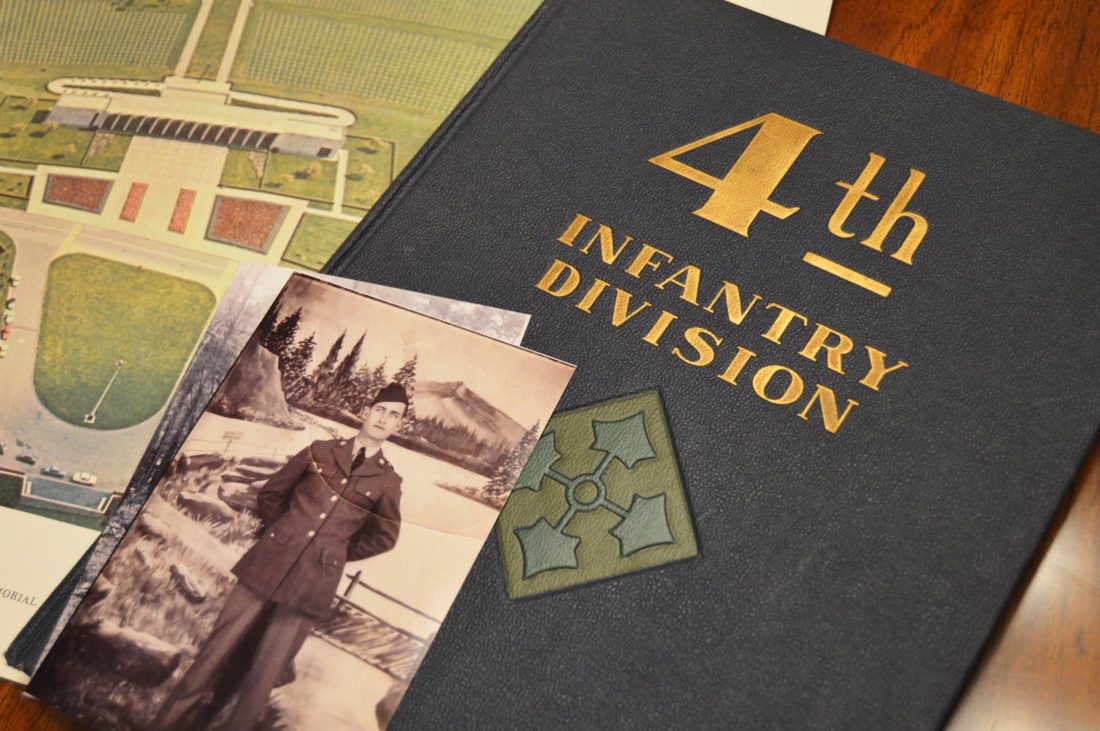 Courtesy photo Staff Sgt. King E. Bailey, shown in the photo, was a member of the Fourth Infantry. He was killed fighting Nazis in a German forest in November 73 years ago. Hans and Marloes Jaket, a couple living in The Netherlands, had “adopted” the grave of Bailey, and wanted more information on the man buried in an American cemetery in Belgium. They contacted Penn State Altoona history professor Jared Frederick who found the information the couple requested, and found out that Bailey was born in Altoona and lived in Claysburg.

A World War II living history group based in Altoona not only reenacts battles of the Fourth Infantry Division of the U.S. Army, it often assists people in geneology research.

“People reach out to us as they’re trying to find out what their dad, their grandfather or uncle did in the outfit in the 1940s,” said founding member and Penn State Altoona history instructor Jared Frederick. “But on this latest one, we hit the gold mine.”

Frederick’s group, The Furious Fourth, received a Facebook message last month from a couple living in The Netherlands who had “adopted” the grave of Staff Sgt. King E. Bailey, a member of the Fourth Infantry who had been killed fighting Nazis in a German forest on that date 73 years earlier. They wanted more information on the man buried in an American cemetery in Belgium, and with a little research, Frederick found it.

“I nearly fell out of my chair when I discovered that he was from my hometown,” he said. “He was born in Altoona and grew up in Claysburg.”

When he relayed that to Marloes Jaket, who, along with her husband Hans, takes care of the grave, “she was surprised and incredibly moved,” Frederick said.

Frederick then was able to track down members of Bailey’s family, including a nephew who never knew his uncle but was named after him and today lives in the village of King in northern Bedford County.

“I’m very excited and very, very appreciative,” the nephew, King E. Bailey, said. “There are people over there that still respect our GIs.”

“And they reached out to us,” added his wife, Bonnie.

Frederick then met with the family and exchanged photos and information.

“All the stars lined up for this to happen,” Bailey said.

Now 70, Bailey said he was made aware at an early age how important his namesake was, and he was always quick to correct anyone who might tease him about his given name.

He knew that his uncle, who worked at the brick plant in Claysburg after graduating from Greenfield Township High School in 1935, was popular because folks bragged on his baseball skills. The man also may have been engaged to a local woman before shipping off to war, but the nephew never got details.

Bailey inherited a box of photos and newspaper clippings from his father, Lemon, who also served in the Army and was in Italy when his brother was killed in Germany. While he had seen a black-and-white photo of the Belgium gravesite from a brother who was in the Army in the 1970s, the nephew hadn’t seen a recent photo or one in color until he met with Frederick.

“It’s surreal to see your name on a headstone,” he said.

Not only is he grateful, so is the couple who takes extra care of the grave in the Henri-Chapelle American Cemetery in Belgium, where nearly 8,000 other Americans are laid to rest.

In an email to the Mirror, Marloes wrote that she and her husband were glad to send photos, as well as receive more information on the American soldier.

“It’s all so much more alive when you know more about the background of the killed soldier,” she wrote. “And hearing how he passed, combined with the knowledge already in our possession — it makes you realize we should always be thankful. The men had to endure so much. Cold, hunger, fear, eventually giving their young lives in the fight, so that we may live in peace now. Such a tragedy for their families.”

Frederick’s research showed that King E. Bailey enlisted in the Army on March 3, 1942, at New Cumberland, an Army base near Harrisburg that once was a major military induction center.

The soldier trained at Fort Meade, Maryland, as well as at Fort Gordon in Georgia, and he sent at least two pictures to his family from that camp near Augusta, including one in which he was eating watermelon with a buddy. He went overseas in December 1943 and served in England until he went to France as part of the Allied Invasion of Normandy on the following June 6, D-Day.

About two weeks after that, on June 22, Bailey was wounded in France, which was about the time the Fourth Infantry “was really bogged down” partly because of centuries-old hedges grown by the Normans 1,000 years earlier, said Frederick.

“Allied planners had not foreseen these to be a problem,” he said. “Aerial photos showed a bunch of hedges, and they figured, ‘We’ll just drive the tanks right through them.’ That turned out not to be the case. Some were 20 feet tall and pretty dense.”

German soldiers had set up machine guns behind them and waited for the Americans.

“According to a lot of accounts, certain units were only moving 50 yards a day because of these hedgerows and the way the Germans were using them to entrap American soldiers,” Frederick said. “That likely was the kind of environment that Bailey was in when he was wounded on June 22.”

The Allies were pushing to capture Cherbourg, France, because they needed a deepwater port to bring in supplies from England so they could push across Europe, he said.

“The Fourth Infantry was among several divisions going about that task and one of the first big assaults on the city took place on June 22,” the day Bailey was wounded, Frederick said. “It’s possible he could have been engaged in battle capturing that city. He was a staff sergeant, and he may have been in charge of a squad, perhaps a dozen soldiers or so.”

After he was wounded — the details of which the Army nor Bailey told his parents — the soldier was sent to a hospital in England until Sept. 1 when he returned to duty on the continent, according to Mirror clippings that Frederick dug up.

“He could have come home, but he went back for seconds and didn’t make it,” the nephew said.

The Allies were trying to cross Belgium and penetrate Germany by that Christmas, and a lot of soldiers still had their summer uniforms that November of 1944, as supplies couldn’t keep up with their movements, Frederick said.

Much like they were slowed by the hedgerows of Normandy, soldiers hit a dense forest along the border of Belgium and Germany.

“The primary group that became ensnared in that fiasco was the Fourth Division and also the 28th Division, which a lot of Pennsylvania guys also were in,” Frederick said. “Some of those outfits had 150 percent, 200 percent casualties because the first string of men were being mowed down, and the subsequent replacements were being killed or wounded as well.”

The Hurtgen Forest near Duren, Germany, became known as a “death factory,” he said. The Germans had placed “very elaborate rings” of barbed-wire fencing, as well as an elaborate system of bunkers and trenches in the area. They also would shoot artillery into the trees, he said.

On the day that Bailey was killed, his Eighth Regiment was following and supporting tanks trying to push through those barriers.

“In all likelihood, that’s probably the setting in which he lost his life,” Frederick said. “And he certainly wasn’t alone.”

His remains were placed in a temporary and then permanent grave at Henri-Chapelle American Cemetery near a village with the same name in Belgium.

At the end of the war, families had three options for their lost family members, according to Frederick: leave them buried overseas, return them to a national cemetery, such as Arlington or Gettysburg, or return them to their hometown for burial.

Bailey is one of nearly 8,000 Americans interred at Henri-Chapelle, which is one of more than two dozen national cemeteries abroad and the eternal home to a number of Americans killed in the more famous Battle of the Bulge.

“A lot of families thought their loved ones should be alongside the people they died with,” Frederick said.

Those American cemeteries abroad are overseen by the American Battle Monuments Commission, and many of them get extra attention, which the Bailey family recently discovered.

The Netherlands couple lives in Nunspeet and usually vacations about 2 1/2 hours away in Valkenburg, which is less than 10 minutes from the Netherlands American Cemetery in Margraten. When Hans and Marloes found out several years ago that another American cemetery — Henri-Chapelle — was was just across the Belgium border, they decided to visit it, too, and now they visit both every year.

“Hans and I visit a lot of museums together, read books on WWII and visit cemeteries in order to honour the soldiers who lost their lives for our freedom,” Marloes wrote in her email.

When they learned of adopting a grave, they signed up, and earlier this year they were assigned a name: King E. Bailey.

“We couldn’t choose our soldier, but this wasn’t that important to us,” she wrote “Most important for us was being able to ‘connect with’ and provide care for one of these men, as though (we were) caring for all these men (and women).”

It became more poignant when Marloes realized that her own brother, a police officer, was killed in a motorcycle crash in 1996 on the same day 52 years after Bailey was killed in action.

She wrote that her husband’s interest in WWII history also was due to his grandfather, a member of the Dutch resistance to the Nazi occupation, being shot and killed by the Sicherheitsdienst, or SD, the intelligence agency for the Third Reich.

The couple began researching their soldier and because they are involved in re-enactments, too, they successfully reached out to Frederick’s Furious Fourth living history group in Altoona.

“We were at Sgt. Bailey’s grave on Nov. 18, where we lay flowers and lit a candle at his cross,” she said. “It felt very special to stand there, at that moment, because we were there on that day for him specifically.”

Frederick said a number of Europeans remain “profoundly appreciative” to America for the sacrifice made during WWII.

“I saw this firsthand when I visited Normandy a few years ago,” he said. “In some communities in France, they actually fly the American flag above the French flag as a gesture of appreciation.”

Wrote Marloes: “We honor our ‘King’ and have been proud to do it.”