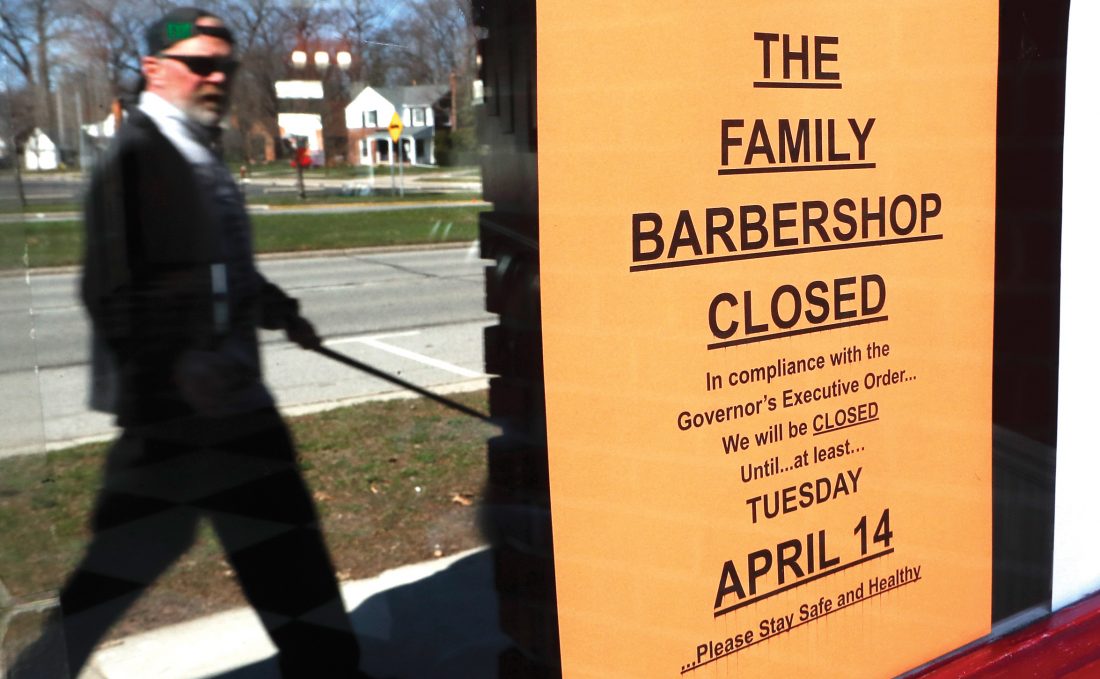 The Associated Press / A pedestrian walks by The Family Barbershop, closed due to a Gov. Gretchen Whitmer executive order, in Grosse Pointe Woods, Mich., on Thursday.

WASHINGTON — A grim snapshot of the U.S. job market’s sudden collapse emerged Friday with a report that employers shed hundreds of thousands of jobs last month because of the viral outbreak that’s brought the economy to a near-standstill.

The loss of 701,000 jobs, reported by the Labor Department, ended nearly a decade of uninterrupted job growth, the longest such streak on record. The unemployment rate surged in March from a 50-year low of 3.5% to 4.4% — the sharpest one-month jump in the jobless rate since 1975.

And that’s just a hint of what’s to come.

For the April jobs report that will be released in early May, economists expect as many as a record 20 million losses and an unemployment rate of about 15%, which would be the highest since the 1930s.

The enormous magnitude of the job cuts is inflicting far-reaching damage on economies in the United States and abroad, which are widely believed to be sinking into severe recessions. As rising numbers of people lose jobs — or fear they will — consumer spending is shrinking. That pullback in spending, which is the primary driver of the economy, is intensifying pressure on those businesses that are still operating.

Economists are holding out hope that an extraordinary series of rescue actions from Congress and the Federal Reserve will help stabilize the U.S. economy in the months ahead. The key goals of Congress’ just-enacted $2.2 trillion relief package are to quickly put cash in people’s hands and incentivize companies to avoid job cuts or quickly recall laid-off employees.

The package includes an extra $600 a week in unemployment benefits on top of the usual state payments and will ideally enable the millions of newly jobless to pay their rent and other bills. But it won’t make up for the vast array of spending that Americans typically engage in that has now been lost — from eating out and paying for gym memberships to buying new furniture, autos and electronic gadgets. Indeed, Oxford Economics says that for the April-June quarter, that pullback will likely cause the sharpest quarterly drop in consumer spending on record.

Katharine Abraham, an economist at the University of Maryland, said that if the extra aid manages to help many of the unemployed avoid building up excessive debt, “when businesses open back up … they should be able to spend money.”

Still, even factoring in the government’s intervention, Joel Prakken, chief U.S. economist at IHS Markit, predicts that the economy will sharply contract in the April-June quarter — by a 26.5% annual rate, the worst on records dating to just after World War II.

Many economists say that additional government support will be needed, particularly if the virus persists into the late summer.

Nearly 10 million Americans applied for unemployment benefits in the final two weeks of March, far exceeding the figure for any corresponding period on record.

“This was an ugly jobs report, showing that the pain in the economy started in early March, well before the spike in the weekly initial jobless claims data,” said Joseph Song, an economist at Bank of America Securities.