Phelan turns back the clock at Saint Francis 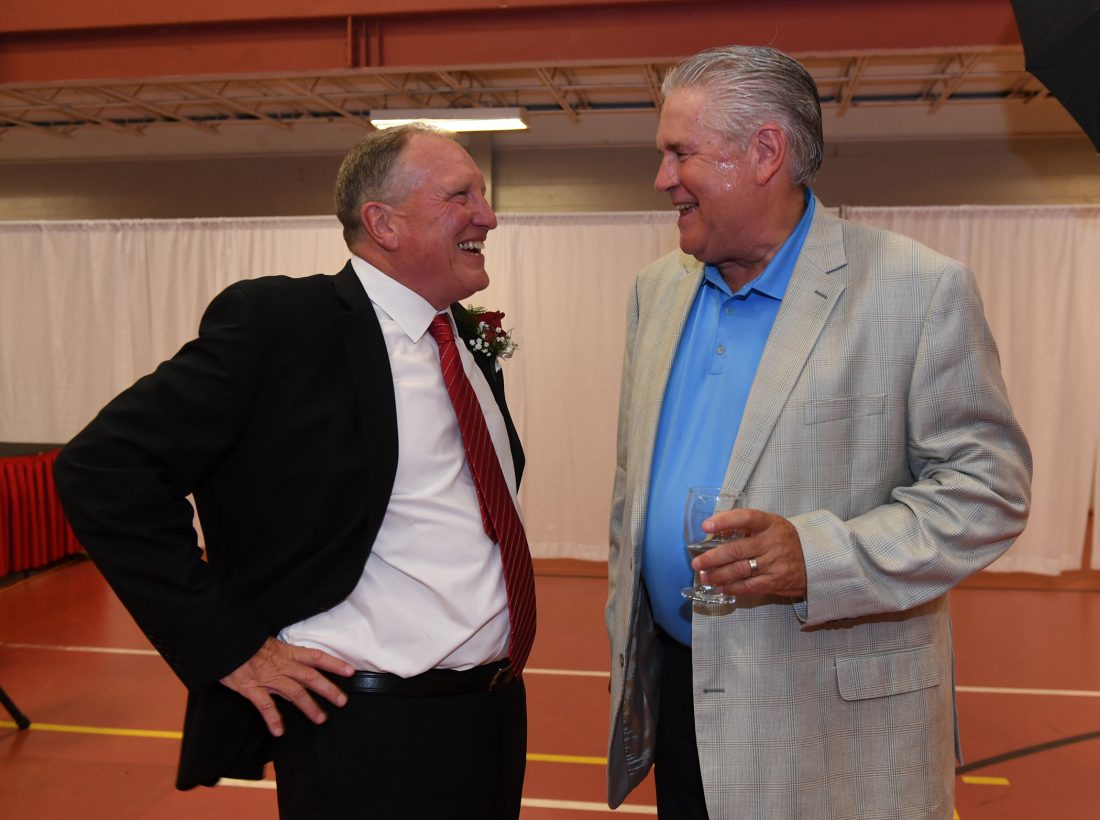 Photo for the Mirror by J.D. Cavrich Jack Phelan (left) and Dave Magarity share some stories before dinner Friday night at Saint Francis.

LORETTO — You could not be in the Maurice Stokes Center on Friday night for the 2019 Saint Francis Athletic Hall of Fame induction ceremony without feeling the deep sense of pride that permeates the Red Flash community.

While all of the inductees were certainly worthy, one was particularly unique in that he was a centerpiece of an unsung era of Saint Francis basketball that didn’t play in a national tournament, in part due to the lack of a reasonable conference affiliation, but was every bit of a tough out for a half-dozen year stretch.

How tough was Jack Phelan as a player? Tough enough to be invited for a workout with the Pittsburgh Steelers, even though he hadn’t played football since high school.

As a senior, Phelan opened eyes with a 42-point performance, hitting 20 of 25 field goals — DeGol Arena single-game records that still stand — in an 89-85 win over Norm Nixon-led Duquesne.

In addition to the Dukes, Phelan – along with a nucleus including Nick Leasure, Pat McGeary, Kenny Horoho, Pat Sweeney, many of whom were on hand Friday night — helped lead victories over the likes of UNCC, Creighton, Boston College, Iona, West Virginia, Penn State and Georgetown from 1974-78.

When the Flash played Pitt at Fitzgerald Field House during Phelan’s senior year (1977), longtime Saint Francis trainer Ray Kist told him, “There’s a team here to look at you.”

He thought it might be the Detroit Pistons since two years earlier, he was part of a Saint Francis team that beat the University of Detroit — coached by none other than Dick Vitale.

Phelan wanted to play in the NBA and became a sixth-round pick by the Golden State Warriors. He was incredulous when Kist told him the Steelers were interested.

Sure enough, a football workout in Ebensburg was arranged (at the time, Saint Francis had no track for timing runs) and after being released by the Warriors, Phelan was called by Steelers personnel coordinator Dick Haley and wound up in Latrobe at Steeler training camp. He even got in an exhibition game.

Turns out there was another undrafted defensive back the Steelers were understandably intrigued by – Tony Dungy.

Phelan returned to Loretto and became the assistant coach under Dave Magarity, who succeeded Pete Lonergan in 1978.

“Jack was special,” Magarity, now leading the Army women’s program and recently completed his 35th season as a head coach, said. “He was an incredibly talented kid, but he also had an incredible drive and intensity and a great personality.”

The two became close, living in a Sixth Avenue apartment in Altoona, and have remained that way over the past 40-plus years.

When SFU Hall of Fame emcee Bob Moore, the Kansas City Chiefs historian and a Saint Francis alumni who has championed Red Flash history, introduced Phelan on Friday, the former Connecticut native who picked Saint Francis over UConn immediately flooded back to his roots.

He mentioned Lonergan and Magarity and Dick Conover, who recruited him in 1973.

He paid tribute to those who came before him, saying the first college game his parents saw him play was his eruption against Duquesne.

“I was so determined to win that game,” he said.

He thanked upperclassmen such as Clarence Hopson and Rick Hockenos, who, like Magarity and Lonergan, were present at the Hall festivities to show their support.

“Guys like Hopson and Hock and Al Walker, those seniors were such special leaders,” Phelan said. “They weren’t about scoring. They were about winning. I thank them for teaching us about team.”

Not many players who are offered scholarships by UConn – especially not Hartford natives – choose Saint Francis.

Phelan was an exception.

“Something piqued my interest here,” he said. “It was the right place for me.”

It’s tough to top Mike’s choice of Rajai Davis, who has a whopping 415 stolen bases in the majors, yet has ...

There haven’t been many players step into a batter’s box at PNG Field or its previous name of Blair County ...

Don’t be too eager to sit in the stands if your favorite team is lucky enough to open play over the next few ...

Pirates-Curve bond strong, but fans shouldn’t be at workouts

Over the years, I’ve often wondered what everyone around here did during the summer prior to the Curve’s ...