Many area wrestling greats to be inducted into D6 HOF

District 6 will be inducting 13 into this year’s Hall of Fame over the next two weekends, including five from the Mirror’s coverage area.

Philipsburg-Osceola 2000 state champ and longtime Oakland Raider Jon Condo and his father Dick Condo, a 1964 state runner-up for P-O who passed away in 2018, will both be recognized. They were elected last year, but Jon couldn’t attend the ceremony.

A tip of the wrestling headgear goes to Chestnut Ridge for not only placing at the PIAA Duals for the fifth time since 2013, but also keeping its collective head in the game after a tough 39-26 loss to Southern Columbia.

The Lions are coming off of their consecutive third-place finish in Hershey. It was also the third straight year they lost to Southern Columbia in the semifinals.

Some wrestlers in individual tournaments suffer what is called the semifinal slide, losing all of their consolation bouts after falling in the semis. They’re so close to the finals they can’t rebound mentally in the consolations.

There might have been some concerns about Ridge being unfocused in the consolation semifinal against Burrell, but it rolled to a 44-10 win. Later, the Lions beat Saucon Valley, 36-31, for third place.

Ridge coach Josh Deputy says his wrestlers “live” for this time of year.

Ridge will be a heavy favorite to win its ninth straight District 5 Tournament on Saturday at UPJ’s Sports Center.

It’s a shame that area fans will have to choose between watching the finals of the District 6 Class 2A or District 5 Tournament and second-ranked Penn State’s dual meet against third-ranked Ohio State at 7:30 p.m. Saturday night at the Bryce Jordan Center.

The District 6 finals, as well as the other medal matches, will start around 5:30 p.m. at the AAHS Fieldhouse. The District 5 medal round at UPJ is set for around 5. Both tournaments could be ending around the time Penn State starts. The match will be aired by the Big Ten Network.

Fans at the Fieldhouse and UPJ might look for a TV to watch the dual meet, which will feature PSU’s second-ranked Nick Lee wrestling Ohio State’s top-ranked Luke Pletcher.

Congratulations to UPJ coach Pat Pecora on becoming the all-time wins leader at every level of wrestling.

Pecora, who has coached many wrestlers from the Mirror’s coverage area over his 44 years at UPJ, earned his 617thcareer win with a 22-12 victory over Mercyhurst on Friday night.

He passed Oregon State’s Dale Thomas, who held the record for 46 years.

Todd Irwin can be reached at tirwin@altoonamirror.com. He can be followed on Twitter at @ToddIrwin1. 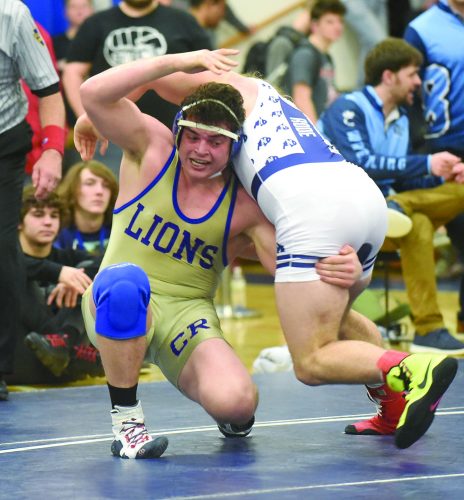