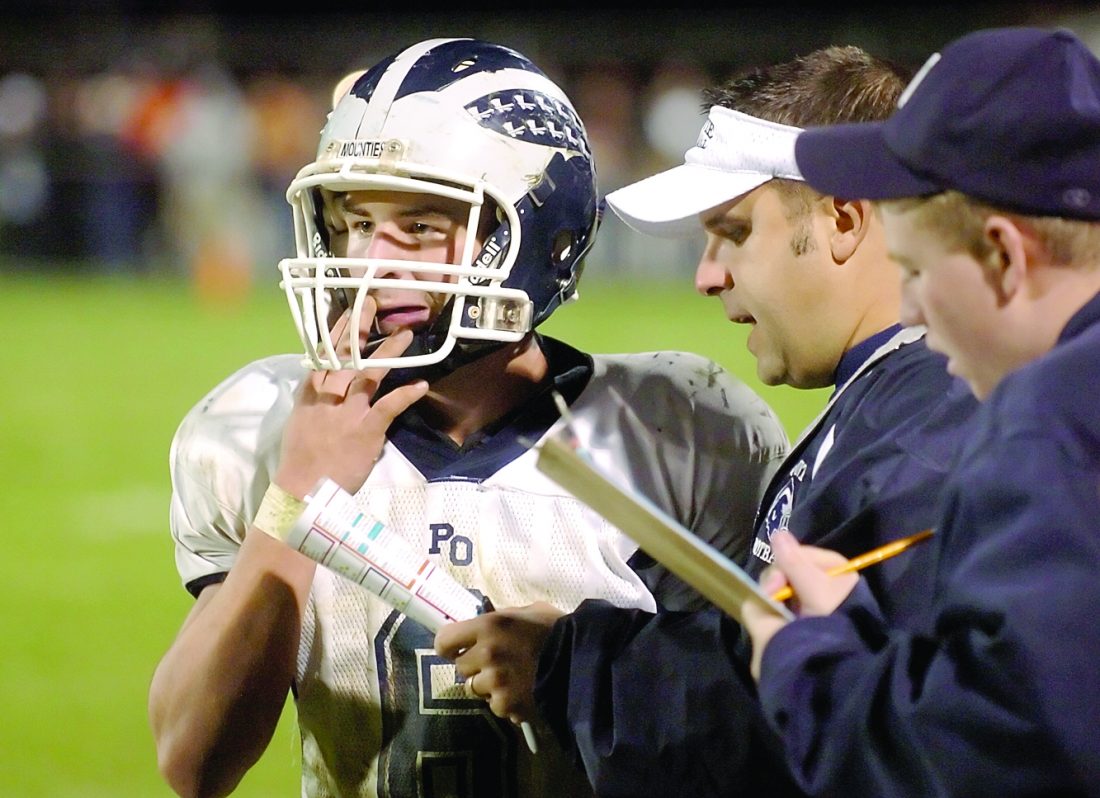 Mirror file photo Jeff Vroman is seen here on the sideline as P-O’s head coach during his first stint with the Mounties’ program.

Philipsburg-Osceola saw its high school football season end prematurely last year due to injuries that forced the school to forfeit its final two games of the regular season.

Not long after that, Brian McMonigal, who had coached the Mounties the past two seasons, resigned due to personal family issues.

That was enough to lure back a familiar name.

Jeff Vroman, who coached Philipsburg-Osceola for 12 years until 2013, was hired after a unanimous vote by the school board as the new head football coach earlier this year.

“From a program standpoint, I wanted to come back, just because of how bad it is,” Vroman said. “You can’t finish a season? I just couldn’t take it anymore. I’m a teacher there, and you see how it impacts the student body and how it impacts players. I just felt it was time to come back and get this thing where it was.”

Vroman had served as an assistant coach at Hollidaysburg the past two seasons.

“It’s always great to have someone with such great knowledge of the game of football, someone who has been a head coach, on your staff,” Hollidaysburg football coach Homer DeLattre said. “It’s invaluable, and he did a great job while he was here. He kept our special teams in line. We had great special teams because of his influence on them.”

Vroman said in addition to fixing the Mounties’ program, he was also attracted to the job because his family. His daughters go to school in Philipsburg, and his oldest is a drum major. He said he’s never had the chance to see her lead the band.

“I think a lot of people are excited for his return,” DeLattre said. “I think, in time, he’s going to get it turned around and have some success.”

When Philipsburg-Osceola forfeited its final two games of the season last year, its opponents Clearfield and Penns Valley were frustrated because the Mounties had enough players to field a team, but many of those players were undersized freshmen that P-O didn’t feel were ready for varsity action.

“They had the ninth graders up playing at the varsity level, and I don’t think that was beneficial to anybody,” Vroman said. “They were playing up, but when it came time, it was said you couldn’t use them because they were too small. That’s why they should have been down (in junior high) where they could at least be playing football instead of going through a practice and not being able to play in any game.”

The Mounties have gone just 4-56 since Vroman left in 2013, but he had the offseason program off to a good start before school was shut down due to concerns over the coronavirus.

“We were into a weight program the week after I was hired, and the kids were very responsive to that,” Vroman said. “The attendance and work ethic were all there. Everything was coming together, and they knew the expectations I had as far as organization and working hard, but you also want to get to know the kids. That was starting to happen, but of course with the health situation everything came to a screeching halt with the kids.”

Vroman and his staff have continued to work on developing the team even without being able to form face-to-face relationships with his players.

“We have sent out some workout ideas as far as strength and conditioning to the kids,” Vroman said. “They can work on that at home, but it’s definitely tough.”

Since Vroman’s exit nearly a decade ago, Philipsburg-Osceola has built a new stadium that opened in 2017, and the weight room has been upgraded. Vroman said when he last coached the Mounties, he didn’t even have a practice field that was 53 yards wide.

“A lot of schools don’t have the facilities that we do,” Vroman said. “That was another thing that prompted me to come back. When the school district puts millions of dollars into a new facility, and you can’t finish your season, there are issues. I just saw that and knew it wasn’t right. There was never a time in 12 years where our program was on the verge of not existing, and that was a real problem for me.

“With as much time and effort as my staff and I had put into this, the blood, sweat and tears, to watch it all just wash away over a few years was real tough.”