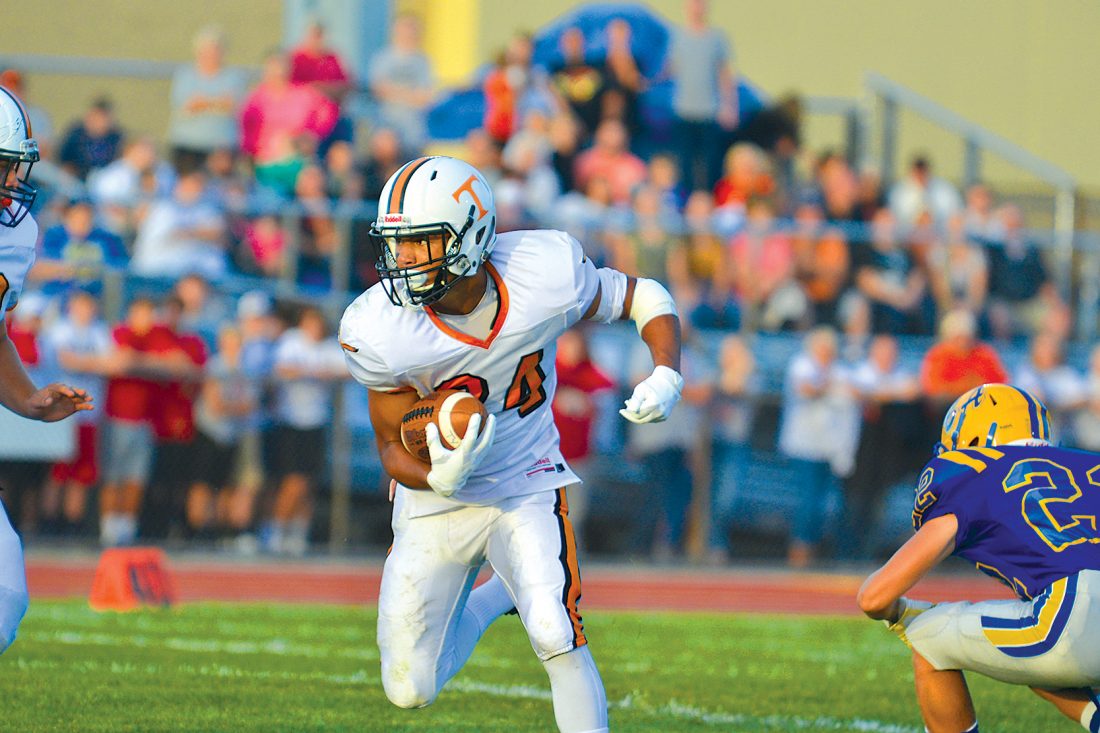 Mirror file photo Tommy Hicks, who was expected to be a key player for Tyrone, missed a majority of the 2019 football season with an injury.

The Golden Eagles rebounded to win the next two, but even as they did, significant injuries began to mount. Eventually it all caught up to Tyrone, and the Golden Eagles lost their final six games to finish just 2-8.

It was the second straight year injuries plagued Tyrone. The Golden Eagles ended up just 4-6 in 2018 and missed the playoffs when they lost their last six games after a promising start that included victories over Bellwood-Antis and Central.

“I have been studying it my whole career, but really, what it comes down to, is that most injuries are freakish events that normally don’t happen,” Franco said. “Tommy Hicks is the perfect example. He’s punting, a guy comes in on him from behind, and there’s not much you can do for that. Our conditioning program is second to none even though we haven’t had a lot of time this offseason to implement it.”

Hicks was meant to be Tyrone’s top ball-handler last season, whether it be as a dual-threat quarterback or getting carries out of the backfield, but after a solid game against Bellwood, he was lost for the season early in the Golden Eagles’ second game.

“It was tough, because I couldn’t help my team out,” Hicks said. “I tried to help them learn, but it was very difficult. I’m going into this year amped up.”

Hicks is hoping all the injuries from last year turn out to benefit Tyrone this season.

“We’ll probably be one of the top teams, because last year our underclassmen got an opportunity to work,” Hicks said. “Coming back this year, everyone seems to be faster, stronger and knows what they are doing. It’s not just a few people, it’s the whole team.”

“I think we can come out as a team much better with all our stars being healthy,” Gripp said. “I think our stars are going to play like stars and we’re going to have a good season.

“We’re real motivated right now as a team. We have a lot of numbers showing up for practice right now, and I think we’re going to be a lot stronger team.”

Last season’s quarterback, Brandon Lucas, who threw for more than 1,000 yards and ended up being Tyrone’s leading rusher, will also be back.

Franco said he’s been impressed with his four returning linemen that saw plenty of action last year and hopes they continue to develop and stay injury-free.

“You just hope your luck is a little bit better this time,” Franco said. “You hope that if you stay in good condition, keep your strength level high and stay in shape that Lady Luck will smile on us a little more than she has in the past.”

The veteran coach explained that no matter what level of high school football he’s been coaching during stops at Altoona, Bishop Guilfoyle, Saint Joseph’s and Tyrone, there is usually a drop-off in talent after a certain amount of kids. Keeping those players healthy is often the key to a successful season.

“You usually have about 15 really good players, and when you lose one of those players, you are usually losing two positions,” Franco said. “Usually those kids are playing both ways, and the guy backing them up is very rarely at that level. You usually don’t have the talent level at most schools to compensate for that loss.”

The players are eager to bring success back to the Golden Eagles’ program.

“As a team, we’ve got some business to handle,” Hicks said. “It’s all mental for us. We have to keep pushing. Everyone wants revenge on everyone. We feel we have business to take care of this year.”