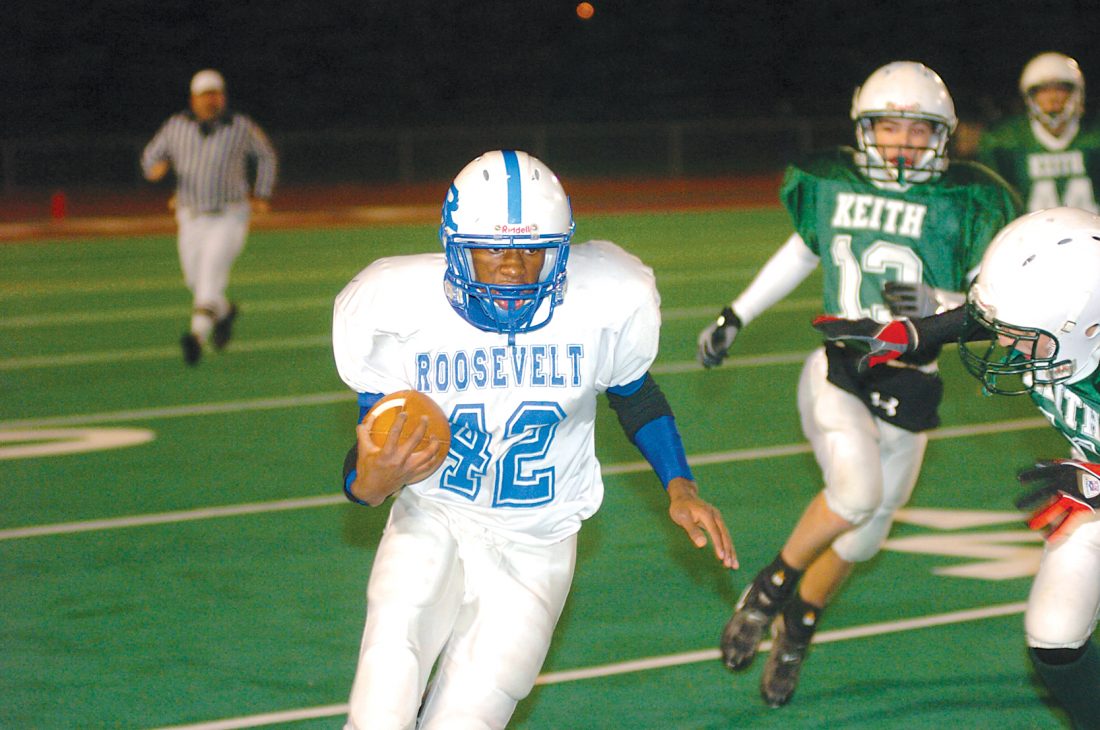 Mirror file photo From Keith vs. Roosevelt to more recently, Altoona vs. Hollidaysburg, ninth grade football was an area tradition.

The two biggest high schools in the area, Altoona and Hollidaysburg, have decided to move up all ninth-grade football players to the varsity and junior varsity level.

The Blair County rivals are the latest to move away from ninth-grade football games, a trend that has been moving through the state of Pennsylvania the last decade.

“We did a lot of research,” Hollidaysburg athletic director and football coach Homer DeLattre said. “The WPIAL is down to like nine ninth-grade teams in the whole league across all classifications. Football is moving in that direction. We have talked to other coaches about it. We had been talking about it for a couple years, because it’s getting harder and harder to find true ninth-grade teams to put on the schedule. Back in November, we decided that we were going forward with two JV teams. We’ll have a traditional JV team and a JV team with ninth graders and two different schedules.”

Altoona football coach Vince Nedimyer Jr. also pointed to the difficulty of finding true tests for his ninth-grade team as a reason to move up players.

“I have seen the full transition of it,” Nedimyer said. “We went from Keith and Roosevelt where we were playing all the surrounding schools. That was something very special to me. It was an awesome time, but then it evolved into the one junior high with Roosevelt being torn down, and we tried to keep two teams, but it just didn’t work out. We brought it to one, and they had a lot of success, but over time you kind of see that they are playing a diluted schedule because some of the better ninth graders of these other teams are being brought up. I think for what we’re doing, I’m confident that this is best for us right now.”

“We will play some stronger small schools like Portage, Penns Manor, Berlin (Brothersvalley) and Windber,” DeLattre said. “It really helps those JV teams too, because they don’t get a lot of games. That’s one benefit I saw right away that was going to help all football around here. Even schools like Bellwood weren’t playing a full junior varsity schedule.”

Teams in the Laurel Highlands Athletic Conference have been required to play ninth graders up to the varsity level for years.

“Five or six years ago, the Laurel Highlands made it mandatory that freshmen play up,” Bishop Guilfoyle Catholic coach Justin Wheeler said. “We did it my first year in 2011. We moved up freshmen as a school choice to make sure we could fill a full JV and varsity team. The Laurel Highlands adopted that a few years later. I think ninth grade, because of numbers, I don’t see it being as common across the state.”

The trend concerns many area coaches, including some veteran minds in the Mountain League — which still uses ninth graders in junior high games.

“I just don’t feel every ninth grader is ready to be moved up,” Clearfield coach Tim Janocko said. “I don’t think that’s a good situation, and I think you end up losing kids. It’s important to keep ninth grade separate and move up the kids that need moved up. Those ninth graders get lost when they get moved up, and there’s a lot of kids that are too small and don’t have a lot of confidence, and they get lost in the shuffle.”

For what it’s worth, Wheeler agrees with Janocko that not every player can handle the move, and the Marauders have taken precautions to help with the transition.

“In order for it to work, you have to be an organized program,” Wheeler said. “Even at practice, there are freshmen that can’t physically go with seniors and juniors. We divide our kids with colors of practice jersey. So, in the heat of practice in the heat of the moment, we don’t accidently match up a younger kid with one of our better kids. We plan times in the practice for those kids to practice on their own, and we try to never have live or semi-live play with younger kids going against older kids. It’s something we have gotten pretty good at, and it helps keep our ninth graders safe.”

Altoona and State College both have moved away from ninth graders playing junior high despite the Mid-Penn still allowing it as a league.

“Ultimately, I think it’s going to help our program in terms of the competitiveness both in practice and on game days,” Nedimyer said. “Right now, in the Mid-Penn, it’s not terrible. But we see on a week-in and week-out basis that teams are bringing up what we assume are their best ninth graders. We’ve had so much success at the ninth-grade level here at Altoona. Damon Luciano and his staff and guys in years past have done a great job with that team, but in talking to those coaches, the trend is definitely going toward ninth grade being pulled up.”

A year ago, Central and Philipsburg-Osceola bucked the Mountain League trend and pulled up their ninth graders to the junior varsity and varsity level. It worked out well for the Scarlet Dragons, but not the Mounties.

“Our decision was based upon that last year’s junior and senior classes were small,” Central coach Dave Baker said. “We had about 10 sophomores, but four or five were going to play varsity as starters. If we were going to have a JV team, we had to move up our ninth graders, and we moved up most of them. We thought we could have a good junior varsity team with mostly ninth graders, which it worked out that they played 10 games and won eight of them.”

Philipsburg-Osceola was forced to forfeit its last two varsity games despite having healthy ninth graders that could have been enough to field a team.

“They had the ninth graders up playing at the varsity level, and I don’t think that was beneficial to anybody,” said new Philipsburg-Osceola coach Jeff Vroman, who was an assistant coach at Hollidaysburg last season. “They were playing up, but when it came time, it was said you couldn’t use them because they were too small. That’s why they should have been down (in junior high) where they could at least be playing football instead of going through a practice and not being able to play in any game.”

“Jeff (Vroman) and I have spoken about this,” Franco said. “He’s also in favor of keeping the ninth-grade programs. Going around the state and talking to people from our area, I have asked someone to tell me why I’m wrong. Maybe I’m not seeing something, but I have yet to find anyone other than administrators saying they want to make the numbers higher on the varsity level. They aren’t doing that, because you are eliminating kids that aren’t going to come out because they are intimidated. It’s the wrong way to go.”

Franco, who won a state championship at Tyrone in 1999, said he prefers ninth-grade football to junior varsity.

“The JV program in high school football is not important,” Franco said. “The junior high program is vitally important. What happens is if you ask ninth graders to come up and practice varsity, there are a lot of them that just aren’t ready. When you don’t get them and lose them there, you rarely get them back. On the other hand, when you have just a ninth-grade team, you’ll have kids coming out that may not have come out in seventh or eighth grade and you get them to come back in 10th, 11th and 12th grade. In the long run, you have higher numbers.”

Franco said new PIAA regulations on junior varsity games that allow for more of a practice-like atmosphere separates the two levels even more.

“People say they need to keep the JV programs going,” Franco said. “Honestly, most coaches can tell you, the JV programs do nothing for you. They are glorified practices, and in fact, if you look at the new rules being put in for JV games this year, they are going to let you treat it pretty much like a practice. You can eliminate a kicking game and limit the number of plays. I have said for years, we should treat it like colleges and have a Monday scrimmage where you make it for the guys who didn’t play much in varsity and make it a special day for them.”

Baker will be going back to having a traditional ninth-grade team at Central this season, but as the Scarlet Dragons enter the LHAC next year, the choice will no longer be his.

“The most important thing is to have as many kids play in games as you possibly can,” Baker said. “If you need ninth graders to play on the JV team, you move them up. You want to try and have a ninth-grade team, if possible. This year, we will have one. Now, when we move to the Laurel Highlands, ninth graders must play on the junior varsity team, so that will be taken care of. There’s no question about that happening.”

Just don’t expect it happening at Tyrone under Franco’s watch.

“It’s not a good situation to have kids that are not yet developed practicing against varsity,” Franco said. “I can’t tell you enough how against it I am. What I get from athletic directors in favor of bringing the ninth graders up is that they need numbers for the JV games. What are you talking about? Eliminate them. Cancel them if you want and just have a scrimmage. They aren’t important. The ninth grade is important. Ninth grade is when kids form their identity that they bring with them to high school.”