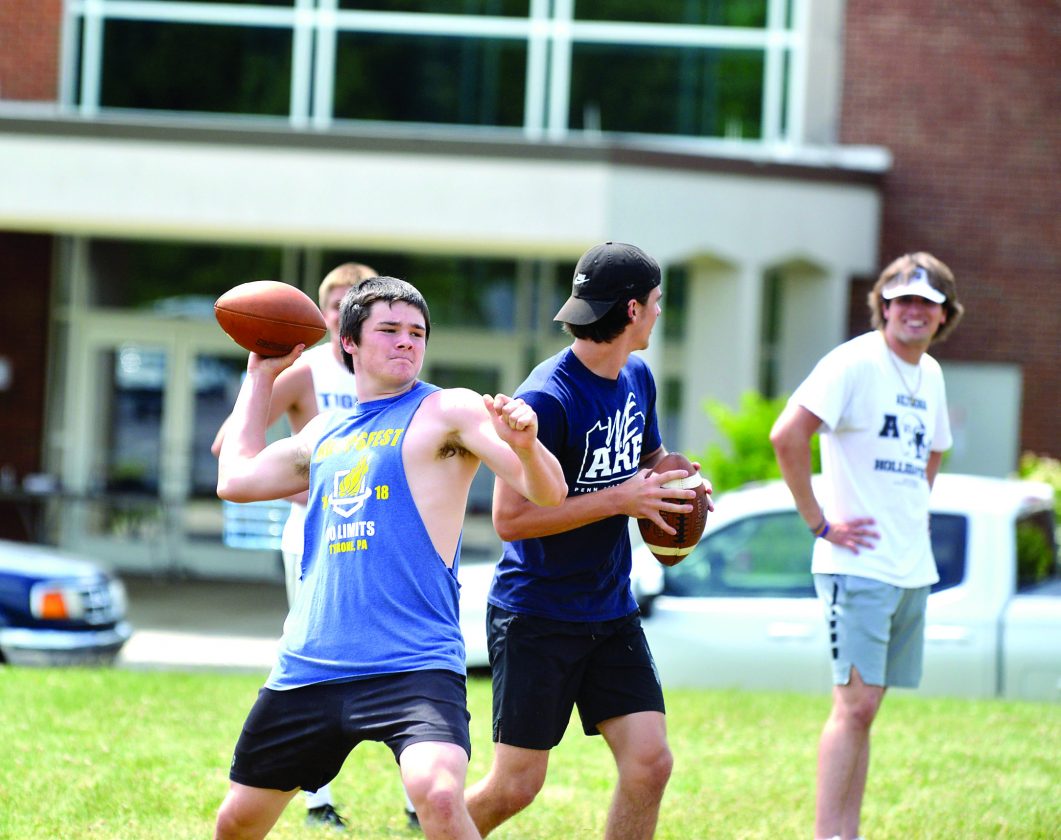 Several schools across the area have started up football activities ahead of the 2020 season this week after the door was opened for a return to play by Gov. Tom Wolf and the PIAA last Wednesday.

“We tried to get in front of it and tell the schools that something was coming,” PIAA Executive Director Dr. Robert Lombardi said. “Get together and get something put together. Some people heeded the advice and some didn’t. Those that didn’t, shame on them. We sent that out to every school, athletic director and principal. They should have been on point to work on that. At the least, they could have looked at the National Federation of State High Schools or UPMC guidelines, cut and pasted a shell, and started the conversation as quickly as Monday morning before the announcement.”

One of the first schools to get their plan approved was Hollidaysburg, which began its workouts Monday morning at 9 a.m.

“(Hollidaysburg athletic trainer) Amy Smearman and I started a networking group with 120 athletic trainers across the state and worked with the Sports Advisory Committee and the PIAA. They let us know we were going to have to have a plan in place before we could start,” Hollidaysburg athletic director and football coach Homer DeLattre said. “Amy and I were one of the first to finish a detailed plan, and we pushed that out to the athletic trainers. We lucked out and finalized ours the Wednesday that the PIAA put out the guidelines last week, and we got it to our school board that evening. We happened to have an Athletic Committee and a (HASD) School Board meeting that night, and we were probably the first school to pass our guidelines.”

DeLattre’s detailed plan, available on the school’s website, was mirrored by many other schools and drew praise from Lombardi and Monday’s PIAA meeting.

“People are sharing their return to play so to speak, and many schools have been sharing their plans,” Lombardi said. “Two popular ones are ones developed by Homer DeLattre at Hollidaysburg and Jason Zimmerman from Northwestern Lehigh. A lot of people have been using the NFHS guidelines and putting them in formats that fit their needs.”

DeLattre has been doing his best to keep up with helping others get their plans together.

“Other schools have reached out to us, so many that I have lost count,” DeLattre said. “The first day, I think I had 36 emails and text messages from ADs looking for guidance on a plan. It’s great to be able to help others.”

“We had parents and players sign off on a waiver, and we’re monitoring these kids,” Altoona football coach Vince Nedimyer Jr. said. “If we don’t have that paperwork, we don’t allow the kid to participate. Fortunately, they have done a good job the first two days of getting that stuff back to us, and we haven’t had many hiccups. We’re wiping things down after every use, spraying the footballs and it’s just something you have to get used to. Our kids have been receptive to it.”

“It was like Christmas morning,” Wheeler said. “It’s such a great feeling to get up and know you can see the kids. Just to see them was great and for us to get potentially a step closer to the season was awesome.”

Central Cambria began workouts Wednesday after its board approved a plan on Monday.

“It’s going to look a lot like, schedule-wise, what we normally do,” Red Devils football coach Shane McGregor said Tuesday. “We offer a morning and then a p.m. session for guys that work and allow guys to come to either one. Usually, we have less than 25 based on our team numbers, at each session individually. There will be different protocols as far as cleaning everything, taking temperatures when guys arrive and all the safety measures that were passed by the school. Our whole staff is on board with it. The kids are on board. Everyone wants to get back and use our weight rooms and run around on our fields again. It’s going to be a good thing.”

With workouts approved several weeks before the original date set by the PIAA of July 1, adjustments had to be made for the layoff.

“The return to play wasn’t generally like it would be when kids have been doing stuff,” DeLattre said. “It’s important to slowly progress them back into getting in shape.”

Smaller groups were a popular trend in sessions.

“The school passed a lot of guidelines, so we’re doing things in small groups,” Wheeler said. “Instead of doing full team stuff, we’re teaching in small groups. We’re not using pads or shields or anything like that. We just broke them into positions and did some conditioning.”

Other area schools, like Central, have yet to return to football activities.

“There is going to be a plan. It is being worked on, and when it is approved by the school board, it will be presented to the coaching staff of each sport,” Central football coach Dave Baker said. “We are waiting on that. To be honest, I am not privy to the information of exactly what will happen. None of the coaches are really part of that process.”

Tyrone is also still on the sidelines, but the Golden Eagles are just waiting for their plan to be approved by the school, something that football coach John Franco would like to see as soon as possible.

“We need to get back in the weight room and have an organized program,” Franco said. “The kids have been working out on their own, and I have been pleased with what I have heard. I have checked in with them through group texts, and we have had some Zoom coaches’ meetings, but we have had some team captains working virtually to lead team workouts. We’re ready to get in the weight room and have clinics, but we need school approval so we can follow the guidelines. Until then, we’re waiting to get to work.”