Toein’ the line: Guys in the trenches key for BG 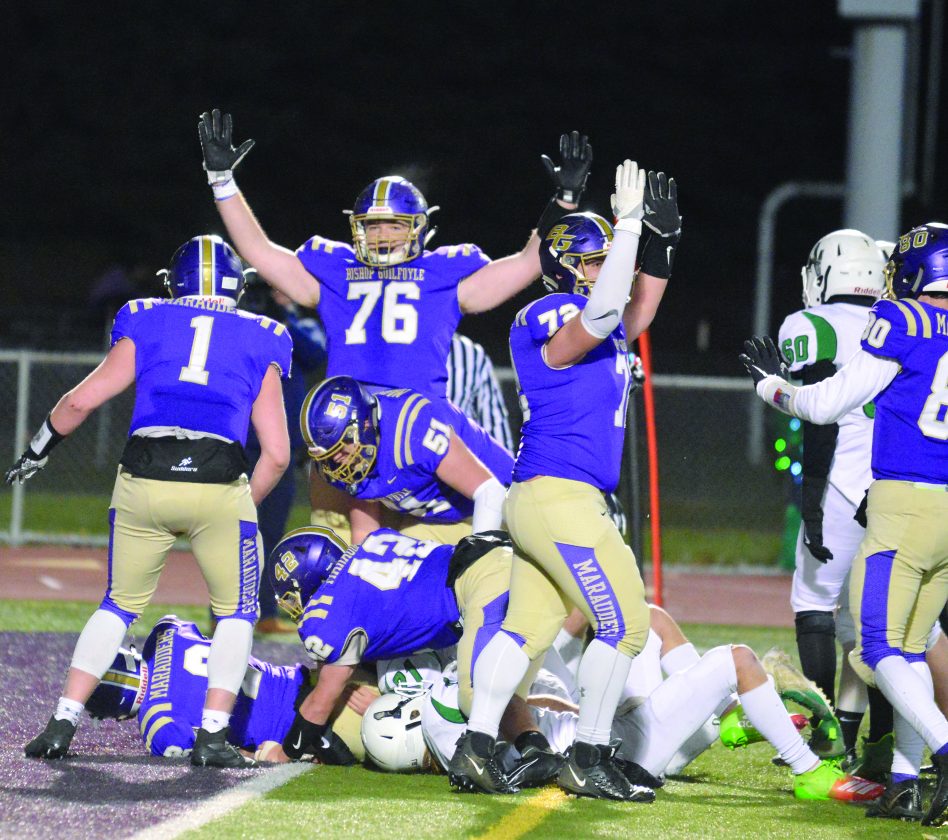 Mirror photo by Patrick Waksmunski Brady Bithell (76) and some of his BG offensive line teammates celebrate a score in the district final.

Keegan Myrick is 5 yards short of 1,700 yards rushing this season, but the junior running back would be the first one to tell you that it takes more than just his efforts to pile up those kind of numbers.

“Usually, I’m not looking until a second later, and (Myrick and Zach McCloskey) are already 20 yards down the field,” Bishop Guilfoyle senior center Jack Donoughe said. “When they do well, it hits us a lot, because we don’t get a lot of notice as linemen, but that’s your hard work and what we have been working for all year.”

The Marauders are a young team overall, but three of the five normal starters on the offensive line are seniors — something BG coach Justin Wheeler knew would be a strength going into the season.

“We knew having (senior) Brady Bithell that he would be our anchor at tackle,” Wheeler said. “He’s been big, physical and has been able to dominate opponents all year. Jack Donoughe is a three-year starter on the line at guard and center, and he’s a team captain and the heart and soul of the team, just a phenomenal kid.

“Our other tackle (senior) Tyler Conigy is a first-year starter, but has really excelled in the back half of the season and comes off the ball well. Inside, we have two sophomores, Anthony Edwards and Colin Butler, who are similar kids both starting for the first time. They have gained knowledge from our seniors. They are quiet but really have improved after leadership from the senior class. They are good players, even as sophomores.”

Donoughe said helping Edwards and Butler along was something he was able to do, because he has had to play multiple positions on the Marauders’ line during his career.

“Last year, I came in as a starting guard, but this year, we didn’t have many starters left, so I had to step up and learn all three roles,” Donoughe said. “So I have played as the center and helped walk the two sophomore guards through it. I’ve helped them learn what to do since I was a guard last year and last year I had to step into a new role after playing center before and take on more responsibility.”

Bithell, a Robert Morris commit, also has encouraged the sophomore pair throughout the season.

“They don’t have a lot of size,” Bithell said. “We have them focusing on using their speed and leverage to drive people, and they have gotten a lot better as the year has gone on.”

The group is deep and has gotten contributions from other players as well. Butler didn’t start against Juniata Valley in the District 6 championship game, but junior Evan Himes filled in admirably.

“The last couple weeks, from Bishop McCort straight through to Lackawanna Trail, we’ve faced good lines that just brought it,” Wheeler said. “We’ve handled it pretty well. I think we’re battle tested and up for the challenge.”

Those tests were all leading up to an extremely challenging final exam Thursday in Hershey when Bishop Guilfoyle takes on Farrell in the PIAA Class 1A championship at 1 p.m.

“Our line has dominated all year,” Farrell coach Anthony Pegues said. “We’re big, strong and athletic. We average 6-foot-2, 290 pounds up front, and we have over 4,000 yards rushing. Our line, both on offense and defense, is the heart and soul of the team with multiple DI talent there.”

Wheeler agreed the Steelers’ line will be the biggest the Marauders have faced but said BG may be able to be the fresher squad.

“They are going to have to be relentless,” Wheeler said. “This will be the biggest and fastest front we’ll see. (Our line) has to give us their best 50 to 60 plays. Four of the five only go one way, so they can give every ounce of energy and motivation they have this week.”

Bithell said it doesn’t take much to give Myrick a shot at a game-breaking play.

“We know he’s talented, and he’s unlike any other back,” Bithell said. “If we give him a crease, we know he’s going to hit it. He’s a special talent.”

For seniors like Bithell, Donoughe and Conigy, Thursday’s trip to the state final means even more after struggles early in their career.

“It’s incredible, especially for this senior class,” Donoughe said. “In eighth grade, we went 0-7-1. It shows you how much you can grow and how we became a brotherhood.”