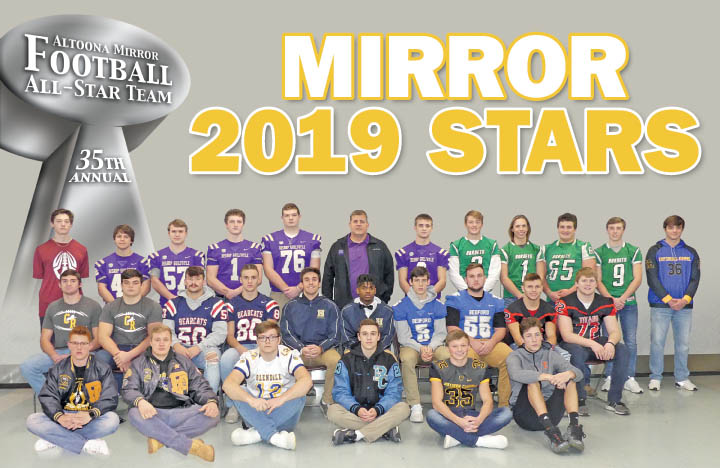 Keegan Myrick wasn’t always available for Bishop Guilfoyle Catholic this past high school football season, but when he was anywhere close to 100 percent, he was often the best player on the field.

The standout junior running back and defensive back led the Marauders to the PIAA Class 1A championship game, rushed for a Mirror-coverage-area high 1,777 yards and scored an area-high 166 points while playing stout defense.

For those efforts, Myrick has been named the Altoona Mirror’s High School Football Player of the Year.

“He is one of the most gifted athletes I have ever coached,” Bishop Guilfoyle coach Justin Wheeler said. “When he was in, he had the potential to make a big play or a home-run play at any time.”

Myrick flashed his potential as a sophomore but was plagued by injuries. He had to deal with injuries again this season, playing in just 13 of Bishop Guilfoyle’s 15 games and being limited in several more, but still left his mark when he was on the field.

Myrick finished the season with six interceptions, including several at key moments.

“Defensively, we thought he’d be one of our best defenders,” Wheeler said. “He started as a sophomore, and he worked on open field tackling. He ended the season leading us in interceptions and tackling on open-field plays. In big games, he made big plays. He caused a fumble against Ridge and matched up against their best receiver. He’s a difference maker.”

That game against Chestnut Ridge, a 20-14 victory in the eighth week of the season, was huge for the Marauders.

“Chestnut Ridge is the game where we turned the corner,” Myrick said. “We really figured out that we are good and we could go far in playoffs.”

Myrick played just one snap of defense in the District 6 championship game against Juniata Valley and had a key interception on the play.

“I just watched film on great teams like the 2015 and 2016 state championship teams,” Myrick said. “I watched my cousin and watched Evan Chadbourn and how they played, and that really helped my game.”

Following Bishop Guilfoyle’s 10-7 overtime loss to Farrell in the state final, it didn’t take Myrick long to start preparing for his senior year.

“He’s on a mission,” Wheeler said. “He’s about as focused as a kid can be on making sure he’s better next year. He’s been working at Dorman Sports on his strength and conditioning. He just worked out an hour and half less than a week after the season getting better. He could have a monster year and be one of the best players in the state next year.”

Myrick said he actually was back in the gym even quicker than Wheeler thought.

“I want to put on muscle weight and get faster,” Myrick said. “Eighteen hours after the game, I was already working out again.”