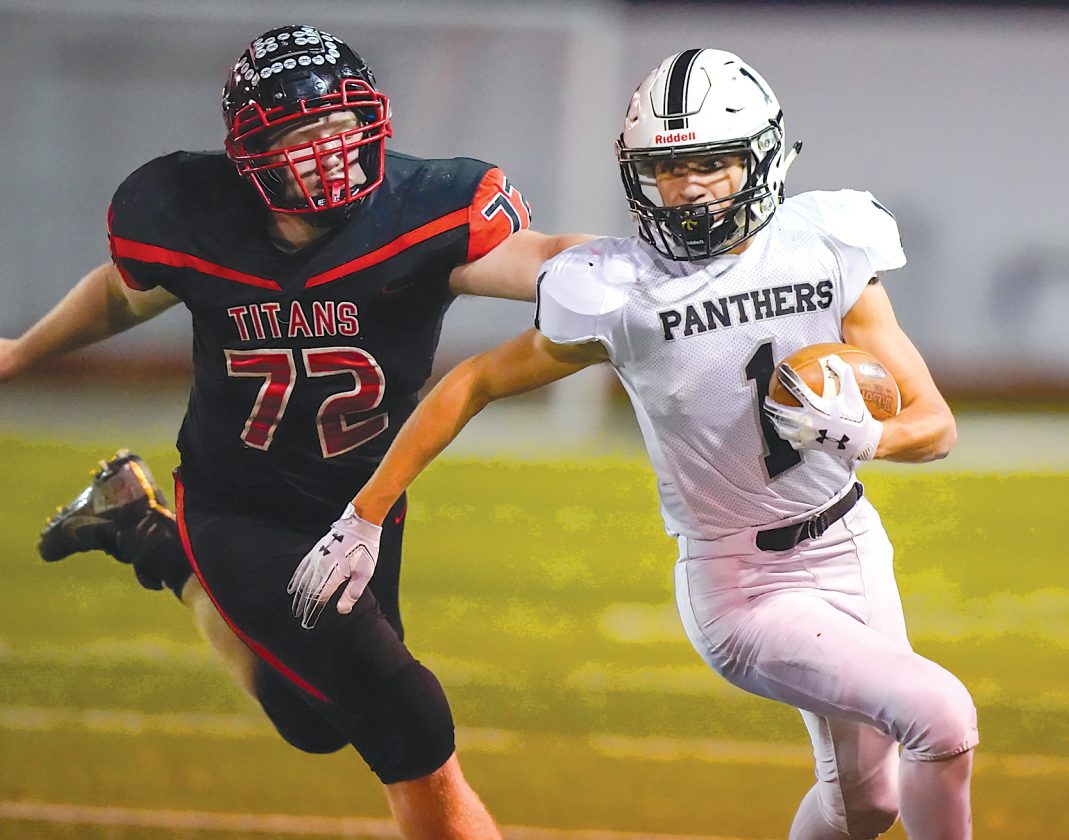 The Titans had won just two games combined in the three seasons before Sottasante’s arrival in Saxton. They went 8-3 last season before claiming their first district title since 2013 by scoring 21-fourth quarter points Friday.

Play of the game: With his team trailing 10-0 and struggling to move the ball with 27 seconds left in the third quarter, Tussey Mountain quarterback Matt Leonard connected with District 5 sprint champion Tyler Rhodes on an 80-yard touchdown pass that shifted momentum to the Titans.

Player of the game: Kaden Lucko had 118 yards and two touchdowns on 24 carries and seemed to get stronger as the game progressed.

Unsung hero: Chad Morningstar had a pair of sacks, tipped several passes, was disruptive in Northern Bedford’s backfield the entire game and made all four of his extra point kicks.

Most vital statistic: Lucko had runs of 11, 16 and 11 yards on three consecutive attempts midway through the fourth quarter on a drive that ended with a 2-yard score from the junior back.

Great call: With 14 seconds left in the first quarter, Northern Bedford coach Garry Black recognized a fake-punt formation Tussey Mountain lined up in and screamed out where the play was going to his team, which stopped Rhodes short of the first down marker.

The game was over when: With 5:04 left, Northern Bedford pulled within five on a Brady Clark halfback pass to Colby Imler. Rather than kick off deep, Black called for an onsides kick. The ball bounced up directly to Dawson Kling, who raced 48 yards for a touchdown to put the Titans back up two scores.

Kling: “I saw the ball bouncing, and it took a nice bounce. I saw a hole, grabbed it and boy I never ran so fast. I was scared to death. They weren’t catching these wheels, baby.”

Leonard: “Our fans really got into it after (the 80-yard touchdown pass). Our fans boosted our momentum and got us into it.”

Tussey Mountain coach Anthony Sottasante: “We knew this was going to be a dog fight, and we knew either team could win, but we pulled it out. It’s a credit to our kids.”

Northern Bedford coach Garry Black: “The number of times we’ve hit the onsides kick in practice and recovered it is insane. (Kicker Collin Yeatts) can do some things with a football that’s pretty nice. That’s on me. If we get it, it looks great. If we don’t, it looks bad. I look bad in that spot, but I’ll take it. I own it. It was a decision I made, and it didn’t work out. I went for it, because of how well they were moving the ball offensively. I just didn’t feel good with 5 minutes and two timeouts left giving them the ball back.”

Northern Bedford’s Brady Clark: “It was one hell of a ride. I have no words to describe it. We had it, and we just lost it in the last couple minutes.”

Notable: Dalton Smith scored a pair of touchdowns for the Black Panthers, one rushing and one receiving. His touchdown catch was Thad Leidy’s Mirror-coverage area leading 22nd touchdown pass of the year. … Northern Bedford committed eight penalties for 85 yards. … Tussey Mountain’s Jarred Sipes had a kickoff return for a touchdown negated by a block in the back penalty in the first half.

Next week: Northern Bedford’s season is complete. Tussey Mountain will play District 10 champion Farrell next week in the PIAA playoffs.