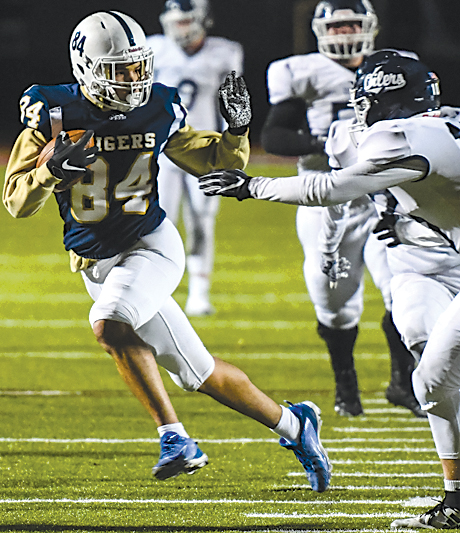 LORETTO — Hollidaysburg could only stop Noah Petro for so long.

The Golden Tigers held the Oil City senior to 26 rushing yards in the first half. But he rushed for 109 yards in the pivotal third quarter as the Oilers handed Hollidaysburg a 9-7 loss on Friday night in a District 6-8-10 Class 5A subregional playoff game at St. Francis University’s DeGol Field.

Hollidaysburg’s only score came in the first quarter when Trenton Paddock punched it in from the 1. The Golden Tigers kept the Oil City defense on its heels at times with his hurry-up offense, but were unable to do further damage.

The Golden Tigers took one last stab with 1:12 to play in the fourth quarter and no timeouts after they held Oil City on downs. A pair of pass receptions by Bryce Martellacci pushed Hollidaysburg from its 28 to the Oil City 42. It was as far as the Golden Tigers could advance, however, as time ran out.

Plays of the game: Petro’s 76-yard touchdown run erased a 7-3 Hollidaysburg lead and breathed life into a heretofore moribund offense. A missed field goal by Hollidaysburg’s Ethan Pinter from 24 yards with 7:27 left in the third quarter prevented the Golden Tigers from retaking the lead.

Player of the game: Petro rushed for 162 yards on 26 attempts. He easily cleared the 2,000-yards plateau with his 76-yard scoring run.

Oil City coach Dan York on how the Oilers dealt with Hollidaysburg’s hurry-up offense: “So we had to have our linebackers calling what we were doing right when they broke the huddle.”

DeLatrre: “We had a missed field goal, we had two red-zone opportunities and both times we ended up in negative plays. We had a penalty, we had another negative play on a fumbed snap on first down in the red zone. Those things take their toll after awhile (in) the execution part.”

Petro, on the first half: “They were just being more physical than us on the line, they were filling the right gaps. The linebackers were playing great.”

Martellacci: “I feel like there were things we could have executed better, me and everyone on the team. We played our hearts out. None of us wanted that season to end the way it did. But it is what it is. It was a great group of guys. (The Oilers) were a good team.”

Notable: Hollidaysburg turned to sophomore Jake McGinnis in the fourth quarter in place of Martellacci at quarterback. McGinnis completed 4 of 7 passes for 37 yards, including 35 to Martellacci (three receptions). … Martellacci completed 4 of 12 passes for 46 yards, including a long of 22 to Tristian Chaney. … Oil City’s Holden Stahl completed 5 of 11 passes for 105 yards. His 40-yard completion to Stalhman set up a 24-yard field goal by Max Latona on the Oilers’ first possession. … Paddock led the Golden Tigers with 63 yards rushing on nine attempts. … Hunter Barr added 55 yards on 12 rushing attempts for Hollidaysburg.

Next week: Oil City plays Southern Lehigh at a site and time to be determined.