Devils feeling blue: B-A takes Rams down to the wire in defeat 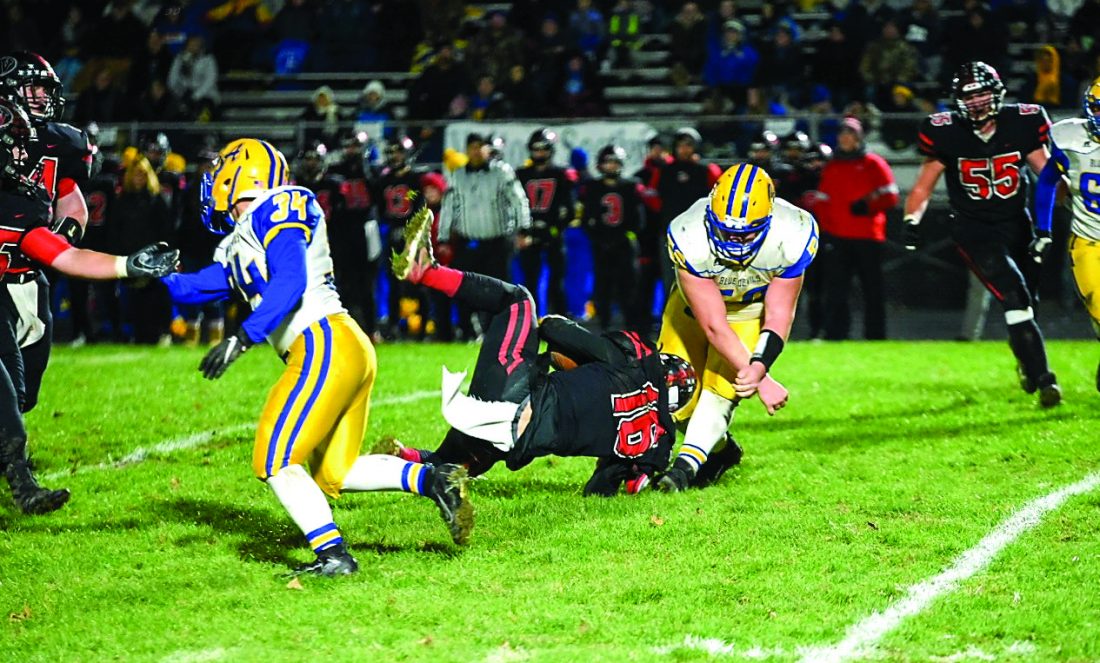 LIGONIER — After sending all their games into a mercy-rule mode, the Ligonier Valley football team nearly found itself on the short end in the District 6 Class 2A semifinals on Saturday night.

But the Rams survived a spirited Bellwood-Antis performance to come away with a one-point decision and advance to their fourth district championship game.

“Everybody was a little shook at the half,” Sheeder said. “We just had to keep playing like it was 0-0. It was pretty rough because we knew they were playing to win, too.”

The second-seeded Rams (12-0) will face top-seeded Richland (11-0) for the district title next Saturday night at Mansion Park Stadium.

“All the credit goes to those guys,” Roger Beitel said of Bellwood-Antis. “They were an undefeated program like us. That’s a great program and we knew that coming in. Those kids battled and made plays, but we were able to make some adjustments at halftime. We had a lot of heroes.”

“We talk about leaving it all out there on the field, playing with heart and passion and intensity,” Bellwood-Antis coach Nick Lovrich said. “We did all of that tonight. I can’t ask them to do anymore than they did. They battled with one of the best teams in the state the whole time. We played our best football game of the year and just came up short.”

Sheeder, who completed 13 of 19 attempts, fired touchdown passes of 11 and 31 yards to Marinchak, a sophomore, who made a leaping grab on the run in the end zone to give Ligonier Valley a 14-6 lead in the third quarter.

No. 3 Bellwood-Antis (11-1) took a 6-0 lead in the first quarter to hand Ligonier Valley its first deficit of the season, when Owen Shedlock caught an 11-yard touchdown pass from Trevor Miller, who completed 11 of 28 passes for 204 yards but threw four interceptions, two to Ligonier Valley’s Nick Beitel.

Marinchak’s 11-yard TD reception from Sheeder in the second, with the help of John Beard’s extra point, put Ligonier Valley ahead, 7-6 at halftime.

After Marinchak’s acrobatic catch with 8 minutes, 11 seconds left in the third gave Ligonier Valley an eight-point lead, Bellwood-Antis pulled even at 14-14 in the fourth as Zach Mallon scored on a 1-yard run and caught a two-point conversion pass from Miller.

Ligonier Valley’s Kyrie Miller, who gained 105 yards on 21 carries after returning from an ankle injury the previous week, gave the Rams the lead back, 21-14, on a 5-yard touchdown run after his 47-yard reception set up the play.

Ligonier Valley’s lead appeared short-lived as Bellwood-Antis, on the very next drive, closed the gap when Trevor Miller found Mallon for a 65-yard scoring pass

But Petrof broke through the line and blocked Evan Pellegrine’s extra-point attempt to keep the Rams in the lead by a point.

“I’m absolutely thankful that our kids faced some adversity out there tonight,” Rogers Beitel said, “because the way our guys reacted to that was incredible. It was a character test for our kids, and they came out with a hard-fought victory.”

It was Petrof’s second blocked kick of the night. He also blocked Pellegrine’s 28-yard field-goal attempt in the second quarter.

Bellwood-Antis drove deep to the Ligonier Valley 10 in the closing minutes and faced 4th-and-11 with 1:43 remaining before holding on when Miller’s pass into the end zone fell incomplete.