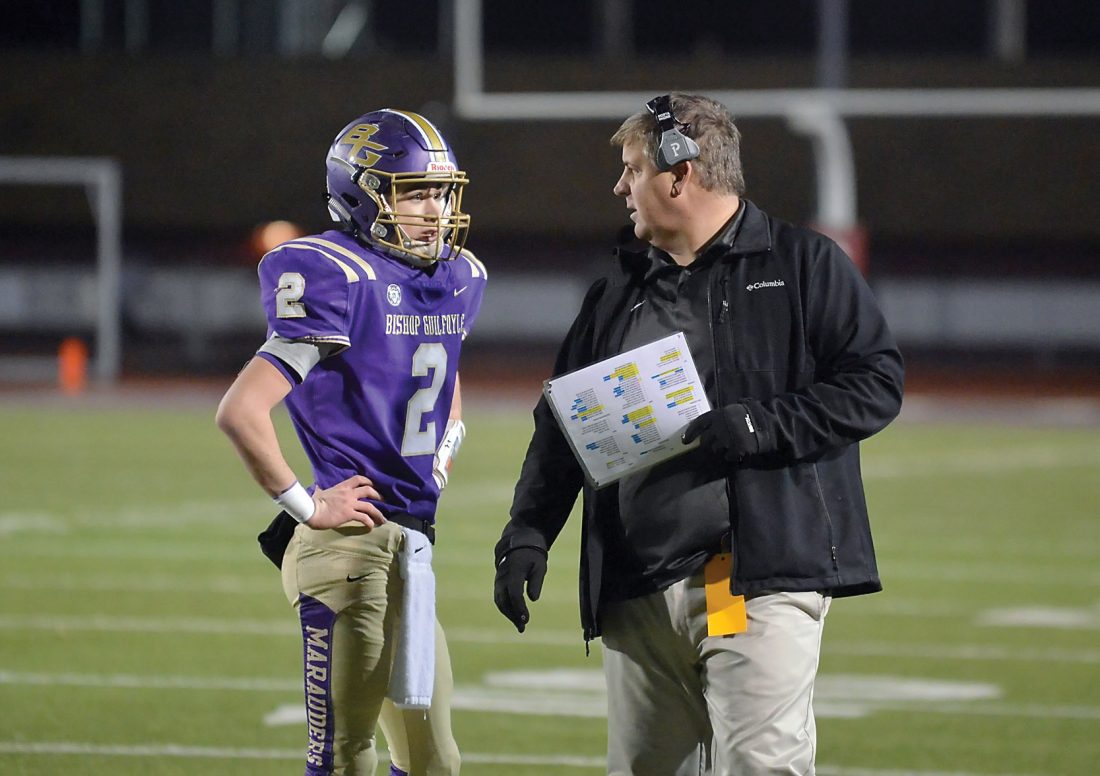 Since Wheeler took over at the school in 2011, winning the district title has been the hard part.

The previous three District 6 titles were followed by PIAA championships, and the Marauders are 8-0 in inter-district playoff games in that time period.

“That’s the great part about where our program is,” Wheeler said. “Expectations are there at the highest point, and each group passes that on. The last two years, the kids were prepared, but we just came up short (in districts). It’s a testament to what this program has become that this is the expectation.”

The last of Bishop Guilfoyle’s three consecutive Class 1A PIAA titles came in 2016, when this current group of seniors were freshmen. None of them played in any varsity games that season, but that was when players like wide receiver Sam Homan got his feet wet.

“At the time, seeing them win the title was really cool,” Homan said. “It was kind of crazy getting to see those guys do their thing, but we hoped we’d be the guys to get BG back to that point when it was our turn.”

They are one win against Lackawanna Trail at 1 p.m. Friday at Danville High School from at least getting back into the PIAA championship game. If the Marauders make it, they’ll play a familiar foe in either Farrell or Clairton, both teams BG has already beaten in the past for a state title.

“It’s exciting for the players,” Wheeler said. “As coaches, we’ve gone through it, and we know what it’s like. It’s pretty cool for the players experiencing playing on this stage for the first time.”

A combination of a leadership group that has been there and players hungry for a taste of what they’ve only had a chance to witness previously will help Bishop Guilfoyle.

But what may help even more is that the Marauders are getting healthy.

Quarterback Konner Kiesewetter returned from injury last week, and star running back and defensive back Keegan Myrick gutted it out, mostly from the offensive side (he played one snap of defense and had an interception).

“It’s huge having Konner back,” Wheeler said. “We haven’t really been too sophisticated in the passing game, because we have been missing him. It’s nice to run routes we put on the shelf eight weeks ago and run them the right way. If we become a threat in the passing game, that makes running the ball that much easier.”

Homan, who filled in for Kiesewetter at quarterback, is back as a wideout and caught two key first down passes against Juniata Valley.

“It’s definitely more comfortable this way,” Homan said. “It’s my natural position, and with Konner’s experience, we can be at our best.”

Myrick is also expected to play more on defense this week.

“We’re hoping he’s even better this week,” Wheeler said. “We need our best kids on the field as much as possible, and we plan on using (Myrick) on both sides of the ball as he gets healthier.”

With 1,595 yards on the ground, Myrick is just 101 yards away from tying Northern Cambria’s Adam Kopera for the rushing yardage lead in the Mirror’s coverage area despite playing in 11 of BG’s 13 games and being limited for several of those.

Along with the offensive line, Myrick has been assisted by fullback Zach McCloskey, who has become a force running the ball the past two weeks.

“Zach is a tremendous kid,” Wheeler said. “He’s made his living blocking for Keegan, but it has been pretty cool seeing him be the No. 1 back in a big game. That will also help our offense, because you can’t just focus on Keegan when our fullback has shown himself to be a dangerous runner.”

As the Marauders spend their Thanksgiving holiday preparing for a game for the fourth time in six years, they are already setting the tone for the next group of freshmen.

“By making it this far in the playoffs, everyone is getting extra reps,” Homan said. “It’s those extra reps and extra practice that I really think benefited us when we were freshmen and helped us get to this point.”