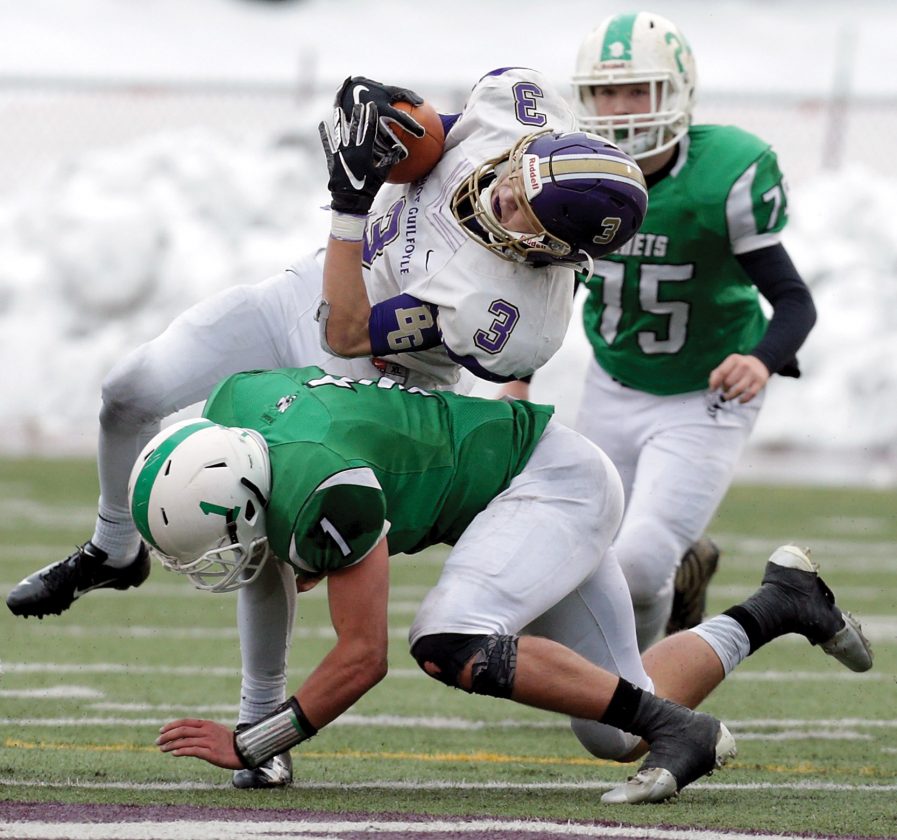 That, more than anything, made Juniata Valley’s 9-3 victory over the Marauders in the semifinals a year ago shocking.

The Green Hornets were actually the higher seed, forced to play at Mansion Park due to bad field conditions in Alexandria. They lived up to that seeding by stifling an at-times explosive Marauders offense and eventually went on to defeat United in the district championship before falling in the PIAA semifinals.

On Friday, the programs will meet again, this time in the district championship game at Mansion Park starting at 7 p.m. However, many of the players are different.

The Green Hornets are without 2018 Altoona Mirror High School Football Player of the Year Quinn Zinobile, 1,000-yard running back Jaxson Rand, and receivers Seth Derugen and Cameron Collins, among others.

Those losses alone make the fact these teams have survived the 12-team District 6 gauntlet and made it this far impressive.

“To have this opportunity again speaks volumes for our players’ work ethic,” Juniata Valley coach Bill Musser said. “The players’ display of maturity, playing each week as the hunted and responding. Even in our two loses, we understood better effort in our preparations may have created better results.”

Those losses, a three-point setback at Bellwood-Antis (which finished 11-1) and a two-point defeat to District 5 Class 1A champion Tussey Mountain, actually enhanced the reputation of this year’s Green Hornet squad, which features several new stars like quarterback Caden Rupert and 1,000-yard rusher Ryann Betres.

“I saw them live on Saturday (against Purchase Line),” Bishop Guilfoyle coach Justin Wheeler said. “They are big up front with guys like Elliott Showalter, but what really stands out is how athletic they are in their skill positions. They are an impressive team that can beat you running or passing.”

Leading receiver Grant Musser, a star both this season and last, ran and threw for a score and caught two more touchdowns in that game.

“The amount of work in the offseason and during the season has been great,” Musser said. “This group has a quiet confidence and the work ethic to match.”

While Juniata Valley has been among the top offensive teams in the area this year, Bishop Guilfoyle has fallen into the middle of the pack, often relying on explosive star running back Keegan Myrick, who rushed for 103 yards on 23 carries in last year’s meeting.

Myrick, however, left BG’s semifinal win over Saltsburg with an injury.

“I can’t imagine anything is going to keep Keegan out of the game,” Wheeler said. “He’s a competitor, and as long as he’s cleared, he’ll be out there.”

Myrick has nearly 1,500 yards rushing this year and is averaging a remarkable 7.3 yards per carry to go along with 20 rushing scores. He leads the area with 140 points scored as he’s also cashed in seven two-point conversions and caught a touchdown pass.

“We’ll lean on our offensive line,” Wheeler said. “It’s been huge. We have played four different quarterbacks and a number of different running backs. I’d love to say we’re going to throw the ball all over the field, but that’s just not who we are. Our offensive line has gotten us through some tough times.”

That line, which includes Robert Morris commit Brady Bithell, along with the Marauders’ experience at winning big games, is something Musser has discussed with his team.

“BG is BG. They have won three straight district and state titles (in the past),” Musser said. “They work hard in the offseason and are well-coached disciplined athletes. They understand what it takes to win and win repeatedly. We are still proving ourselves as we try to reach that level.”

The Green Hornets have shown the ability to score a little quicker this season, as Rupert is averaging 13.1 yards per pass completion.

“The biggest key for us is limiting their explosive plays,” Wheeler said. “Our expectation was to play for this title and win titles. Last year, we came up 9 yards short of getting back to the district title game, and the kids have been on a mission ever since. It’s important to this program. We’ve been there six of the last seven years, and we want to get back to the top.”