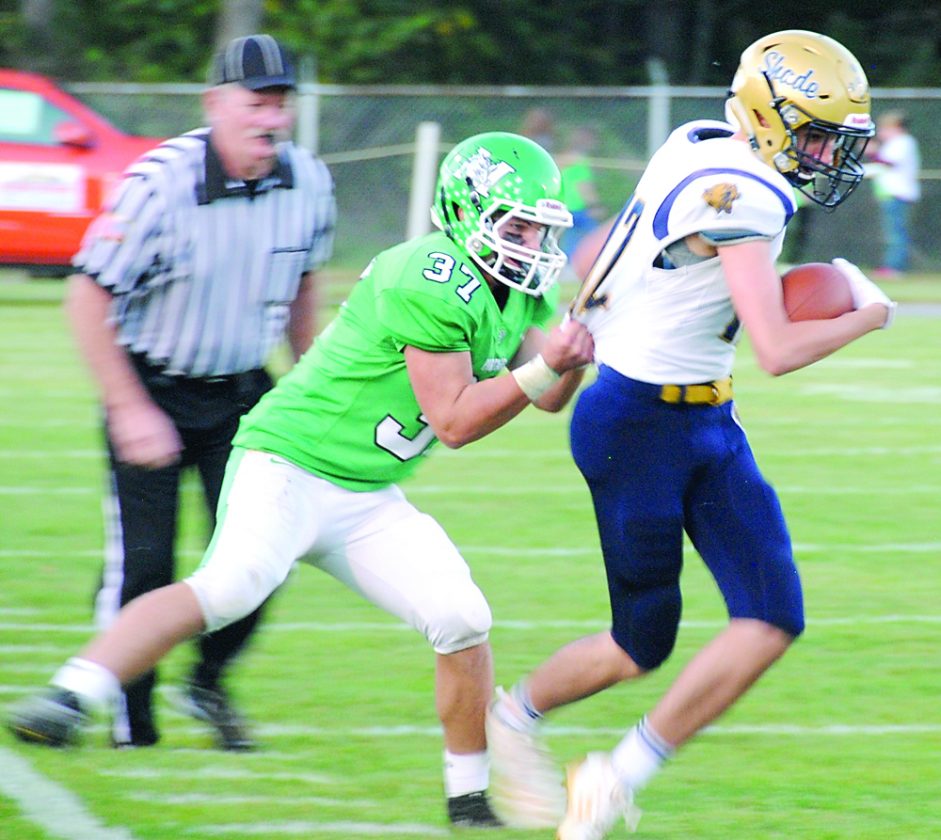 Photo for the Mirror by Brad Rosemas Shade’s Dylan Charlton is stopped by Portage’s Jon Wolford after catching a pass Friday night.

PORTAGE — Coming off their first loss last week, Portage erupted for over 450 yards of total offense and forced four turnovers on defense en route to a 62-13 win over Shade at Portage Stadium on Friday night.

Play(s) of the game: After holding a slim 14-7 lead late in the second quarter, Portage scored three touchdowns in three minutes to blow the game open before halftime.

Player of the game: Portage running back Gabe Forst ran for 177 yards and three touchdowns on 10 carries before leaving with an ankle injury early in the third quarter. He also recorded an interception on defense.

Most vital statistics: Portage rushed for 395 yards as a team, while holding Shade to 48. Shade also had more yards on their lone touchdown drive in the first half (55) than on their other six drives combined in the half (48).

Portage coach Gary Gouse: “We were angry from last week against Berlin. We still are, and probably always will be. We’re on a mission. We have to take care of business one game at a time. Our kids played well all over the place. I have to give Shade credit. They have some really good skill kids and they fight hard. They really do.”

Shade coach Don Fyfe: “We have got to stop shooting ourselves in the foot. It’d be one thing if we fumbled on their 30, but we did it on our side. Against a team like that, they’re going to score touchdowns. I think our guys got a little shell shocked and they didn’t really need to. It was a one score game, then they scored again. We went down the tank and it snowballed from there.”

Portage quarterback Connor Price: “We were really hungry to come back this year after losing to them last year. We were ready. We worked all week and fought as hard as we could. I do my hardest and do what I can for my teammates. I couldn’t do anything without my line. They’re the best.”

Notable: Forst ran for three touchdowns from 30 yards, 15 and 70, which was on the opening play of the third quarter. … Portage quarterback Connor Price ran for 79 yards and a touchdown on only three carries, and also threw a touchdown pass. … Shade quarterback Braden Adams went 5-for-5 passing on the Panthers’ first drive of the game, then only completed six of his final 16 passes while throwing two interceptions and fumbling twice. … All four of Shade’s turnovers eventually resulted in Portage touchdowns.

Next week: Portage travels to Ferndale, while Shade will host Conemaugh Township.