Long runs do in Mtn. Lions 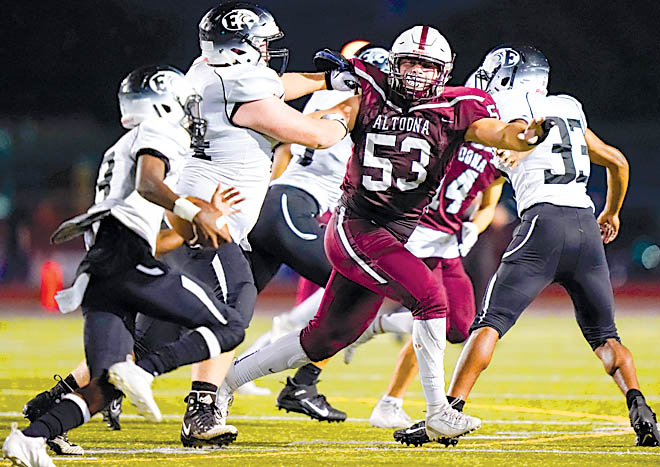 Adam Port fights off a block to make a play on CD East running back Shawn Brown.

There’s an old sports adage that speed kills. If they didn’t know before, the Altoona Mountain Lions and an elementary night crowd witnessed it first hand Friday night at Mansion Park.

Central Dauphin East running back Bryce Baker ripped off three touchdown runs of over 70 yards and left several Altoona defenders sprawling on the turf as the Panthers raced past the Lions, 35-19, in a Mid-Penn Conference Commonwealth Division game.

“We’ve got to tackle in space and we know what we’re up against. We know these teams have some speed and big-play ability, but we’ve got to rally and get more than one guy to the ball.”

The Lions finally got some offense in the fourth quarter. QB Marcus Day scored on a 3-yard run and then teamed with Nick Petucci on a 25-yard TD pass.

That cut the deficit to 21-13 with 6:49 left, but one play after the ensuing kickoff, Baker escaped several would-be tacklers and streaked 77 yards to paydirt. Altoona then went 3-and-out and East sealed the win when Baker was off to the races again, this time for 89 yards.

“We didn’t do anything different defensively,” Nedimyer said. “We were bringing pressure and they just creased us. When you’ve got a kid that runs like Baker, not many people in the state are going to catch him when he’s in the open.

“But, we didn’t do anything offensively until the fourth quarter, so we’ve got to get better on that side of the ball, too.

“We’ve got to be accountable. It’s not going to be from lack of effort. We have to get better.”

Play of the game: After Altoona pulled to within 21-13 with 6:49 remaining, CD East’s Bryce Baker broke a 77-yard touchdown run.

Unsung hero: Day rushed for 122 yards and passed for 268 in a losing effort.

Most deceiving statistic: Altoona had a 17-8 edge in first downs.

CD East coach Aaron Blanding: “(Baker’s) got the speed. When he hits the hole … he’s a north-south guy … he doesn’t make a lot of cuts. The line opened it up, he only needs a split second and he’s out.

“This is always a tough place to play. The crowd gets into it no matter what their record is and it’s a neat atmosphere for the kids to see.”

Baker: “I wouldn’t be able to do it without my linemen and the support of my teammates on the sideline.

Notable: Altoona senior Matt Streightiff was injured with nine seconds left in the half and was taken by ambulance to a local hospital. … A 5-foot-10, 170-pound senior, Baker runs the 100, 200 and 4×100 for the CD East track team. …Altoona’s honorary captain was Joe Eckels. Eckels has been president of the Big A Booster Club since 1992 and was recently named Blair-Bedford Labor Council Person of the Year. He’s an Altoona alum, class of 1964.