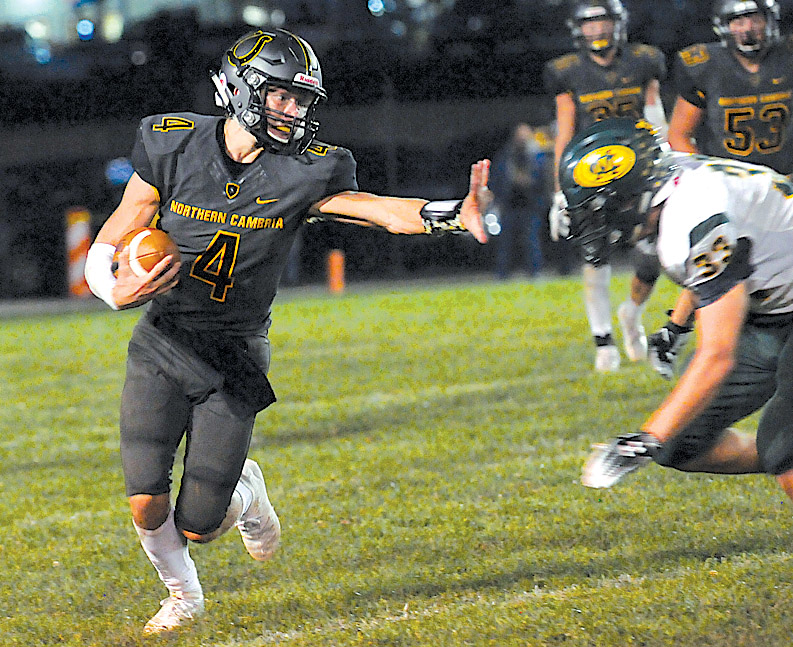 NORTHERN CAMBRIA — The injury bug has continued to derail the Northern Cambria football team, which was evident Friday Night against Marion Center at Duffy Daugherty Stadium.

With backup quarterback Owen Prasko under center and several other starters missing from action, the Colts suffered even more injuries late in the game and fell to the Stingers, 24-7, for their third loss of the season.

Player of the game: Marion Center running back Garet Wells, who carried the ball 15 times for 72 yards and scored two touchdowns in the game. He also led his team with four receptions and 27 yards.

Play of the game: In the third quarter, Wells made a one-handed catch, weaved through the Northern Cambria defense and scored a 30-yard touchdown to increase the Marion Center lead to 18.

Unsung hero: Marion Center linebacker Mike Wise, who burst through the A-gap and jumped in front of Jorden Wise’s punt following Northern Cambria’s first possession of the game. With the ball spiraling on the ground, Xavier Vaglia scooped up the loose ball and returned it 34 yards to the house to open the scoring.

Most vital statistic: Northern Cambria turned the ball over on downs six different times. The first Colt punt was blocked, and punter Jorden Wise was tackled on Northern Cambria’s second punt attempt. The Colts did not attempt a punt again until late in the third quarter after four failed fourth-down conversions.

Marion Center coach Adam Rising: “(Northern Cambria’s) got some big guys up front. They have size, and they’re tough. We had a tough time. I told the guys we had to get in space… They were able to open up space. (Garet) Wells ran hard and punished guys on his runs.”

Marion Center running back Garet Wells: “Our line did a great job. They knew all week they were going to have to come in and dominate, and they did just that. That opened up space for me.”

Northern Cambria coach Sam Shutty: “The deck has been stacked against us, but we’re doing the best we can. We’re moving forward. We’re staying positive and upbeat. We’re going to work with the guys we have right now.”

Northern Cambria lineman Zach Daisley: “We made a lot of mistakes tonight. Marion Center is a very tough team. They’re a very good team. We just got outplayed tonight. We have lots of injuries right now, and losing (Adam) Kopera and (Isaac) Noll-those are big losses for us. Our injury list keeps piling up, and it just isn’t getting any easier.”

Notable: Northern Cambria was flagged for three separate penalties that cost the team 23 yards in a first-and-goal situation The Colts were only penalized five times the entire game. … The Colts outgained Marion Center, 236-212. … Colts starters Isaac Noll and Adam Kopera were both injured on the same play late in the game. Neither returned. … Due to a previous injury to Mike Hoover, who was seen wearing a boot on his foot during the game, Owen Prasko earned the start at quarterback for Northern Cambria.