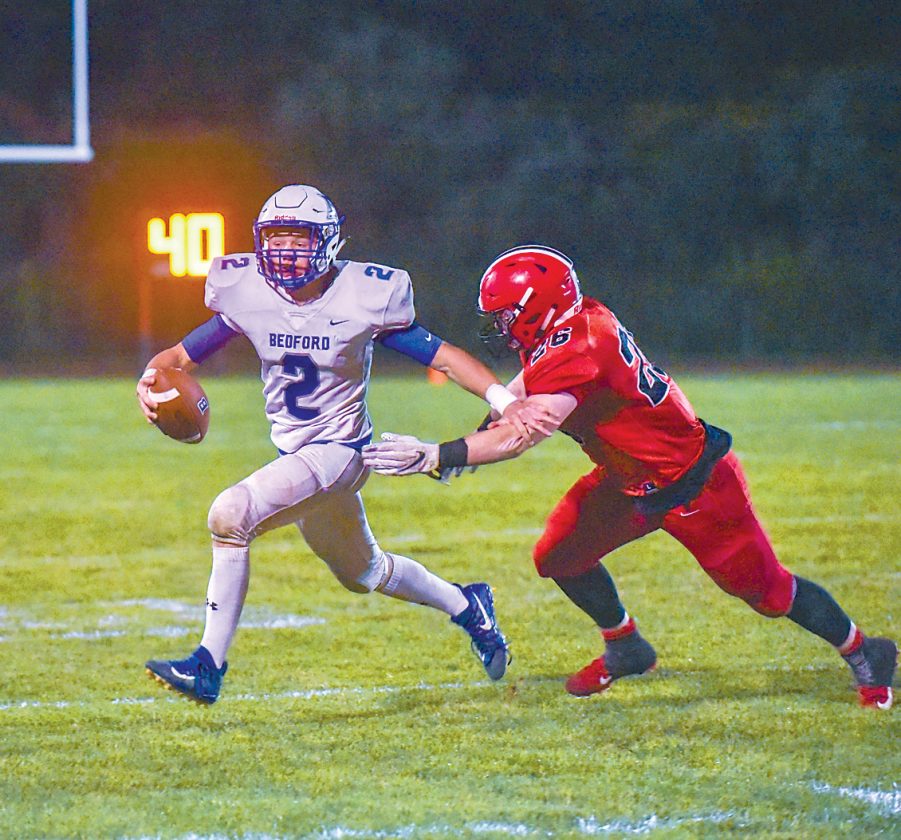 Photos for the Mirror by Tami Knopsnyder Bedford’s Mercury Swaim is chased by Central Cambria’s Dylan Long in the third quarter.

EBENSBURG — Bedford scored five touchdowns on drives of two plays or less and pulled away from Central Cambria in the second half to win, 48-15, at Alumni Stadium Friday.

The Red Devils trailed just 14-9 at the half after Nolan Johnson’s field goal in the final second of the second quarter, but the Bisons outscored Central Cambria, 20-0, in the third quarter.

Play of the game: Bedford’s Spencer Ebersole took his only carry of the game 52 yards for a score on the second play from scrimmage in the second half to make it a two-score game.

Player of the game: Bedford’s Mercury Swaim ran for 123 yards and two touchdowns on just eight carries. He threw a 28-yard touchdown pass to Steven Ressler and had a 50-yard touchdown pass called back due to a penalty. Swaim also intercepted a pass on a two-point conversion attempt after Central Cambria opened the scoring with a Dylan Long touchdown.

Unsung hero: Bedford coach Kevin Steele praised the offensive line, anchored by Jesse Arnold, who also had a big hit for a sack on Red Devils quarterback Carter Seymour early in the third quarter when the game was still competitive.

Most vital statistic: Five of the seven Bedford touchdowns were on plays of 21 yards or longer.

Bedford coach Kevin Steele: “We had too many penalties in the first half that really destroyed us. We did a better job defensively in the second half, and at the end of the day we’ll take it, but there’s still a lot of work to do to get to where we’re capable of getting.”

Bedford quarterback Mercury Swaim: “We knew we didn’t perform to our best level in the first two quarters, but we came out in the second half and played to our best potential. We have to put together four quarters.”

Central Cambria coach Shane McGregor: “That’s a really good, well coached, well-disciplined team. They are going to win a lot of games, and for a half, we were right there, neck and neck with them. The thing is, you play two halves.”

Central Cambria running back Dylan Long: “Our first half, against a very good team, we held our own. We played good defense, and we moved the ball great on offense. There’s definitely positives to take away from this.”