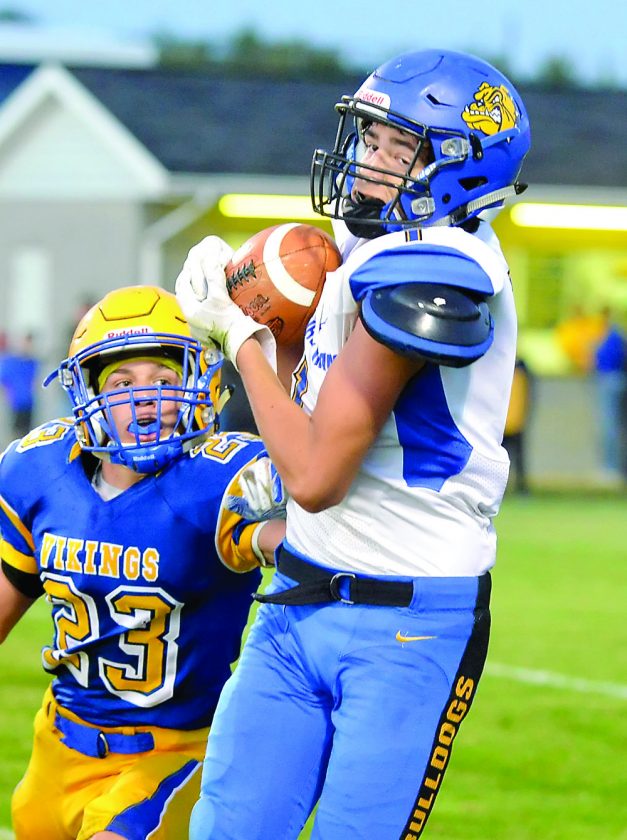 FLINTON — Claysburg-Kimmel scored two quick touchdowns for an early 12-0 lead against Glendale and was on its way to a third when the Vikings defense forced a turnover on downs.

Glendale answered with a score of its own to make it a 12-7 game.

The game turned into a defensive struggle after that with Claysburg holding on to win by that same score, spoiling Glendale’s homecoming Friday night at Dr. Roy F. Baker Athletic Field.

After losing their season opener, the Bulldogs have won four straight. Glendale falls to 3-2.

Play of the game: With 9:12 left in the game, Glendale was pinned at its own 1. The Vikings ran 15 plays, driving the ball to the Claysburg 31 where they faced 4th-and-8 with 1:16 left. Garret Misiura dropped back to pass, but just before the pocket collapsed, he took off up the middle then headed for the sideline. Kadin Hileman and Joseph Noah tackled the junior QB along the boundary three yards shy of the first down to seal the win.

Claysburg linebacker Seth Musselman: “They had some momentum there at the end and drove the ball down the field on us. We called timeout, talked with the coaches, calmed ourselves down as a team and made the stop.”

Player of the game: Playing with an injured arm, Musselman set the tone for the game on Glendale’s first offensive play, sticking Seth Dudurich hard at the line scrimmage for no gain. The senior linebacker chased down the Vikings’ ball carriers from sideline-to-sideline, finishing with 14 total tackles.

Claysburg coach Matt Bilchak: “He’s played great for us all season, and (Friday) he took his game to another level. He was one of the guys we were a little bit concerned with earlier in the week. He was kind of banged up. Come game time he was ready to put the pads on and go to work. He provides great leadership and gets the guys going in the right direction.”

Unsung hero: In addition to being in on the fourth down tackle of Misiura, Hileman downed Wyatt Buell’s fourth quarter punt at the Glendale 1, forcing the Vikings to drive 99 yards for a potential game-winning score.

Glendale coach Spank Trexler: “We’re a running-type team, and we were allowing a lot of penetration. We couldn’t get anything going until the fourth quarter and by then, it’s a desperation drive. When we look at the film, we’re going to see it was a play here, a play there. A lot of missed opportunities that need to be looked at, but I think we’ll grow from it.”

Notable: Claysburg QB Corey Chamberlain passed for 170 yards and a touchdown in the first half. He completed just two passes for 10 yards in the second half. … Preston Bush caught seven passes for 94 yards and a touchdown, all coming in the first half. … Cory Johnston led Glendale with 80 yards rushing, 50 of which came on the final drive. … Misiura completed 7-of-9 passes for 93 yards, including a 44-yarder to Blaine Seilhamer that set up the team’s only score. … Katieanne Rydbom won homecoming queen, and Timmy Williams took home homecoming king honors.