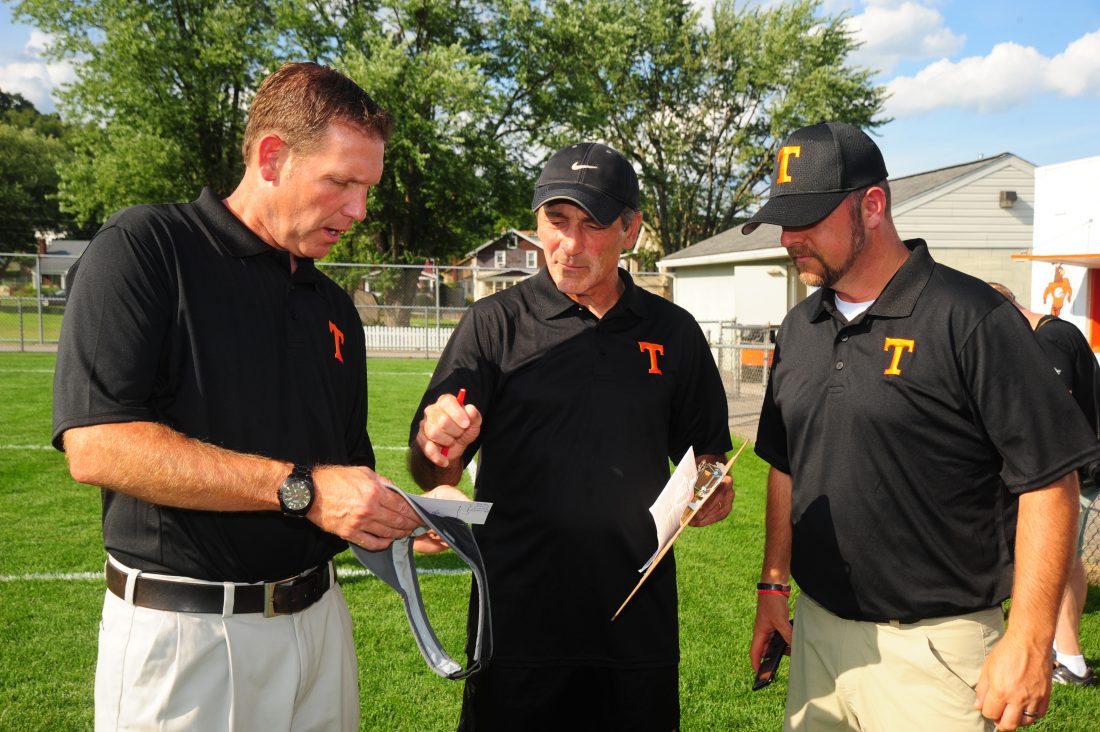 Photo for the Mirror by Manning Photography John Franco (center) talks with two of his assistant coaches during a recent practice at Tyrone’s Gray-Vets Memorial Field.

WINGATE — The last time John Franco coached a game for the Tyrone Golden Eagles, it was for the state championship.

Franco and Tyrone have both had their ups and downs since.

Tyrone won a District 6 title under Jason Wilson after struggling for a few years with Steve Guthoff at the helm, and Franco helped Altoona secure a spot in the WPIAL playoffs and won a playoff game in his second tenure with the Mountain Lions.

But neither Franco or the Golden Eagles have experienced the sustained success they had over his first 18 years at the school.

While Franco will return to the sideline in just a few short weeks when Tyrone travels to rival Bellwood-Antis for its 2019 opener, neither he or his players feel any pressure to immediately live up to his first run at the school.

“The players don’t feel any pressure,” said Franco at the Mountain League’s media day at Bald Eagle Area High School recently. “I think they are just excited to be part of it. I’ve seen that excitement. I think the pressure is when you’re winning all the time and then you have to maintain it and keep doing it. The 18 years I was at Tyrone, the last 17, every year those teams had to live up to what the team did before them. They were always under pressure. I don’t see that with these guys. They want to get back to that, and they are excited to get started and try to rebuild it.”

Brandon Homan, one of the team’s top returning wide receivers, agreed with Franco.

“With him being there, he takes the pressure off of us,” Homan said. “He lets us know we’re a team, and we’re just playing for each other. He did a lot of great things here, but we’re just worried about us and this team this year.”

Franco was gone for seven seasons and said the biggest thing that’s changed is that Tyrone isn’t always putting its best possible team on the field.

“It feels like coming back home,” Franco said. “Really not a lot has changed. The main thing we’ve been working on is to rebuild the structure. We’re working on the youth programs and the junior high programs and trying to get the kids to come back out. If anything has changed, we’re losing some kids that haven’t come out that always came out. The 18 years I was there, I could probably count on one hand the kids that didn’t come out that should have come out. Now there’s a lot more of that.”

Last year, Tyrone topped its two biggest rivals in Bellwood-Antis and Central to begin the season and started 4-0.

But six straight losses, including one to Huntingdon in the regular season-finale that was basically a playoff play-in game, played a role in Wilson not being brought back as head coach.

Franco, in the middle of a remarkable turnaround at Penn Cambria, couldn’t resist the chance to return to the school he’s experienced his most success when Tyrone reached out to him.

“The pressure is on me, and that’s OK, because that’s who it is supposed to be on,” Franco said. “I’ve always tried to keep pressure off the players, and in the past, we’ve been successful with that. This is not something where we can wave a magic wand. I have no magical formula. It’s just getting back to hard work, discipline and doing the right things. If the Tyrone kids are as good as I think they are, eventually they will be good again.”

The attitude of the players has seemingly already changed.

Though Franco regrets that not all the players he’d like to see on this year’s team are out on the practice field, he doesn’t blame the success of other boys sports at the school. Tyrone was the top seed in the District 6 baseball playoffs and has maintained sustained success in its boys basketball program over the past decade.

“Success breeds success,” Franco said. “When you’re in a small school, kids play multiple sports. Those teams are always the best teams. We have a lot of baseball and basketball players who are coming out, and those players are the best football players. When you’re in a small school, you can’t take a kid and force him to play one sport. First of all, it’s not good for them at that age, secondly, it’s the competitiveness of all the sports that helps them succeed in each sport.”

“It’s really important for kids to play as many sports as they can, and you work with the other coaches. When it comes to offseason programs, there’s plenty of room for everyone. I think that’s going to be a bonus for us that we’re good in other sports as we get back to being good in this sport.”

For Tyrone fans craving the success of the highest heights of the program’s history, they’ll only have to wait until the second week of the regular season. Franco will be honoring the 20th anniversary of the Golden Eagles’ state championship team from 1999 that defeated Mount Carmel.

He’s hoping the anticipated big crowd that night will become the norm once again.

“I know the crowds have gone down a little bit,” Franco said. “But I think Tyrone is a football community. They are very knowledgeable football people, and I think we’ll have good crowds. I guarantee the first two games, crowds will be pretty good. After that, it’s up to us and how we play. If we play at a level they appreciate, I think people will come out. We’ve got to perform at the level they expect.” 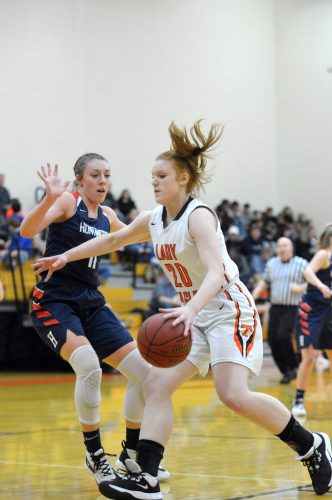