Finest in their finale: Akers helps South to win 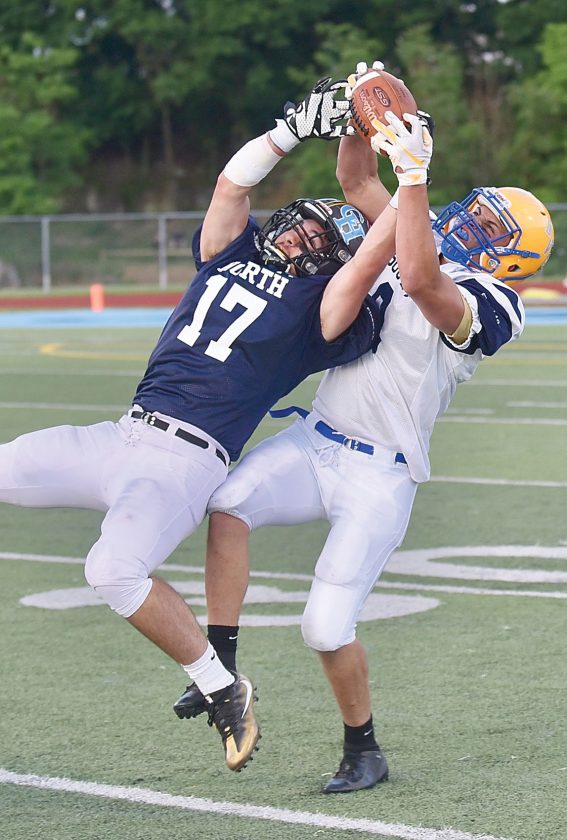 Photo for the Mirror by Tami Knopsnyder Northern Cambria’s Mark Marino (left) breaks up a pass intended for Chestnut Ridge’s Jared McGill during the second quarter of Friday night’s game.

JOHNSTOWN — In the week leading up to the game, Macen Akers wasn’t sure which side of the ball he’d play on in the 49th annual Ken Lantzy Finest 40 All-Star Classic.

Lucky for the South team that the coaching staff ultimately decided to put him at quarterback.

The Everett graduate led the go-ahead touchdown drive in the fourth quarter as the South pulled out a 28-21 victory at Trojan Stadium.

He was just 4 of 10 passing for 53 yards, but Akers carried eight times for 49 yards, including a 20-yard keeper on a zone-read play on the possession that led to the final score.

“Coming in, they didn’t know if I was going to play defense or offense,” Akers said. “They finally put me on offense, so we put a few run plays in that they knew I was going to run. We put our little read in at the end of the week, and it ended up working. I got a pretty good run off of it.”

The zone-read play was quite effective.

“It was supposed to be a straight give, but they gave me the option, they said if (the defender) comes straight down, just pull it. That’s what I did, and it ended up working.”

Everything leading up to the game worked for Akers as well.

“It was one of the best experiences of my life,” he said. “All of these kids, I made so many good relationships with everyone. I was a little nervous coming into it, because I didn’t know what to expect, but I love every single one of these guys on the team. It was so much fun.”

Northern Cambria’s Ben Vasil, who had nine carries for 70 yards and a first-quarter touchdown in the loss, also enjoyed the Lantzy experience.

“It was awesome,” Vasil said. “Just playing with different players from different schools, it was incredible.”

Vasil was also thrilled with the role he played in the all-star game.

“I was expecting to get less carries than I got, but it was exciting,” he said. “I would have been stoked with three carries.”

Cambria Height’s Damon Maul provided a big target for North quarterbacks John Caldwell of Ligonier Valley and Joe Hauser of Richland. Maul caught five passes for 46 yards, including a 7-yard touchdown in the third quarter that tied the game at 14.

The North dominated the first half statistically, but trailed 7-6, as Shade’s Brady Fyfe — a Lock Haven recruit — hooked up with former Panthers teammate Dawson Snyder, who is headed to Saint Francis – for an 87-yard touchdown pass in the second quarter.

Fyfe was 7 of 12 passing for 166 yards and three touchdowns. Snyder had two catches for 92 yards.

The offenses found their rhythm in the second half. Fyfe’s 14-yard touchdown pass to Blacklick Valley’s Jude Gdula extended the South lead to 14-6. The North responded with Caldwell’s touchdown pass to Maul and a conversion pass from Hauser to Forest Hills graduate Jake Shope that was 15 yards longer than normal after an unsportsmanlike call following the touchdown.

Less than two minutes later, the North tied it again. Brendan Mondi’s 2-yard run made it 21-all.

Akers keyed the go-ahead touchdown in the fourth quarter, but the North had opportunities to stop the drive. Northern Cambria’s Mark Marino put a big hit on Bishop Guilfoyle’s Daniel Potopa at the North 8-yard line after Potopa caught a swing pass from Akers. That set up a fourth-and-1 play, but the North defense jumped offside to give the South a first down.

The North came up with three more stops before Conemaugh Township’s Cory Myers plunged into the end zone on a fourth-and-goal play from the 1 with 6:03 remaining.

Conemaugh Township’s Logan Walerysiak booted his fourth extra point of the game to make it 28-21.

The North had two more opportunities to tie the game — including one after a fumble recovery by Tussey Mountain’s Damon Lemin — but the South defense stood up to the challenge, forcing a turnover on downs with 50 seconds remaining.

That allowed the South to run out the clock.

“Our defense did amazing tonight,” Fyfe said. “I can’t think them enough.”