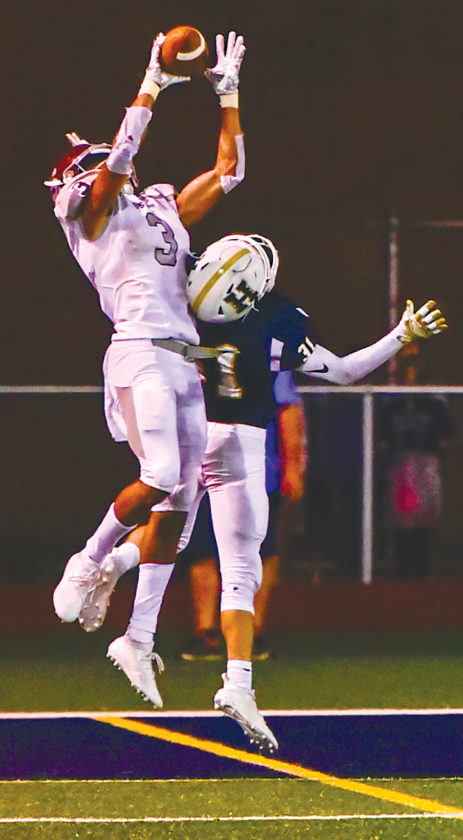 Photo for the Mirror by Tim O’Brien State’s Keaton Ellis goes up over Hollidaysburg’s Ben Drass for a touchdown.

HOLLIDAYSBURG — Because of the steamy, hot weather this high school football season, the State College Area High School football team has not had a practice in full pads in two weeks.

At 3-0, imagine what will happen once the Little Lions do.

Behind a balanced offensive attack and a defense that forced Hollidaysburg into five turnovers Friday night at Tiger Stadium, the Little Lions won the battle against the Tigers, 49-22, in a game that featured 2-0 teams.

“They are very efficient and they have a lot of weapons,” Hollidaysburg coach Homer DeLattre said. “They can run. They can pass the ball. They are really good.”

State College had the ball six times in the first half and scored five touchdowns. Both first-quarter drives ended in 1-yard runs, courtesy of quarterback Tommy Friberg and tailback Isaiah Edwards. Those scores were sandwiched around the first of Hollidaysburg’s five miscues.

“We haven’t had those takeaways this year,” State College coach Matt Lintal said. “That was a huge factor in this game. Hollidaysburg is an extremely well-coached team, but defensively we stepped up, and getting five turnovers is a huge predictor for winning this game.”

Hollidaysburg got on the board with a touchdown in the second quarter at the 11:08 mark. Tiger quarterback Brady Walters made a huge play on fourth-and-goal from the 18 when he hit Austin Weakland in the back of the end zone. The Ethan Pinter kick made it 13-7.

“Their quarterback (Walters) is their guy,” Lintal said. “He can hurt you in a hurry.”

But just like that, State College scored on its next possession, needing just four plays to score on a 13-yard touchdown pass from Friberg to Penn State recruit Keaton Ellis for a 20-7 lead.

And if that wasn’t enough, Ellis picked off a Walters pass on the Tigers’ next possession, as they were moving the ball on State College, and returned it 87 yards for a touchdown. However, it was called back on a penalty on the return, but State scored six plays later on a Friberg 22-yard run to make it 27-7 at the 2:53 mark.

“We were wide open on his interception, too. There is probably just one kid in Pennsylvania that can make that play, and he did. It’s him or we have a touchdown,” DeLattre said.

State College scored right before halftime after a 30-minute delay when the Tigers’ Robert Smith was injured on a kickoff return. The senior was taken by ambulance, strapped to a backboard to keep his neck from moving, but he was seen lifting his hands in the air as he was leaving the field.

“He got caught up in a pile (on the kickoff). He was talking and that kind of stuff,” DeLattre said. “We are going to check on him.”

Ellis caught a 28-yard touchdown pass with 1:28 before halftime to make it 34-7. The Tigers scored on their first drive of the second half — a 6-yard run by Walters on a fourth-down play, to make it 34-14. But again, State answered with an 85-yard kickoff return for a score by Dresyn Green to make it 41-14.

“We had some plays, we moved the ball on them,” DeLattre said. “They are really good, but we have to get better. Every mistake we made is correctable, and like I told our guys, we will work to get better. I trust the senior leadership on this team. I don’t think we will have a bad practice next week. I promise you that.”

Lintal believes his team’s success is more than just its array of offensive weapons.

“We have a lot of playmakers, yes, but our kids really trust each other,” he said. “That is the most important thing to me.”

Game notes: Hollidaysburg finished with 301 yards of offense, 27 less than State College, but the four interceptions and one fumble were costly. The Little Lions did not turn the ball over and only punted once. The Golden Tigers did not punt at all … Hollidaysburg hosts Cedar Cliff on Friday.