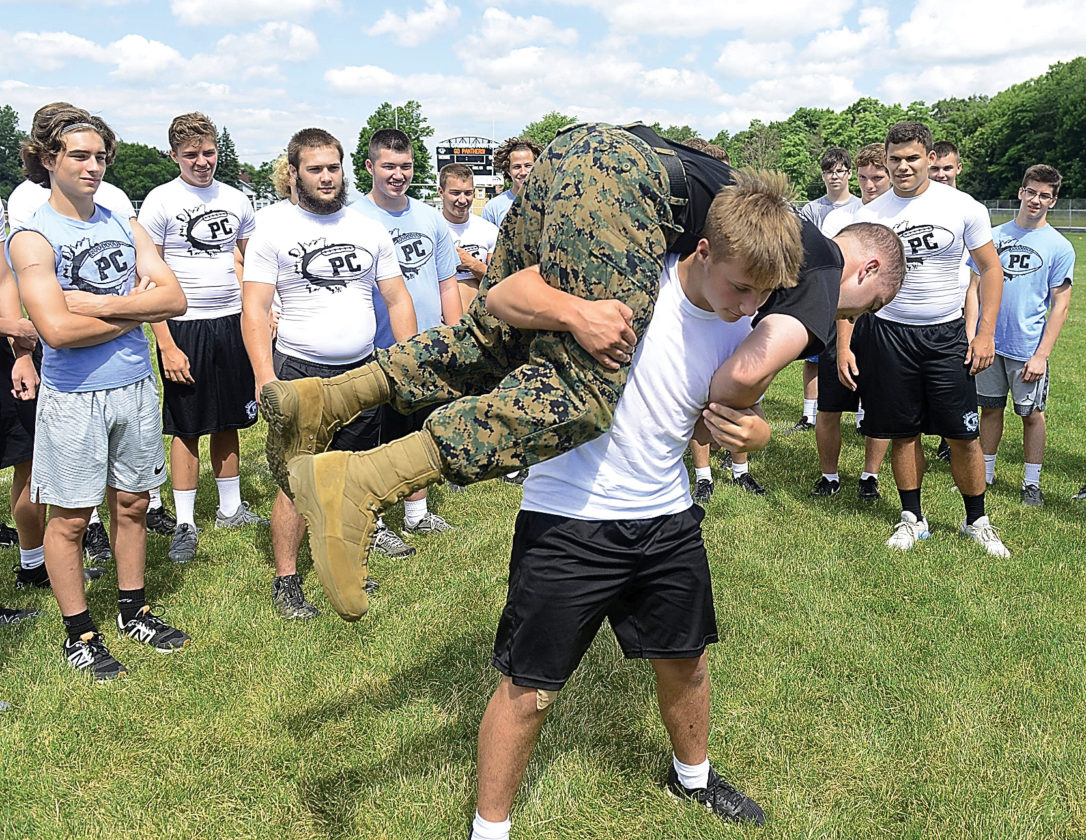 07/19/18 By Gary M. Baranec Penn Cambria's Ethan Schilling demontrates to his teammates how to do a fireman's lift (or carry) by picking up Marine Staff Sgt. Ray Penny) during a morning practice session for the football team. Penny and Sgt. Eli _______________) put the football team through the Marine combat fitness test Thursday.

CRESSON — Conditioning for the upcoming season came with an added twist on Thursday for the Penn Cambria football team.

Instead of the usual endurance and strength training the team has been used to, members of the Panthers team were trained by a pair of former United States Marines.

Players went through a tough workout process, with exercises included lifting 25-pound ammunition containers, firefighter-carrying teammates on their backs, crawling low on the ground and even throwing empty grenades.

“They trained us just like Marines train,” Panthers junior Ethan Sanders said. “It was fun, but it was pretty tough. Overall, it was a good experience.”

Penn Cambria coach John Franco said that he discovered the idea of training with Marines several years ago at a coach’s clinic.

Franco, who is entering his second season at the helm for the Panthers, is coming off a season that saw his team finish 0-10. But losing is something that Franco has not typically been accustomed to over the years.

Before making his way to Cresson, Franco had won eight District 6 titles, had three state finals appearances and claimed one state title during his career with both Tyrone and Altoona.

Learning from these conditioning gurus, Franco said, is an opportunity for the players to get tougher and to get in better shape for this season.

“The Marines teach toughness,” Franco said. “We need toughness today more than ever. Not just in our football team but in our youth all together. This is an outstanding program to really bring that out.”

Beyond prepping his player’s bodies for football season, Franco said there was a learning lesson involved. The reason he had the Marines come was because he wanted his Penn Cambria team to understand was how to work together as a team.

Sgt. Ray Penny, who was one of the Marines that trained the players, said that teamwork is one of the most important aspects to learn in life.

“Teamwork is what we strive upon,” Penny said. “At times Marines can be self-reliant, but at some point, you’re going to need someone to lean on. We always have those Marines to our left and to our right to help us out in those situations. Teamwork is one of the biggest things that keeps the Marines together, and the same can apply to football.”

It was a tough day in the sun for the Panthers. Players were forced to carry teammates several yards on their backs, and many wanted to give up. Franco said that being mentally tough is what makes a good football team.

“It’s not just physical toughness, but mental toughness,” Franco said. “That idea to keep pushing and not giving up. That’s something every good football team needs.”

While it was a tough day for the athletes, Franco said his players embraced the challenge.

“The kids really like it,” Franco said. “It’s a nice challenge for them.”

In their second year under Franco, Penn Cambria is currently in the middle of a rebuild. With the program diminished and not as many students participating compared to years past, the long-time coach said the program is in the process of a shift in culture

“We need a total culture change here,” Franco said. “We’ve done a lot of team-building exercises this summer, and we’re trying to get our kids more disciplined, more accountable and more responsible. We think that’s happening right now. Once that happens, I think you can attract more kids to come play.”

Much like their hecoach, members of the team were not pleased with their performance last season either.

Panthers lineman Caleb Hurley said the team is working hard and doing whatever it can to string some wins together this year.

“We’re doing everything we can to get better,” Hurley said. “From conditioning to extra weight training, we just want to get better.”

Sanders said that with all of the hard work, his team is hoping to be rewarded this fall.

“All of us have been lifting and attending all the workouts,” Sanders said. “We’re all dedicated, and we’re trying to make the playoffs this year. That’s our goal.”