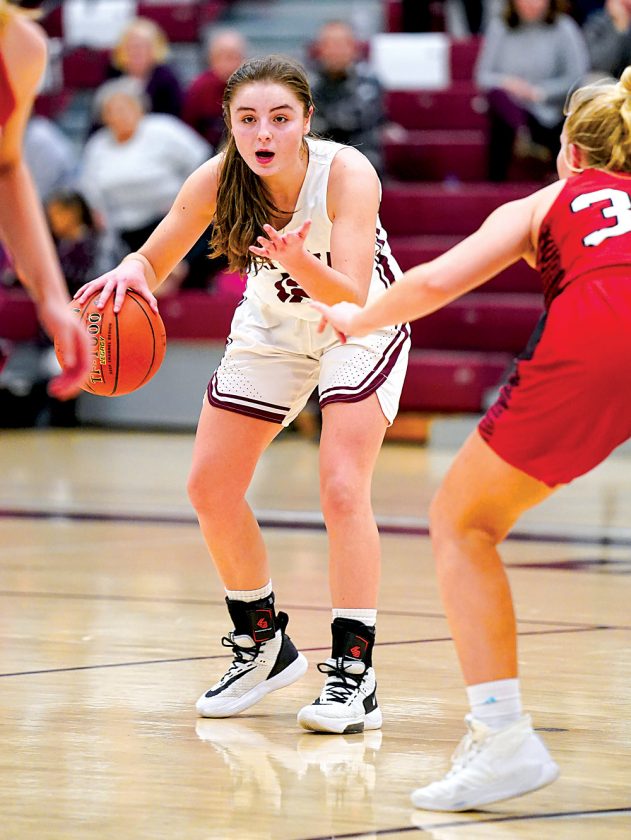 Adalynn Cherry working to set up the Altoona offense.

High school basketball season is still a long way away, so any potential worries about that season starting on time have been pushed to the back of players’ minds.

But for many of those athletes, the season never really stops.

The COVID-19 pandemic has already interfered with the first two live periods of AAU basketball.

“There’s a lot of uncertainty on if or when we’ll get started,” said Mike Reed, who operates the Central PA Dynamite local AAU squad. “You get mixed signals basically every week, kind of like the rest of the news. Sometimes, signs point to having college coaches out for the live periods in July, and then the next day it will be said there’s no chance for coaches to be out. So, it’s difficult to plan.”

For some players like Tyrone rising junior Jaida Parker, the virus canceled both her chance at a state championship in high school when the PIAA stopped the season in the state quarterfinals and the first two legs of her AAU season.

“It’s really tough, because so many players, including myself, won’t have the opportunity to be seen by college coaches in person,” Parker said. “And overall, the AAU experience is great with all the traveling, the competitiveness and being able to play all year round.”

Reed has been doing everything he can, within the restrictions, to get his players exposure.

“We are still actively contacting coaches and sending highlights and film out on kids and leaning on the relationships that we’ve built with college coaches in the past,” Reed said. “We don’t have the surefire Division I kids that we had last year, but numerous kids who could certainly play Division I with good showings this AAU season. Those are the ones that stand to lose the most.”

Altoona rising senior Adalynn Cherry is one of those upper-tier players, but she’s keeping a positive outlook.

“We are losing an opportunity, but hopefully there’s still a chance we get to play in front of some coaches,” Cherry said. “I feel like with all this, recruiting is probably going to be pushed back. They know what’s going on, and if they need to come watch us during our high school seasons, they will.”

Meanwhile, Reed and some of the other local AAU programs have been working together to try and come up with contingency plans if the pandemic rules out July travel to bigger locations.

“We’re leaning toward working with some other programs like the Western PA Bruins, Slaam Basketball out of Pittsburgh and so forth,” Reed said. “There are about six or eight programs in this part of the state that we are working with possibly doing some things in July that are confined to the weekends and would be more local as opposed to running off to big national tournaments. We could live stream those if coaches aren’t allowed to be out.”

Juniata Valley rising senior Olivia Smith, whose sister Halee earned a Division I scholarship to Quinnipiac after playing for the Dynamite, is just hoping to play with her teammates again.

Until there’s a change, Olivia and Halee have been working together trying to keep their skills up and themselves in shape.

Reed said his program isn’t struggling financially like some AAU programs across the country and won’t even if refunds become necessary.

“We have kids and parents who have already paid, but if we don’t play, they are going to get their money back. If we don’t get them the full experience, we’re not going to take money from them,” Reed said. “From our standpoint, the financial thing is not a big issue. The bigger thing is, even if we can play, are parents going to be able to attend? You just spent maybe eight weeks off work. Now you come back and ask if you can take your kid to Kentucky to play basketball for four days or a week. I don’t think that’s going to be realistic.”

Reed said that while money isn’t an issue, missing out on seeing his players reach a goal is something he takes very hard.

“For me, the satisfaction comes from seeing kids get to extend doing what they love to do and play in college,” Reed said. “When those opportunities are lessened, it’s tough for me personally. We want these kids to reach their dreams.”