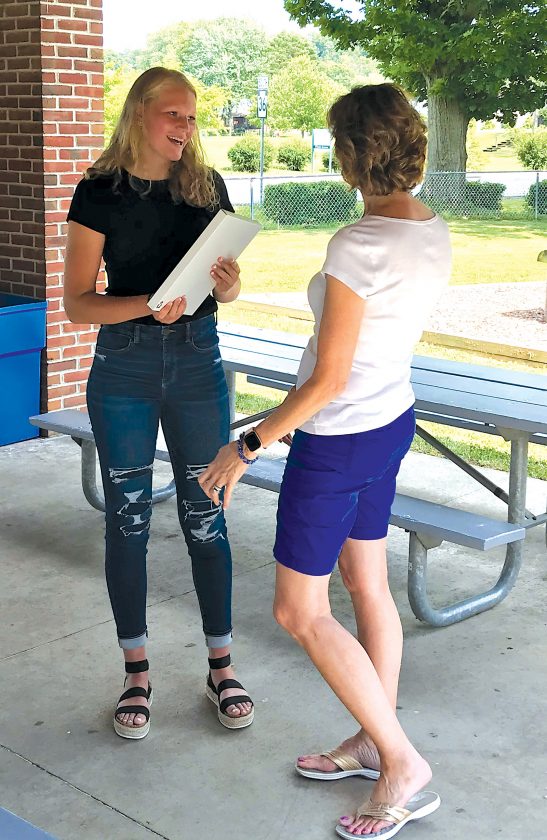 HOLLIDAYSBURG — Alli Campbell has won plenty of awards and broken several records for her play on the court.

Sunday at Blair Regional YMCA, the Bellwood-Antis graduate and incoming Notre Dame freshman, was named the winner of the 20th annual Lynnette Williams Spirit Award for attributes that go far beyond the game of basketball.

Williams died in a car accident in 1999, and the award has been presented annually since 2001 to remember her attitude and dedication to the game of basketball. Campbell was presented the award by Beth Campbell, the mother of Lynnette.

“Alli demonstrates the very same characteristics Lynnette did in her interactions with her teammates, coaches, opponents and of course game officials,” District 6 female officials representative Susan Kovensky said. “She demonstrated it not only in sports but through extracurricular activities.”

The award recognizes leadership and competitiveness — something Campbell did while helping Bellwood-Antis win back-to-back PIAA Class 2A state championships in 2018 and 2019.

It’s also given to someone who demonstrates the teamwork, grit and style Campbell had while dishing off to a teammate on uncontested layups despite going for the county and District 6 scoring record.

It honors dignity, something Campbell practiced the few times the Lady Blue Devils lost during her four years on the roster by never turning down an interview or making sure to praise her opponent.

And finally, Campbell’s academic excellence, another tribute the award recognizes, is evidenced by the fact she was the 2020 Bellwood-Antis salutatorian.

“This award means a little bit more to me than others, because of the values that go into winning it” Campbell said. “Competitiveness, academic excellence, leadership, dedication just to name a few that I know Lynnette Williams possessed. It truly means a lot and is humbling.”

Campbell was also presented a scholarship from Reliance Bank in addition to the award.

Still, Campbell said it’s good to be recognized for something other than what she does on the court.

“This means more than stats, because it’s about you as a person on and off the court,” Campbell said. “It’s about your reactions and your conversations and the way you carry yourself, and that means more to me than any stat line or 3,000 points.”

Campbell will leave for college at the end of July. She will attend the Mendoza College of Business at the University of Notre Dame and major in business analytics and sports management.

“If you look at that list of names on there, it’s pretty impressive,” Campbell said. “It’s cool to see Mary Forr, who went to Notre Dame, Ana Hollen, Karson Swogger and all the other Bellwood girls. Honestly, those are some all-time greats from the area. It’s pretty neat to have my name added to that list, because I know how good of people and players they were.”