Tribute to PIAA quarterfinalists: Seniors add to BC legacy 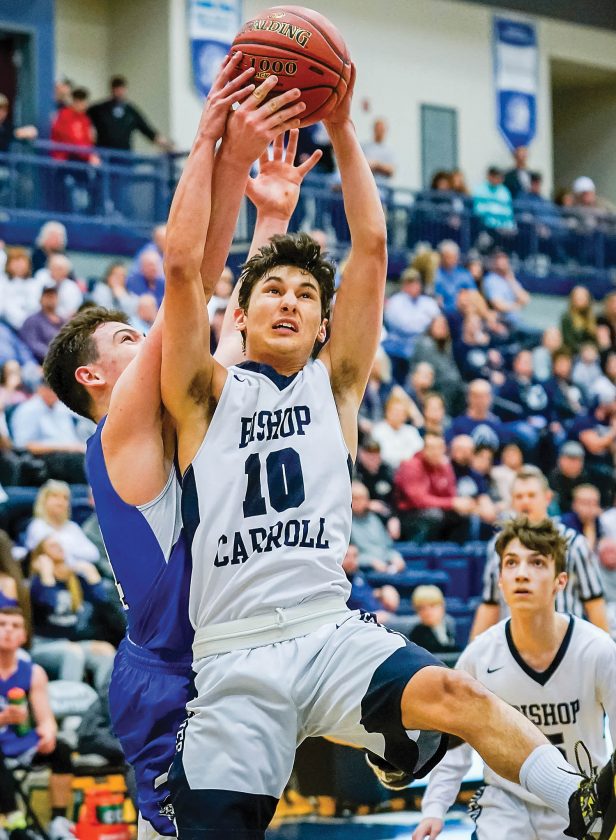 Tristan McDannell fights for a rebound against Williamsburg.

This is the first in a series of six feature stories on the high school basketball teams from the Mirror’s coverage area that made it to the PIAA quarterfinals but had their seasons ended by the coronavirus pandemic.

The star senior, who was just selected to the first team of the Altoona Mirror Boys Basketball All-Star squad for the second time Sunday, made three free throws with 1.6 seconds left to lift the Huskies to a 52-51 victory over Shade in the second round of the PIAA tournament.

McDannell and fellow key seniors Nolan Burk, Scotty Semelsberger and Hamid Rodkey basked in the glory of the victory and the opportunity to play Cornell in the quarterfinals.

After postponing the tournament for a month, the PIAA canceled it Thursday as the world deals with the coronavirus pandemic.

“It was soul crushing,” Burk said. “To go from a game like that and be on top of the world and then the next moment you’re facing the possibility of not finishing and now it’s confirmed. It’s pretty rough.”

The end of the season came at the worst possible time for the Huskies, who wrapped up the year 17-9 with a District 6 Class 1A title under their belt.

“We took our lumps during the season, but we were never really healthy until the right time, the playoffs,” Bishop Carroll coach Cosie Aliquo said. “When we played in districts, we finally got Bart (Kilraine), Nolan, Scotty and Hamid back. Nate (Dumm) had even been out. We were finally getting healthy, and then this hit.”

A 67-47 win over Williamsburg in the district title game meant plenty to a team that had come up just short of the trophy a year before against Juniata Valley when McDannell was unable to play the fourth quarter due to an injury.

It’s clear the Huskies would run through a wall for their coach.

“It’s important to us to keep up the winning standard we’ve had at the school,” Burk said. “It’s about busting your tail every day in practice all year round.”

The dedication from both Aliquo and the players has paid off. Burk announced last week that he would be continuing his basketball career at IUP.

“I really developed my skills at Bishop Carroll, and I have to give the credit to Coach Cosie,” Burk said. “Coming into my freshman year, I wasn’t even sure if I was going to play basketball. He asked me to play, and he really committed to me and helped me become the player I am today.”

Aliquo again referenced the loss to Juniata Valley as a teaching moment for this year’s group of seniors.

“When we lost last year, the day after the last game, they were in the weight room,” Aliquo said. “I’m like ‘wow’ and I told (assistant coach) Mitch (Madonna), we had to get them in there. Sure enough, he got them in there. That’s where it started and we knew how good we actually could be.”

That work ethic led to tremendous strides by each senior.

“Nolan got better and worked harder each year. He found out how good he could really be. Scotty and Tristan were just super leaders who brought it every day,” Aliquo said. “Hamid? We weren’t winning without him. He’s a great ball-handler, another leader and it was just a great group. It makes you sorry to see them go out that way.”