Senior moments: BG vets can only play the wonder game 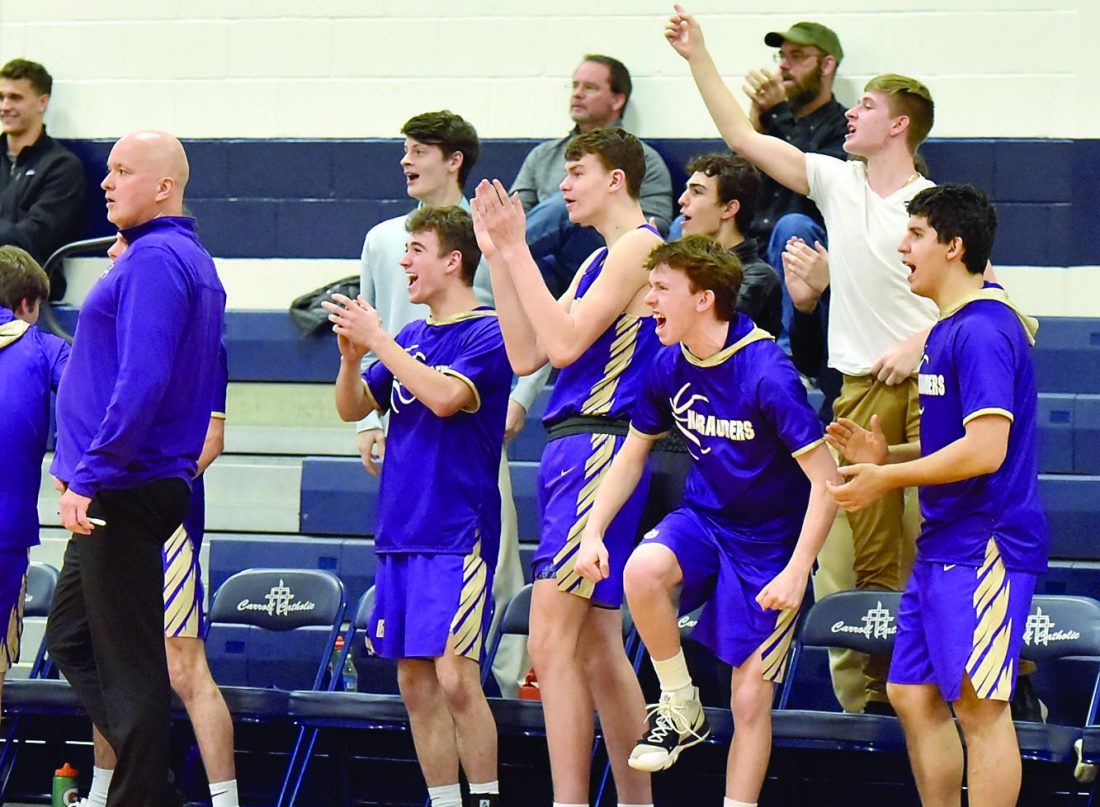 Mirror file photso The Bishop Guilfoyle boys basketball team had plenty to cheer about during the 2019-20 season.

Editor’s note: This is the fifth in a series of six feature stories on the high school basketball teams from the Mirror’s coverage area that made it to the PIAA quarterfinals but had their seasons ended by the coronavirus pandemic.

From the moment the final buzzer sounded and Bishop Guilfoyle Catholic didn’t get a shot off down by two to Math, Civics & Sciences in the 2019 PIAA Class 1A boys championship game, the Marauders knew that they had to get back to the title game.

“There was no doubt we were getting back,” BG senior Jessiah Witherspoon said. “We wanted to prove everyone wrong that said we weren’t the same team as last year. We wanted to get back and win it this year.”

It seemed like nothing could stop Bishop Guilfoyle from a second chance at making history.

The District 6 champion Marauders had just rolled to a 19-point win over Clarion in the second round of the PIAA playoffs and were set to play Sto-Rox, a team they scored 100 points against in last year’s playoffs, in the quarterfinals.

That’s when the world basically shut down thanks to the coronavirus pandemic.

“After our last game, we were talking about the coronavirus and cracking some jokes about how it could be our last bus ride,” Bishop Guilfoyle senior Michael Montecalvo said. “When the announcement came down, my mind went right to that conversation, and I was just in shock. It’s terrible that this ended, and it’s really upsetting.”

The end of the season meant the end of the high school careers of four of BG’s five starters — Witherspoon, Montecalvo, Kyle Ruggery and Will Helton.

“They are an incredible group of unselfish players,” Marauders coach Chris Drenning said. “We were very balanced with our scoring, but if any of those guys played on a different team, they could have scored 20 to 25 points a game. They bought into the philosophy that it didn’t matter who scored as long as we scored.”

Bishop Guilfoyle spent the past year doing everything it could to get another chance at PIAA gold.

“We went to Philadelphia and Pittsburgh and spent all summer going to Greensburg playing games and scrimmaging 6A and 5A teams,” Drenning said. “We did all that in preparation of going back to Hershey.”

On the surface, it appears as though the senior starting quartet were late bloomers, but they didn’t really have the chance to shine early in their careers.

“We didn’t play much before junior year, and we knew that was our time to step up,” Witherspoon said. “We put in a lot of work in the offseason to better ourselves for the team and the school, and it paid off making states last year and having a great season this year.”

Before long, it became clear the senior class was meant to play together.

“Jessiah is a great ballhandler and driver, Kyle is a great shooter, I shoot well and Will shoots well and he’s a good driver,” Montecalvo said. “We all just work so well together, and our games just fit together.”

Drenning was happy with how his team came together defensively down the stretch and said he felt the Marauders had a very good chance at making it back to the PIAA championship game.

“You miss every senior that leaves, but I believe this is the most successful class in the history of Bishop Guilfoyle as far as wins and championships and things like that,” Drenning said. “But as much as I’ll miss them as basketball players, it will be tougher not being around them every day, because they are such a great group of kids.”

Though they didn’t get to finish what they started, the senior class feels like they left a lasting legacy.

“We’ll be remembered,” Witherspoon said. “We were a team that was undersized and nobody looked at as a title contender. We proved that size doesn’t matter, and as long as you have a good team you can achieve whatever you want.”