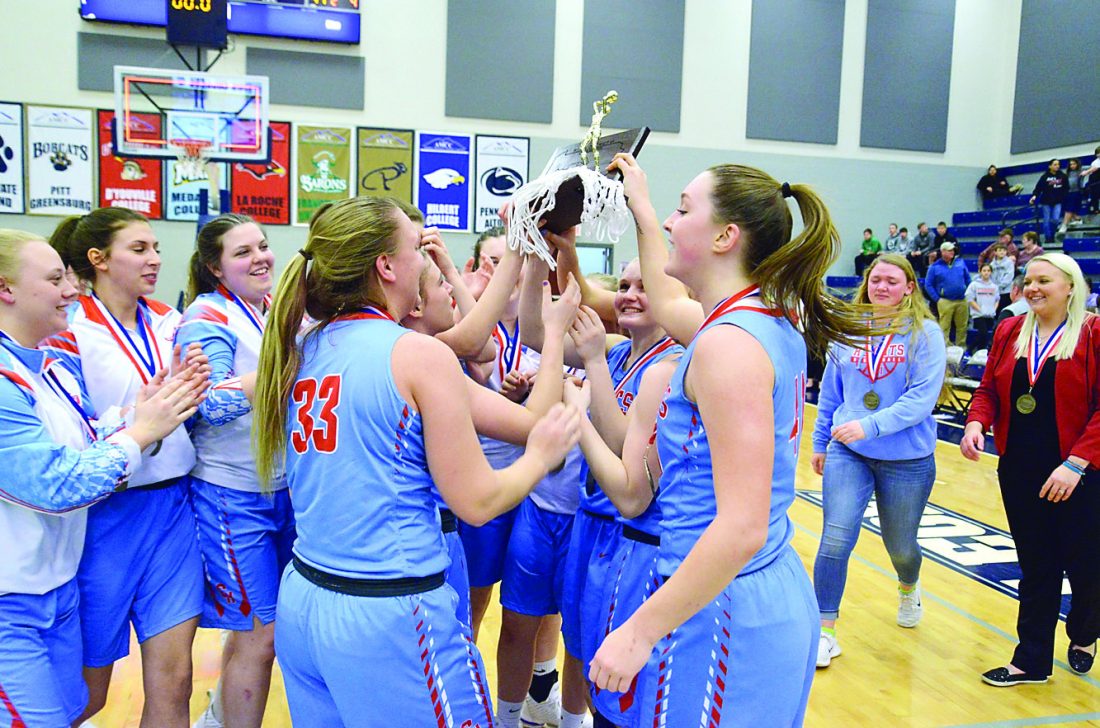 Mirror file photo Cambria Heights won its first District 6 championship this past season for the first time since 1984.

This is the second in a series of six feature stories on the high school basketball teams from the Mirror’s coverage area that made it to the PIAA quarterfinals but had their seasons ended by the coronavirus pandemic.

Then, the Lady Highlanders had to deal with something that has never happened in PIAA history.

With Heights in the quarterfinals for the first time, the PIAA tournament was canceled for the first time due to the coronavirus pandemic. With that, the high school careers of starters Chloe Weakland, Abby Lobick and Emily Henry were ended along with fellow seniors Rachel Bills, Alice Hoover and Brynn Thomas.

“I had the chance to coach these seniors one year in junior high and the last four years at varsity,” Cambria Heights coach Amber Fees said. “They are definitely special. I got to see them grow into incredible young women. They are truly amazing, every single one of them. On and off the court, they are great people who have taught me things, too. I can speak for the whole team, school district and community that they are going to be missed tremendously.”

Cambria Heights finished 25-3 and won its first District 6 championship since 1984.

“It was incredible,” Henry said. “It was everything we had been working for, and for it to happen in our senior year, it was amazing and worth all of the hard work and time we put in.”

The Lady Highlanders have found some success in the regular season over the past few years, but something clicked to make this year special.

“We have played together a lot,” Weakland said. “We grew up a lot mentally. We learned how to work with each other and our strengths on the team and what we all needed to do. This year, it came all together. It’s such a cool way to go out, winning the District 6 title your senior year. Obviously, the way our season ended wasn’t ideal, but looking on the bright side of things, it’s cool to go out with a win.”

It was actually one of Cambria Heights’ three losses that may have helped the Lady Highlanders achieve their postseason success.

“After we lost to Central Cambria in the LHAC semifinal game, that was an eye-opener,” Weakland said. “When we got into the District 6 playoffs, we knew we had to get our stuff together because we were beatable. Once we realized that, we came together as a team and did what we needed to do to win a championship. When we play together, we play great basketball.”

Lobick said when the team’s bond grew, so did their level of play.

“The whole team this year became best friends,” Lobick said. “The majority of the starters have been playing together since elementary school. We know each other, and we really played into our roles this year. That brought everything together.”

In what turned out to be its last game, Cambria Heights defeated Trinity, 53-45, in the second round of the PIAA playoffs. It was the first time the Lady Highlanders had won two state playoff games in the same season.

“When it got postponed, we tried to stay positive and talk and text each other every day because we couldn’t see each other,” Lobick said. “When it got canceled, it just crushed the team a little bit. We were so excited about our season. We were so close, and we all fell in love with the game a little bit more. It was heartbreaking to not be able to finish.”

The end of the season was tougher to accept considering a win over such a quality program like Trinity had boosted the team’s confidence into believing big things were ahead.

“We put so much into this, and we were so excited,” Henry said. “We knew we could win it, really. To have it all crushed was devastating.”

Though the end left a sour taste in the players’ mouths, Fees said the history the team made will live forever.

“It was incredible,” Fees said. “From the very first game this year, we had tremendous support in the community, from our faculty and the students. Every game it got better and better. The atmosphere in our gym was so amazing. We had crowds in our gym that haven’t been there in a very long time. We had people who came out and watched basketball this year who haven’t watched it since they were in high school. That was amazing.”