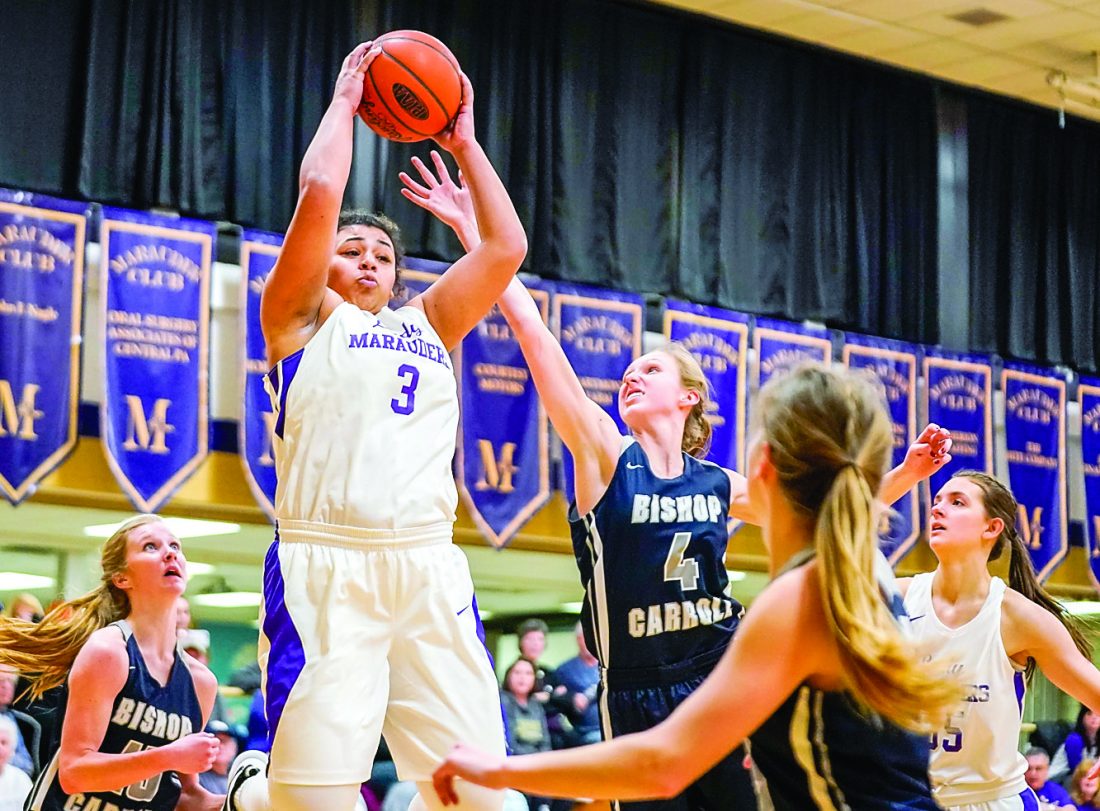 Editor’s note: This is the fourth in a series of six feature stories on the high school basketball teams from the Mirror’s coverage area that made it to the PIAA quarterfinals but had their seasons ended by the coronavirus pandemic.

For much of the season, the Bishop Guilfoyle Catholic girls basketball team looked like a squad on an upward surge that was probably a season away from reaching the heights some legendary BG teams had made it to in the past.

But something changed late in the regular season. Lady Marauders coach Kristi Kaack said after BG won the District 6 Class 2A title that the turning point may have been a couple of late-season losses just before the Laurel Highlands Athletic Conference playoffs.

After those setbacks, senior leaders Jamison Consiglio and Blaise Kilmartin were determined to make sure BG’s time was the present, not just the future.

“They are both everything you would imagine a senior leader would be,” Kaack said. “They were vocal when they needed to be and led by example in practice. Nobody worked harder than Blaise Kilmartin in practice. That kid gave 100 percent to every drill we did. On the floor, no one worked harder than Jamison. They both led by example but also were vocal when they needed to be to keep the team together.”

Inspired by their seniors, Bishop Guilfoyle upset previously unbeaten Forest Hills in the LHAC semifinals and topped Central Cambria for the championship. The Lady Marauders followed that by upsetting two-time defending PIAA champion Bellwood-Antis in the District 6 semifinals and then beating Penns Manor in the championship, a game in which Consiglio and Kilmartin starred.

“Coming off the win over Forest Hills and a win over Bellwood where we won by 13, we were feeling really good,” Kaack said. “Theoretically, you are playing the best team in the state. They won the last two years, and we felt like we were in control the whole game. Then we beat Penns Manor when we thought we were going to win big and didn’t, and that showed the character of this team. We felt like we were on a roll and we had peaked at the right time.”

The Lady Marauders got a pair of wins in the PIAA playoffs over Windber and Mount Carmel to reach the quarterfinals before their dream run was halted by the coronavirus pandemic.

“I was getting messages every day asking if I heard anything or if I knew when the PIAA would make a decision,” Kaack said. “They wanted to know if we could play in the summer. They were so hungry to get back on the floor. A couple of them have already said to me after we got the message it was canceled that they were already starting to work for next year.”

But for the senior group, they won’t get that chance at the big goals they dreamed about.

“Winning the state championship was one of our goals,” Consiglio said. “At the end of the season, we felt like we could beat anyone. Still, our season was really special, because we hadn’t really won that much (the past three years). We went from that to winning the Laurel Highlands, beating Bellwood and winning D6. It was such a fun ride.”

Bishop Guilfoyle returns four of its five starters next year in Teresa Haigh, Sophia Warner, Leah Homan and Aurielle Brunner. Dani Scipioni, one of the first players off the bench, will also be back.

“Next year, we’re going to be super excited to play again after this all happened,” Haigh said. “We want to go back and win a state title. We want to continue what we started.”

Though the senior class from this year will not be a physical part of next year’s team, they’ll be on the minds of the Lady Marauders who will be back to pursue that elusive state title.

“All of our seniors were such good leaders for us,” Haigh said. “They really set the way and motivated us every practice. We’re going to be even more motivated next year, because we’re going to want to win it for them since they didn’t get the opportunity to finish it out this year.”