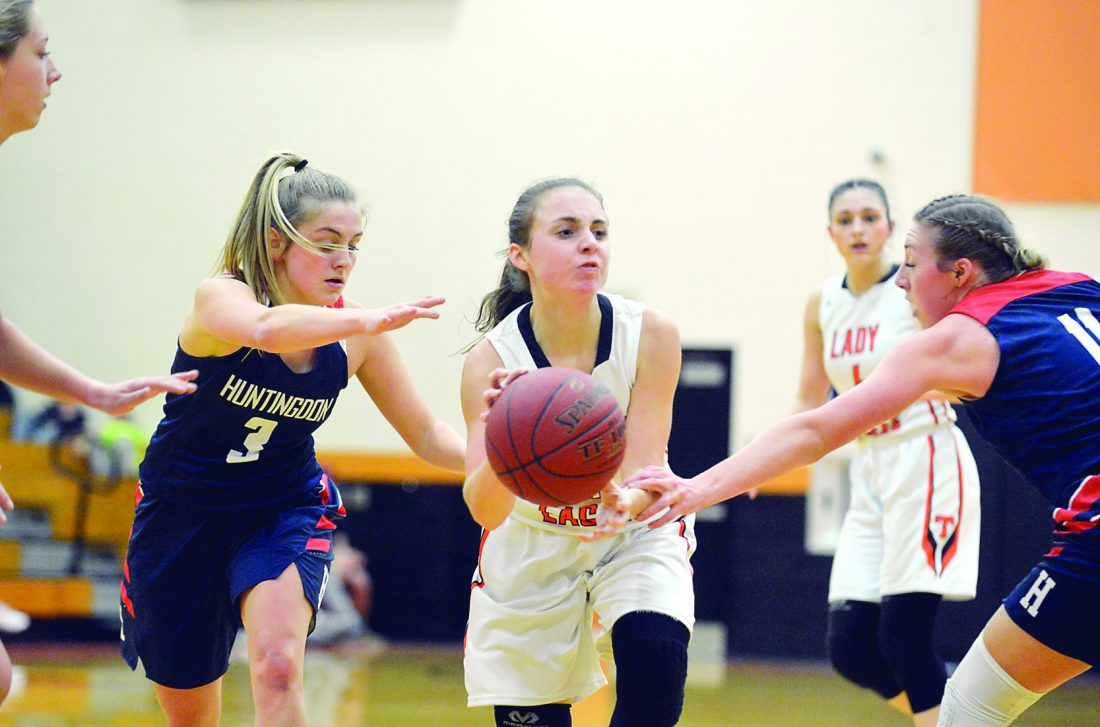 Mirror file photo Stephanie Ramsey was a big part of the Tyrone girls basketball team this past season.

This the third in a series of six feature stories on the high school basketball teams from the Mirror’s coverage area that made it to the PIAA quarterfinals but had their seasons ended by the coronavirus pandemic.

The Tyrone girls basketball team won more state playoff games in 2020 than it had in its entire existence.

The Lady Eagles had their eyes on even more with a quarterfinal game against Beaver looming and a possible District 6 championship game rematch with Cambria Heights in the semifinals.

But before any of that could happen, the coronavirus pandemic put a stop to sports across the world, including the PIAA tournament.

“I took it pretty hard, because we accomplished so much,” Tyrone sophomore Jaida Parker said. “We won the Mountain League, got to the district final and made a nice run in states. It’s hard to see it end early when we could have done something more.”

Tyrone finished the season 22-4 with a pair of victories in both the District 6 and PIAA playoffs. Prior to this season, the Lady Eagles had been 1-7 all-time in the state playoffs.

“Looking back, I think this team really grew after each loss this year,” Tyrone coach Luke Rhoades said. “That shows that they really matured as the season went on and really developed an identity of their own. They really showed a lot of character.”

The Lady Eagles lose only one senior, Lindsay Fusco, but not getting to see Fusco end her career on the court was tough for her younger teammates.

“I feel terrible for her,” Tyrone sophomore point guard Stephanie Ramsey said. “For us to experience the success that we did and for her to bring the leadership that she brought was so big. She was a main leader on our team, especially with her defense. I feel like she deserved the chance to finish it out.”

The sudden stoppage of play has left Rhoades with many questions.

“We still haven’t had a chance to have a wrap-up meeting, which is tough,” Rhoades said. “We haven’t been together since the Thursday when the PIAA originally postponed it for two weeks (March 12). I’m anxious to see where we are when we get back together. I’m hoping the girls are hungry. The taste of success we experienced in the two state playoff games, and even the entire playoff run besides the Cambria Heights’ loss, was great for us. I think we were playing some really good basketball. Hopefully that makes us want bigger and better things.”

Beyond Parker and Ramsey, who both starred as freshmen, Tyrone developed several other players this past season.

“Jaida and Stephanie were major contributors to our team last year,” Rhoades said. “But what I was really excited about was the way Emma Getz came on this year. She was outstanding. Shannon Shaw shot the ball very well, and late in the season, freshman Kayelin Gibbons became a key factor. She was hitting her stride, and you saw a lot of growth with her.”

Unlike many of the other teams that made the PIAA quarterfinals from the Mirror’s coverage area, the Lady Eagles will return the majority of the talent that got them that far. However, the coronavirus’ continuing impact on canceling practices and potentially summer leagues could stunt the team’s growth.

“Everyone is in that situation, but from a coaching perspective, I’m concerned,” Rhoades said. “I know where this team could grow if we have the opportunity to continue to grow on the improvements we made last offseason, but with all the uncertainty, it makes you concerned. We don’t know when we’ll be back, and it puts a lot on the athletes. They need to be out on their own. There’s stuff you need to be doing at home, and the ones that do that are going to be the ones you see the most improvement from.”

Parker, who was selected to the second team of the Mirror’s All-Star squad Sunday, said Tyrone is dedicated to working hard despite the conditions.

“We’re all individually working on the things we need to work on,” Parker said. “I know once the season comes around, we’ll work so hard to get back to where we were since we didn’t get the chance to finish this year.”

Ramsey is hoping the improvements the team made from last year to this year continue.

“We knew from our freshman year what we needed to improve on,” Ramsey said. “Having a whole season helped, and after playing this year, we know we can improve even more as juniors.”