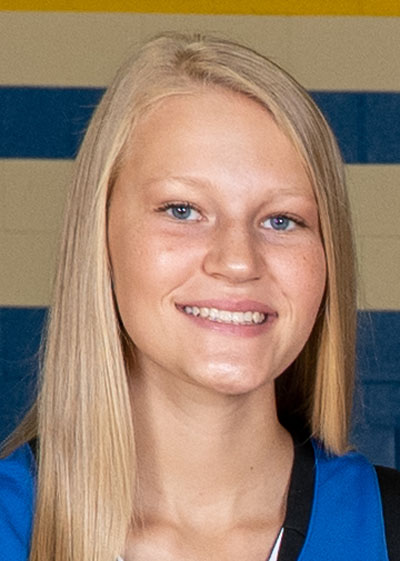 The Bellwood-Antis senior made an all-state team in all four seasons with the Lady Blue Devils, as she made the second team after her freshman year.

“It’s an honor to win PA player of the year for the third time now, but it wouldn’t have been possible without my teammates and coaches and the success we have had over these past few years,” Campbell said. “I’ll remember those teammates, coaches and the community we’ve had. I’ll remember the wins and the memories. I won’t remember the stats, the points and everything like that. I’ll hold on to the memories we made and those two state championships. That’s pretty special.”

Campbell finished this season averaging 28.3 points, 8.3 rebounds and 4.6 assists per game. She finished her high school career with a Blair County and District 6 record 3,019 points and also had 964 rebounds, 534 assists, 477 steals and 177 blocks as the Lady Blue Devils captured PIAA championships in 2018 and 2019.

The Notre Dame signee, who confirmed to the Mirror when contacted Wednesday that her intention was still to go to the school despite women’s basketball coach Muffet McGraw’s resignation Wednesday, was joined on the first team for the second consecutive year by Juniata Valley’s Halee Smith and Everett’s Kaitlyn Maxwell.

Bishop Guilfoyle Catholic coach Kristi Kaack also claimed top honors in Class 2A and was named the classification’s coach of the year despite missing part of the season to have a baby. Kaack returned in January and helped the Lady Marauders win a District 6 title and a Laurel Highlands Athletic Conference championship.

“I feel overwhelmed and excited at the same time,” Kaack said. “For me, it was definitely a collective effort with my husband Adam helping when I was out having a baby and Rich (Consiglio) and Christine (Conrad) my assistant coaches, who were wonderful and spent a lot of time scouting. I’m really appreciative for the group that we have.”

After losing to Smith and Juniata Valley earlier in the season, Bishop Guilfoyle rebounded to beat previously unbeaten Forest Hills in the LHAC semifinals and Bellwood-Antis in the District 6 semifinals before topping Penns Manor for district gold in overtime.

Smith, who will continue her basketball career at Division I Quinnipiac, was also honored for the fourth straight season. She made the Class 1A first team in 2018 and the 1A third team as a freshman. Juniata Valley finished as the runner-up in the state both years.

Smith’s senior campaign was cut short due to a late-season injury that forced her to miss the playoffs.

“I’m honored to make it with all the talent that’s around the area,” Smith said. “I work hard for it, just like everyone else. Being recognized all four years is such an honor. I never really worked for individual goals. I always wanted team goals like a state championship, but of course with everything going on this year, no one was able to make it that far, so this helps soften not reaching the team goal a little bit.”

Maxwell helped Everett win the District 5 Class 2A title for the second year in a row. She made first team all-state as a junior when the Lady Warriors made it all the way to the PIAA semifinals.

“It’s very exciting,” said Maxwell, who will continue her basketball career at Division I Saint Francis. “It’s a very humbling way to wrap up my high school career. It’s due to all the hard work my coaches, family and teammates put in. Without them, I couldn’t have this honor.”

Campbell’s teammate at Bellwood-Antis, Sakeria Haralson, was also honored for the second year in a row. Haralson, a Division I Monmouth signee, moved up from the third team as a junior to the second team this season.

“I’m really proud of Sakeria,” Campbell said. “We have all pushed each other so much this past year and made each other better as a team. That’s why these awards are possible.”

Bishop McCort’s Bella Hunt, who will play at Division I Mount St. Mary’s, also landed on the second team despite missing most of the season with an injury.

Teresa Haigh, who averaged 15.7 points per game for Bishop Guilfoyle during her junior season, was the only underclassman from the Mirror’s coverage area to be honored. Haigh landed on the third team.

“I’m really happy for Teresa,” Kaack said. “She’s a kid that’s constantly asking what she can do to get better. She spends countless hours in the gym, and it’s nice to see her being rewarded for her hard work.”

The Class 1A girls team was also announced Wednesday. Kennedy Catholic’s Malia Magestro was named the top player, and Jenkintown’s Jim Roman was selected as the coach of the year. Roman coached Jenkintown to a PIAA title over Juniata Valley in 2018.