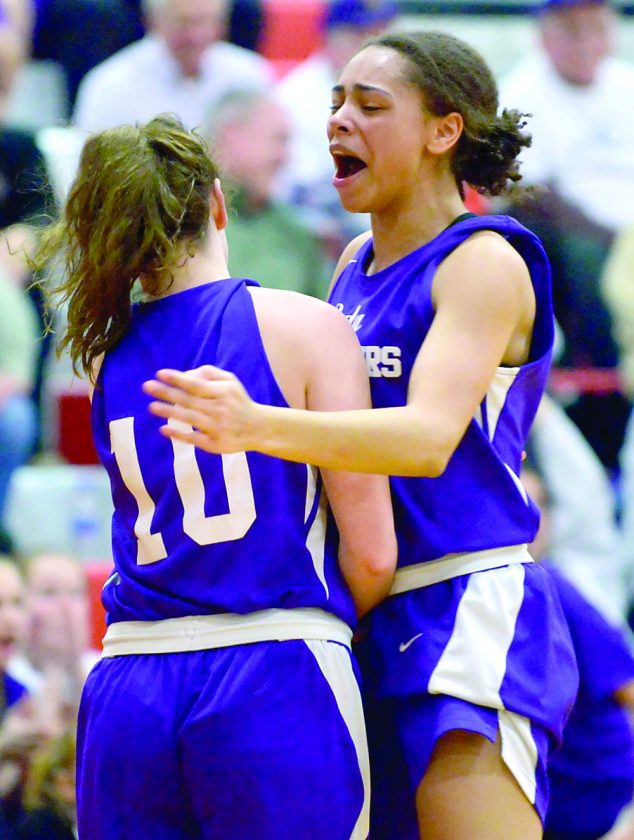 BELLEFONTE — Bishop Guilfoyle Catholic’s Teresa Haigh was a little late coming out of the locker room at halftime and started the third quarter on the bench.

She must have mistaken how hot her hand was for a fever.

The junior drilled eight 3-pointers, six in the first half, and finished with 26 points in the Lady Marauders’ 51-40 triumph over District 4 champion Mount Carmel Tuesday in a PIAA Class 2A second round contest.

“I was feeling a little sick for a second,” Haigh said. “I’m feeling great now. It was a great win.”

Mount Carmel jumped ahead 7-3 early, but then Haigh got hot. She had 18 points at the half, including a 3-pointer in the final minute to give Bishop Guilfoyle a 27-20 lead halfway through.

“She’s a tough guard,” BG coach Kristi Kaack said. “If you give her an inch, she’s going to find a way to get a shot off. It was her night tonight. She shot the ball extremely well.”

The Red Tornadoes played about even with BG in the second half but could never really put any pressure on the lead. Haigh’s final 3-pointer, with 3:15 left, put the Lady Marauders up double digits for the remainder of the game.

“They were pretty consistent,” Mount Carmel coach Lisa Varano said. “We saw them on tape. They are a very good shooting team. We were hoping at some point they would go cold, but that just didn’t happen.”

Leah Homan finished with 11 points, and Sophia Warner added nine points for Bishop Guilfoyle, which will play Old Forge, a 67-51 winner over Steelton-Highspire, Friday in the quarterfinals.

Mount Carmel got 13 points and 13 rebounds from Dani Rae Renno, but the star center didn’t score until midway through the second quarter when the Tornadoes were already down by 10.

“People kept asking how we were going to contain her, and all I said was Jamison Consiglio,” Kaack said. “We gave her a little help, but that kid was unbelievable down low on her tonight. She forced her away from the hoop, which is all we asked her to do.”

Haigh’s big game came after she scored in single digits the last two contests. Kaack said her team’s ability to have someone else shine each night is important.

“We are such a tough team to play, because one through five anyone can go off and have a big night,” Kaack said. “The little stuff you won’t see in the papers is Aurielle (Brunner’s) defense up top. She was fantastic on the ball. Sophia Warner controls the tempo for us, and we have a lot of kids who play their role. We’re great as a unit.”

The Lady Marauders now find themselves just two wins from Hershey and a chance to play for a state championship. Four of the eight teams left alive in the PIAA Class 2A bracket are from District 6 (BG, Penns Manor, Bellwood-Antis, Bishop McCort).

“The best we can do is give them the most we can on the teams we are playing,” Kaack said. “We scouted, gave them plays, and our kids defended them perfectly. We prepare them, but they do the hard part. They get it done on the floor.”