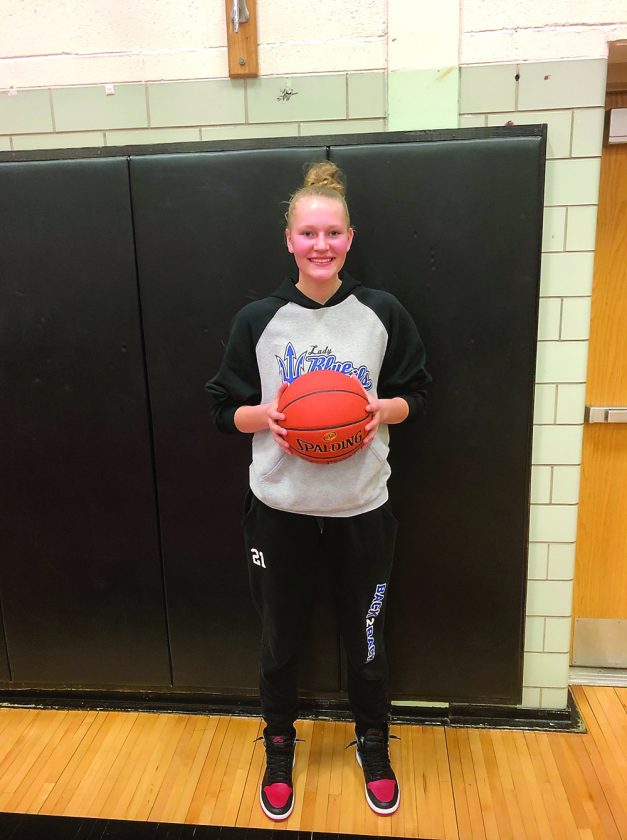 Alli Campbell holds the ball with which she scored her 3,000th point of her career Tuesday night. Courtesy photo

DuBOIS — The Redbank Valley girls basketball team played with two-time defending state champ Bellwood-Antis for most of the first half Tuesday night in a PIAA Class 2A second round game.

However, Lady Blue Devil Alli Campbell and company proved to have too much firepower as they eventually ran away with an 83-54 victory to advance to the quarterfinal round this Friday night.

And in the victory, Campbell made state history.

The teams battled back-and-forth for a quarter and a half with the District 9 champion Lady Bulldogs, holding a 25-24 lead with 5:35 left in the first half. That’s when Bellwood (26-2) and Campbell, a Notre Dame signee, took control of the game.

Campbell scored of 11 of her game-high 35 points during that closing stretch to help give her team some breathing room at the break.

The Bellwood senior made history during the run, as a hoop at the 3:40 mark made her just the 10th girl in Pennsylvania to ever reach 3,000 points to extend what is already District 6’s all-time record. She entered the game needing 16 points to reach the milestone and now sits at 3,029.

The Lady devils then ran away from Redbank Valley in the second half, outscoring the Lady Bulldogs 41-23 to win going away.

Campbell added 10 rebounds, 10 assists and seven steals to nearly record a quadruple double on her historic night that propelled Bellwood in the state quarterfinals.

She was far from the lone Lady Devil to have an impact in the game, as teammate Emilie Leidig scored 22 points. The senior duo combined to hit nine of Bellwood’s 12-pointers on the night.

Fellow senior Sakeria Haralson, a Monmouth recruit who entered the game nursing an injury, provided a spark off the bench late in the first quarter despite scoring just three points,.

“When you stop and think bout the state of Pennsylvania, she’s the 10th girl to ever get 3,000, and she’s the 14th player overall. That’s pretty impressive, and it certainly puts her in a very elite group of kids that have played this sport in this state.

“She’ll be the first one to tell you she couldn’t do it without the other kids she playing with though. She’s a very humble kid, and a very hard-working kid. And, I’ve said it a million times, she’s wired differently than most kids. She just has a fire that burns in her that she refuses to lose.

“I was actually going to go over and pay their student body to start chanting overrated because that gets her going. So, as soon as I heard that first overrated chant and she made that first three and looked at them, I knew we were going to be okay.

“She’s a once in a generation player, and I hope I watch her play for three more games.

While the game ended as a lopsided affair, it was anything but in the first half. Redbank jumped out to an early 5-3 lead behind, but a pair of Campbell 3-pointers put Bellwood up 6-5. Neither team led by more than four points until late in the quarter when Bellwood used a 7-0 spurt to grab a 21-14 lead. Leidy jump-started that lead with a trey.

Redbank countered with a 7-0 run to open the second quarter, getting four points from its leading scorer Tara Hinderliter and a trey by Lauren Smith. The two Redbank seniors finished with 14 points in their final games. That gave Hinderliter 1,401 for her career.

The teams traded scores from there in the middle of the quarter before Bellwood used its big push to end the half to seize control of the game. The Lady Bulldogs were never able to bounce back from that closing run, as Bellwood used a 25-8 third quarter to all but put the game away.

Campbell and Leidig combined for 15 of those 25-third quarters points as both netted 14 in the second half. Macy Decker and Jaidyn McCracken added eight and seven, respectively, for the Lady Devils. Decker hit two 3-pointers on the night and McCracken one.

Next up for Bellwood is District 6 runner-up Penns Manor, which knocked off District 10 champ West Middlesex, 46-39, Tuesday night.