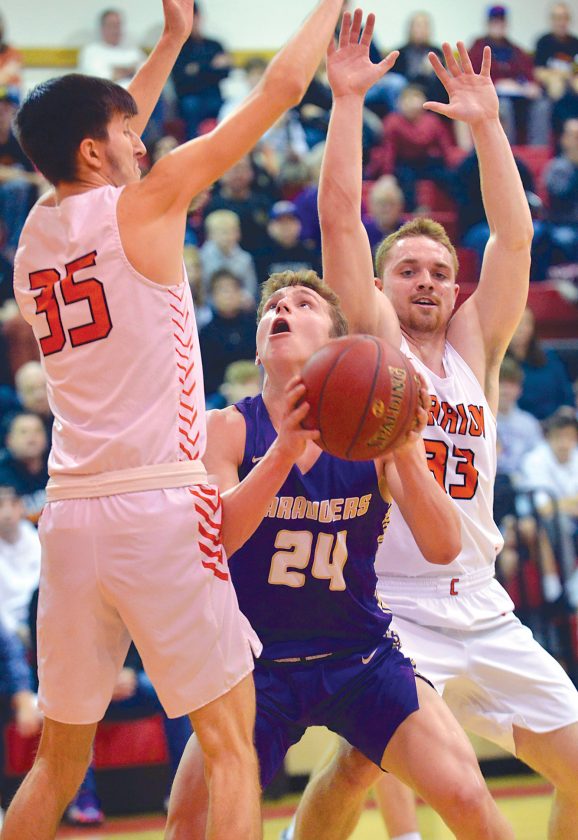 PUNXSUTAWNEY — You know you have a good team when you can win a second-round state playoff game by 19 points, in a contest that was never in doubt, and still feel like you didn’t play all that well.

“I didn’t think we played great, but the shots were falling, which was good,” Marauders senior Will Helton said. “We executed well enough where we could keep it out of distance from them.”

Helton buried three of his five 3-pointers in the first quarter as BG jumped on Clarion and never looked back. The Marauders cruised to a 66-47 victory at Punxsutawney Area High School to move on to the third round of the PIAA Class 2A tournament Saturday against Sto-Rox.

“We played really hard, but I thought we were loose with the ball,” Drenning said. “(There were) some turnovers and stuff when we knew what was coming and we had worked against it, especially in the first half.”

The Marauders overcame some of their shaky play and still led at the half, 32-21. They looked more crisp in the third quarter, stretching the cushion to 50-34, and led by as many as 20 down the stretch.

The fact that BG’s mistakes came in an easy victory, at this important time of the year, gives Drenning a chance for some key coaching moments.

“It’s great for a coach because you have things you can show in film (today) that we can improve this and this and what we need to do here, and yet you can do that coming off a win rather than something that ends your season,” Drenning said.

The Marauders, who lost in the state state title game last year, can be a little tough on themselves because they’ve already set such a high standard.

“My bar is really high,” Helton said. “We said at the start of the season that we were going to go as far as we can. And even if we aren’t playing great, we’ve just got to keep on scrapping.”

Helton drilled back-to-back 3-pointers from the same spot on the left wing to give BG a 6-0 lead just moments into the game. Helton buried another trey, and Patrick Haigh hit one in the quarter, as well, for a quick 20-12 lead.

Clarion coach Scott Fox said he came into the game with a strategy against BG’s dynamic offense, but it just didn’t work.

“They’re tough, and they’ve got some size,” Fox said. “The goal is make them shoot, beat us by shooting, and they shot well. They’ve got lots of good shooters. Good team.”

Helton led BG with 19 points, while Jessiah Witherspoon had 17 and Kyle Ruggery 11. Witherspoon scored nine points in the third quarter as the Marauders pulled away.

Cal German led Clarion with 14 points and was the only Bobcat in double figures. Josh Craig and Beau Verdill added nine points apiece.

Clarion did some things defensively to disrupt BG and force some chaotic action, but the experienced Marauders proved once again that they can win any type of game against any type of opponent.

“The goal is to hopefully weather the storm at the beginning and then hopefully their legs wear out at the end,” Fox said of his strategy. “But they rotate enough guys to where it’s not going to really affect them later on in the game.”

This is a motivated BG team that’s getting contributions from a lot of different players, and the club clearly has big goals. But the group knows there’s always room for improvement.

“Our expectations are, we’re just trying to win the next game,” Drenning said. “But having gone to the state finals last year, our guys, that’s what they want again, and anything less than that would be a disappointment.”