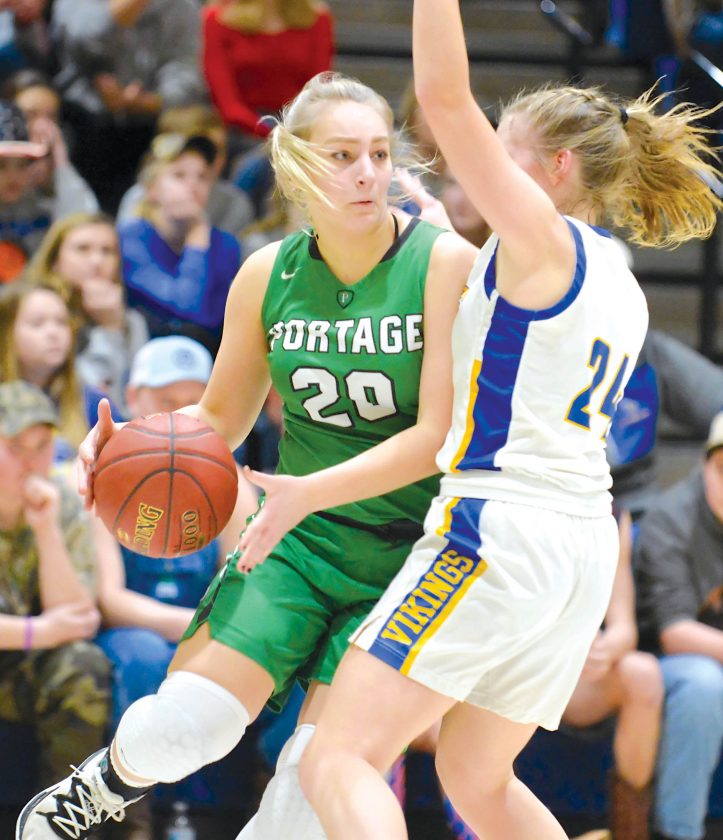 JOHNSTOWN — Portage jumped out to a 14-point lead just minutes into the second half of its WestPAC championship and, at that point, looked like it could put the game away.

However, Shanksville-Stonycreek, which didn’t sub the entire game, got its second wind when one would think it should have been getting worn down.

The Lady Vikings went on a run to pull within four points heading into the final quarter before the Lady Mustangs kept composed and converted their free throws down the stretch to claim a 56-48 victory on Friday night at the University of Pittsburgh at Johnstown’s Sports Center.

“I loved our patience down the stretch there in the last five minutes,” Portage coach Lance Hudak said. “We were in a foul shot/layup mode at that point. Our Achilles heel all year long has been foul shots … So, it’s so refreshing to win this game at the foul line.”

“I never worried because I have faith in our girls so much,” Portage’s Kara Dividock said. “We work so well together. Just knowing that, I know that that’s (giving up a run) not going to bother us.”

With 5:47 showing on the third quarter clock, the Lady Mustangs’ Sydni Sossong drilled a 3-pointer, her only points of the night, to extend the lead to 44-30 — which tied the largest lead of the night.

The Lady Vikings appeared to be tired as all five players looked to be out of breath. However, their play for the remainder of the stanza proved otherwise.

“That’s what I told them in the locker room. I feel like in years past, we would’ve given up, we would’ve quit,” Shanksville-Stonycreek coach Cory Crognale said. “This team is just different. They battled, they scrapped … We finally got some stops, and we started executing our offense and fighting back. It was just a little too little, too late.”

Shanksville (19-4) dug deep and closed on a 13-3 spurt as Allie Ziegler hit a pullup to kickstart the burst.

Rylee Snyder, who tallied a team-high 20 points, Josie Snyder, who finished with 14, and Hannah Platt, the lone senior, contributed points during the run.

“(At halftime), I said, ‘Let’s come out, let’s value possessions, let’s take more time off the clock and wear this team down,'” Hudak said. “But, it’s basketball — it’s sports. We came out and we turned the ball over, we stopped making shots, and they (Shanksville) started making shots.”

Abbi Riskus, who recorded 11 points for Portage, notched the only points during the span when she made a driving layup while being fouled. The senior hit the and-1 attempt to complete the play.

Portage began the final quarter up 47-43, and while neither team made a field goal in the quarter, the Lady Mustangs went 9-of-10 from the free throw line to close out the game.

Dividock, who registered a game-high 21 points, made 7-of-8 from the charity stripe, while Lauren Shaffer made a pair late that set the final with 10.7 remaining.

“It’s pressure for sure, but Coach Hudak prepares us well, and that really helps,” Dividock said. “I had no doubt that I was going to make them.”

The Lady Mustangs, who canned seven 3-pointers in the opening half, never trailed as Dividock hit a deep trey in the right corner to put her team in front at 6:59 of the first quarter, which Portage ended up 15-8.

Portage received eight points off the bench from freshman Arianna Wozniak during the second quarter run that helped her team get and keep the double-digit lead.

Both teams will be off until they begin district playoff action next week.

“Last year, we sort of backed into it (district playoffs). We sustained some injuries, and we weren’t playing great basketball — you don’t have confidence out there,” Hudak said. “We’re not backing in this year. We are playing at a high level. We’re getting better when you need to.”