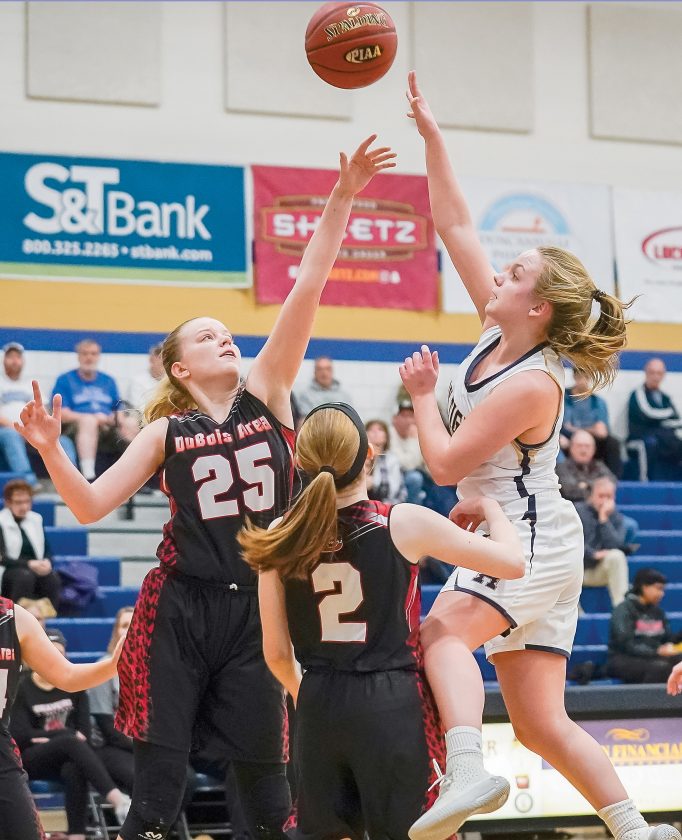 Photo for the Mirror by Chuck Meyers Hollidaysburg’s Alyssa Bell puts up a shot over a pair of DuBois defenders during Wednesday night’s win.

HOLLIDAYSBURG — Marin Miller kept Hollidaysburg afloat in the first half of its District 6-8-9 Class 5A semifinal victory over DuBois Wednesday by scoring 16 of her team’s 22 points — including a 3-pointer from beyond half court at the end of the first quarter.

Her teammates took it from there after the Lady Beavers cut the lead to six to begin the second half.

Freshman Sydney Lear scored six of the Lady Tigers’ next 12 points that helped double the lead in an eventual 62-36 Hollidaysburg win. The victory moved the Lady Tigers into the District 6-8-9 championship game against Portage on Saturday at Mount Aloysius at noon, and it also clinched a spot in the 5A state playoffs.

“From Sydney Lear to Ali Hatajik, Alyssa Bell hit some big shots, and Morgan (O’Neill) got to the rim,” Hollidaysburg coach Deanna Jubeck said. “I think each and every kid that went into the game did their job and played their role like we have been asking them this past week.”

Miller finished with a game-high 29 points and helped Hollidaysburg go 20-for-24 from the foul line in the game. Lear scored 12 points.

DuBois also went to the line 13 times and made seven, but DuBois coach Keith Kriner said the differences between District 9’s style of play and District 6’s was evident.

“We try to tell our girls, we don’t play basketball like this in District 9,” Kriner said. “It’s a very physical game in District 6, and a lot of times, our girls will think they are getting fouled, and it would probably be called a foul from where we’re at, but down here it isn’t. We told them to play through it and be strong with the basketball. That’s what turned the tide. When they turned up the heat physically, they pulled away from us.

“We would get a rebound, and they would rip it out of our hands. We had a lot of turnovers in the third quarter.”

“We hang our hats on defense,” Jubeck said. “We want our defense to bring our offense, so we felt like if we could pressure the basketball and get some transition points, that could get us going in the second half.”

Hollidaysburg already owns a victory over its championship-game opponent. The Lady Tigers defeated Portage, 60-48, at Saint Francis on Jan. 25 in a game Miller’s free throws allowed them to pull away.

Hollidaysburg may also get Allison Hileman back in the starting lineup, though Jubeck would not confirm that she’d be available following Wednesday’s win.

“We have to play Hollidaysburg basketball,” Jubeck said.